Challenges of Climate Change: FYR Macedonia’s cities, especially Skopje, are sprawling, losing density and adding to their share of per capita emissions. The main sources of increased urban emissions are the growing number of urban single family houses that use wood for heating and cooking, and the growing number of private cars for commuting.

Sprawling also drives up the cost of public service delivery and pushes down their quality. Interrupted and irregular service deliveries constitute one of the key municipal challenges, since networks such as transportation, water and sanitation, solid waste collection, roads and street lighting need to be expanded in areas with lower density.

Rising air and water pollution from wastewater and solid waste from run-down sector assets as well as unacceptable waste collection and disposal practices need to be addressed too.

Opportunities for Green Actions: More than two-thirds of FYR Macedonia’s population resides in cities, and rural-to-urban migration is rising. To harness their potential to achieve improved growth coupled with reduced emissions, cities should focus on urban form and local service delivery. Generally, cities with a dense urban mass tend to have lower energy intensities and fewer emissions than sprawling cities.

A compact city promotes energy efficiency in different ways: an apartment in a multi-story building has a lower footprint than a single detached home, as heating and cooling are shared between apartments. It is also easier and more cost-efficient to provide and maintain public service systems, such as public transit.

The government can decrease urban sprawl by developing integrated urban plans and providing incentives for citizens and businesses to stay in the core city. This would involve planning across departments in city administration and better enforcement of existing planning regulations: building permits, parking zones and business licenses. 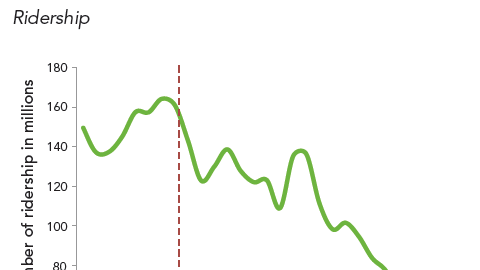 With decreasing urban density, public transportation networks became less economical and had to reduce coverage, leading to a rise in private car ownership and increasing the carbon footprints of the transport sector and cities. Between 2006 and 2010, the ridership of urban public transport shrank by 100 million people.

Cities can also be improved by practical interventions such as establishment of integrated regional waste management systems and expansion of energy efficiency programs, which can be facilitated with better dissemination of pilot experiences and information about financial instruments.

In addition, investing in water network rehabilitation and metering would help reduce losses and increase cost recovery, addressing the issue of urban service deterioration and optimizing public resource use for green growth.