Challenges of Climate Change: Although agriculture does not contribute much to the overall emissions in FYR Macedonia, its high share in the economy, the sectoral inefficiencies and limited water availability make the country highly vulnerable to climate change. Agriculture and agro-processing may employ almost one-third of the labor force, but crop yields and agricultural incomes will likely drop in the coming years.

As Macedonia becomes drier and hotter, both water scarcity and water demand for irrigation are predicted to rise. Irrigation is already insufficient and poorly designed for today’s small farms. Many farms depend on local wells and unsustainable extracted groundwater, which is neither regulated nor priced. Soil fertility problems will also worsen with a changing climate, especially erosion.

Small and fragmented farms and inadequate land markets limit agricultural productivity, while government subsidy programs are poorly designed to achieve their stated objectives. Most small farms are unable to achieve production economies of scale nor obtain the quantity needed to reach the most profitable markets.

To increase agricultural productivity and competitiveness in the European and Middle Eastern markets, government expenditure on agriculture grew 44-fold during 2006 and 2012. However, the structure of the agricultural subsidy program encourages preservation of small farms since farmers receive direct subsidy payments, creative incentives for smallholders to hold onto their property even if unused.

Opportunities for Green Actions: A more competitive, export-oriented agriculture sector in future decades will be possible only if adequate policies and investments are implemented to contain irrigation demand while improving irrigation and overall sector efficiency and resiliency. 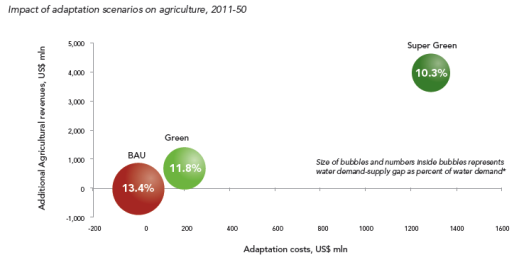