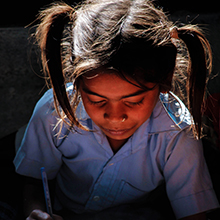 The World Bank In Nepal

Nepal is undergoing a historic transition toward a federal and secular republic. This represents a window of opportunity for the country to further reduce poverty, increase the income of the bottom 40 percent, and pursue its ambitious agenda of inclusive growth and accountable service delivery.

Nepal: Commitments by Fiscal Year (in millions of dollars)*