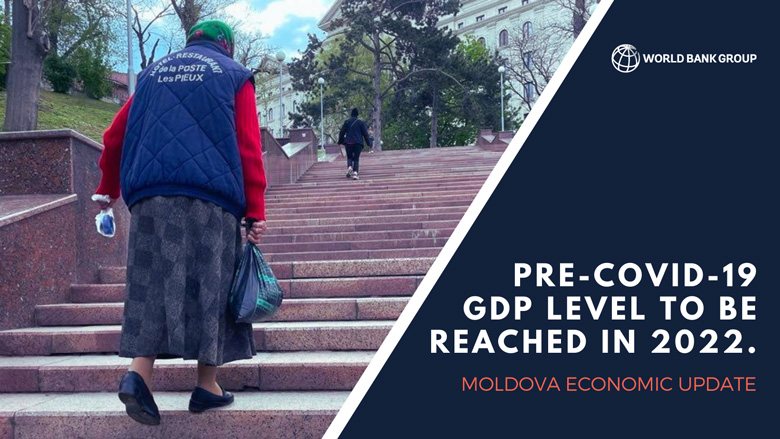 The economy has gained some momentum on the back of the easing of COVID-19 restrictions. Affected by the pandemic and a severe drought, economic activity plummeted in 2020, with GDP declining by 7 percent. The main drivers of GDP decline were household consumption, which also declined by 7 percent, followed by investment and inventories. On the supply side, the lockdown measures have halted trade and industrial production while a severe drought has impacted agriculture. Employment dropped to a five-year low. In 2021 the economy has started to rebound gradually, but most of the short-term indicators remain in negative territory.

The monetary stance remains loose. On the back of falling oil prices and weak domestic demand, inflation averaged 3.8 percent in 2020. In response, the National Bank of Moldova (NBM) has maintained the policy rate at a record low of 2.65 percent since November 2020 while the reserve requirement ratio in Leu was reduced to 26 percent from 42.5 percent in 2019. Driven by higher food prices, inflation picked up in 2021, but it still remains below the lower band of the NBM corridor of 5 percent (+/- 1.5 percent).

A large import compression, together with relatively stable remittances, has led to an improvement of the current account deficit (CAD). In 2020, lower energy prices and weak domestic demand have resulted in a contraction in imports by 10.5 percent, which has compensated the decline in the volume of exports (-11.5 percent) and in remittances (-0.4 percent). As a result, the CAD has narrowed to 6.7 percent of GDP from 9.3 in 2019. The deficit was mainly financed by deposits and cash holdings and debt instruments, predominantly public. External debt reached 70.1 percent of GDP, 8 percentage points (pp) higher than in 2019. Foreign reserves are at a 15-year high of US$3.7 billion.

The fiscal stance remains challenging. From the pre-COVID-19 level, tax revenue increased by about 0.3 pp of GDP while spending increased by 4.1 pp of GDP. As a result, the fiscal deficit reached a ten-year record of 5.1 percent of GDP in 2020 (including a 1 pp increase in the cash balance). In 2021q1, supported by customs collections, revenues increased by more than 10 percent, resulting in a deficit of 0.3 percent of GDP. Spending on healthcare and social payments continues to increase by 64 percent and 6.2 percent, respectively. Public and publicly guaranteed debt was up by 8 pp, reaching 35.2 percent of GDP in 2020.

Uncertainties around the evolution of the pandemic and the political environment will keep the economy below potential. GDP is estimated to rebound to 3.8 percent in 2021, assuming favorable conditions including a successful rollout of vaccines. The economy is expected to gain momentum underpinned by the recovery in disposable income in part powered by resilient remittances, the positive fiscal impulse (higher public wages and transfers), and an accommodative monetary stance. Depressed global demand, combined with the recent drought, is expected to contain exports. Robust imports supported by the recovery in domestic demand will be a drag on growth. Most sectors are expected to bounce back, with agriculture leading after a bad yield in 2020.

After a sharp contraction not seen since the 2009 global recession, Moldova faces a slow growth recovery. Economic growth in 2022 is expected to be similar to that of 2021 and is expected to only reach potential in 2023. All sectors will enjoy a rebound as consumer and investment confidence strengthens on the back of more favorable external conditions, dovish monetary stance and expansionary fiscal policy. The current account deficit is expected to deteriorate in 2021 as food exports decrease. Going forward, the current account will gradually widen as economic growth accelerates. Inflation is expected to remain lower than the NBM corridor of 5 percent +/- 1.5 pp in 2021-22 but to pick up as the recovery strengthens. Poverty, as measured by the US$5.50 PPP/day poverty line, is projected to increase 3.6 pp to 14.2 percent in 2020. In 2021, under the assumption of an economic rebound in Moldova and its main migrant destination countries poverty will reach 12.3 percent in 2021.

Fiscal deficits are expected to remain higher than historical levels in the medium term. The fiscal measures introduced to mitigate the impact of the pandemic are expected to keep the fiscal deficit at around 4 percent of GDP in 2021, higher than historical averages, but less than what was planned in the state budget law, partially because of lower external financing and low absorption capacity. Going forward, the fiscal stance is expected to be challenging as businesses struggle and households suffer from weak labor market conditions. As a result, public debt is expected to steadily increase, but remain relatively low by international standards.

The outlook remains subject to substantial downside risks and the fragile recovery relies on the successful rollout of the vaccine. Domestic risks relate to political instability, institutional weaknesses, and political constraints and authorizing environment to implement reforms of the judiciary and structural reforms. Fragile economic conditions and low productivity levels are exacerbated by the large footprint of the state in the economy, shrinking fiscal space, low financial intermediation, and governance challenges. Advancing long-term structural reforms on the background of economic recovery measures and political turmoil, is of paramount importance. The capacity to mitigate the impact of the crisis and support economic recovery will critically depend on external financing, particularly a successful negotiation of the new IMF program. Also, going forward, Moldova will need to address the inequality of opportunities and accelerate private sector-driven job creation. Finally, as shown by the severe drought episode in 2020, the economy is highly vulnerable to extreme weather episodes.

The Special Notes to this Economic Update discusses Moldova’s water security issues and exposure to natural hazard and climate related risks, and the need for strengthening resilience.