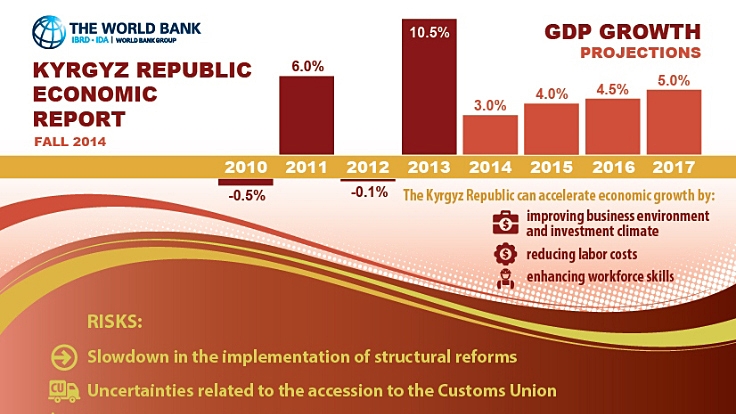 The new government, formed in March 2014, represents the same coalition of political parties and therefore provides continuity on most policies and also a fresh momentum for reforms in key sectors.

Internationally, the Kyrgyz Republic has made firm commitments towards accession to the Customs Union of Belarus, Kazakhstan and Russia, but tensions have appeared in relations with some neighbors.

Political issues are likely to gain prominence with the next round of parliamentary elections scheduled for the autumn of 2015.

Despite robust government investment and gold exports, economic activity has moderated. The slowdown in Russia, the winding down of operations at the Manas Transit Center and increased tensions in trade relations with neighbors are affecting remittances and non-gold exports. Economic activity has been further affected by the poor agriculture harvest. In addition, difficulties expected in ensuring stable energy supply in the winter may add a further drag on activity throughout the rest of the year. As a result, real GDP growth projection has been revised to 3 percent from the 4 percent projected in April 2014.

Inflation spiked in mid-2014, reaching 8.5 percent (year-on-year), which reflects the high-pass through of the depreciation of the som earlier in the year. Pressures on the exchange rate re-surfaced in late August and early September and, despite interventions by the central bank (NBRK), the som depreciated further. Despite slower domestic demand, increases in administered energy prices, further depreciation, and a poor harvest could increase inflation above our projection of around 10 percent for the full year (year-on-year).

The growth slowdown is likely to reduce imports and, together with robust gold exports, should narrow the external imbalance. The current account deficit is now projected to narrow to around 11 percent of GDP this year, down from an earlier projection of 15.5 percent of GDP. Increased borrowing and foreign direct investment (FDI) should finance the deficit and allow for some reserve accumulation.

Hikes in excise tax rates and increased tax enforcement measures helped to off-set the impact on the budget of slower growth this year, with the medium-term plan projecting a significant investment-led fiscal expansion. With the latest Budget supplement, the budget deficit in 2014 is projected to increase to around 5.7 percent of GDP, on account of faster implementation of foreign financed projects. A further increase in the deficit is envisaged in 2015. Keeping fiscal risks manageable may require an adjustment in policies and public expenditure reform.

While growth between 2000 and 2013 was positive for the poor, the link between growth and poverty reduction has weakened in recent years. Robust reduction in poverty in the Kyrgyz Republic has happened mostly in years with growth rates in excess of 5 percent. Such growth has been accompanied by a major contribution from domestic demand and non-commodity exports.

The medium-term growth outlook has become more challenging. The impact of the lower economic growth in Russia would continue to have an adverse impact on domestic consumption and export performance.

Furthermore, the current slowdown in re-exporting activities – which are highly labor-intensive – may continue and result in job losses in the future. Enhanced government spending on infrastructure and investments in energy, transport and mining would help generate positive growth rates, but the economy is currently projected to grow only by 4 to 4.5 percent a year over the next three years.

With such moderate rates of growth, poverty reduction and gains in shared prosperity are likely to be more difficult going forward. Ensuring that growth remains inclusive in the Kyrgyz Republic will require a change in the patterns of growth and an overhaul of the country’s social sectors. 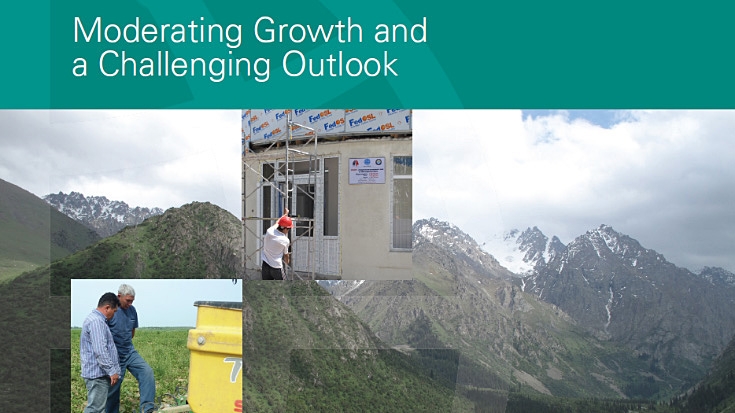