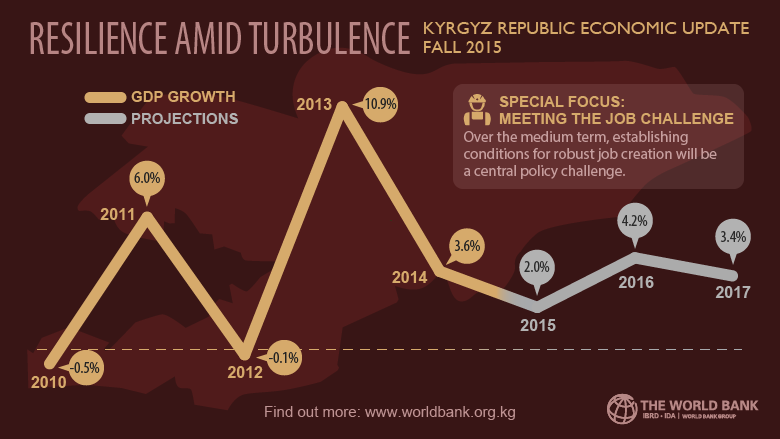 Amidst a turbulent economic environment in Central Asia, the Kyrgyz Republic’s economy has proven relatively resilient during the first eight months of 2015. GDP grew at a rate of 6.8 percent, year-on-year (y/y), between January and August, boosted by frontloaded gold production and a strong performance of the agricultural sector.

Gold output grew by 46 percent (y/y), while the non-gold GDP growth rate reached 4.5 percent, up 0.9 percentage points from the same period in the previous year. However, gold production is projected to decelerate markedly during the remainder of 2015, while increasingly adverse external conditions and exchange-rate developments are expected to depress domestic consumption and private investment, as well as foreign demand.

As a result, the overall growth rate for 2015 is projected to slow to 2 percent. As of August the headline inflation rate had fallen to 5.8 percent (y/y) from 10.5 percent at end-2014, but the combined effect of higher public spending and exchange-rate pressures are expected to drive up prices during the final months of the year, underscoring the importance of maintaining a tight monetary stance.

The government’s monetary and fiscal policies have been broadly adequate to mitigate exchange-rate and demand shocks. Given substantial pressures on the exchange rate in the wake of Kazakhstan’s move to a free float, the authorities’ adopted a prudent strategy in letting the Kyrgyzstani som (KGS) gradually adjust, while preventing sharp swings in its value.

However, this policy also decreased domestic liquidity, and this effect was exacerbated by lower than planned expenditure. Delays in planned investments enabled the government to maintain a budget surplus through the first eight months of 2015.

However, spending is expected to increase sharply in the second part of the year. A rise in public investment coupled with increasing recurrent expenditures—including wage adjustments and a significant expansion in public procurement—are expected to contribute to a deficit of 5.8 percent of GDP (including on-lending) and an increase in public indebtedness.

Looking beyond 2015, the Kyrgyz economy is projected to recover over the medium term, and public finances are expected to stabilize, but this generally positive outlook is subject to significant downside risks.

In the baseline scenario, growth is projected to accelerate to 4.2 percent in 2016, driven by higher gold production and an expected acceleration in regional economic activity. Growth in the non-gold sectors should be relatively robust at around 3.7 percent, but a slower-than-anticipated recovery in Russia and Kazakhstan could threaten this projection. Moreover, slower growth in both the domestic and regional economies could complicate the process of fiscal consolidation.

An uncertain external environment will call for increased vigilance, with particular attention devoted to the efficiency and sustainability of public expenditures. While countercyclical policies will help shore up domestic activity and stabilize employment, the government’s limited fiscal space underscores the importance of effective public spending.

The government has chosen to continue implementing its ambitious public investment program, but the benefits of these investments will take time to materialize and, in the short run high rates of capital spending will widen internal and external imbalances.

Moreover, in 2015, a significant increase in recurrent spending is expected to result in higher deficits, while exchange rate developments have caused the value of Kyrgyzstan’s external debt, as a share of GDP, to increase significantly.

Improved growth prospects in 2016 and beyond should facilitate consolidation going forward, but the authorities will need to remain vigilant. In any scenario it will be key to ensure that fiscal consolidation is achieved by effectively controlling the growth of recurrent spending, but that this does not negatively impact social programs necessary to protect the most vulnerable.

Depreciation pressure on the som is expected to continue over the near term, highlighting the importance of a cautious monetary policy stance underpinned by close attention to inflation and financial sector dynamics.

Over the medium term, establishing the conditions for robust job creation will be a central policy challenge. The deterioration of labor market conditions in Russia and Kazakhstan underscores the vulnerability of remittance inflows and the extent to which migration cannot be depended upon to make up for anemic employment growth in the domestic economy.

The question of how policymakers can support the development a more vibrant labor market in the Kyrgyz Republic is the theme of the Special Focus Section of this Economic Update. 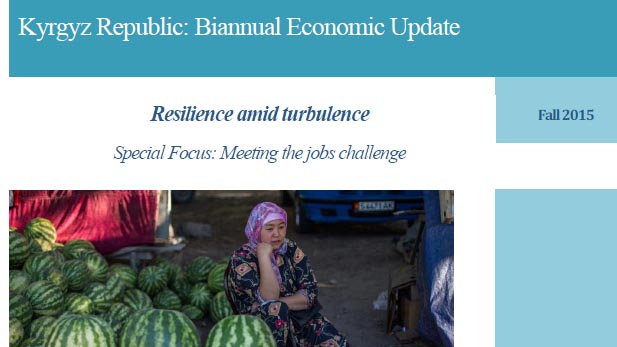