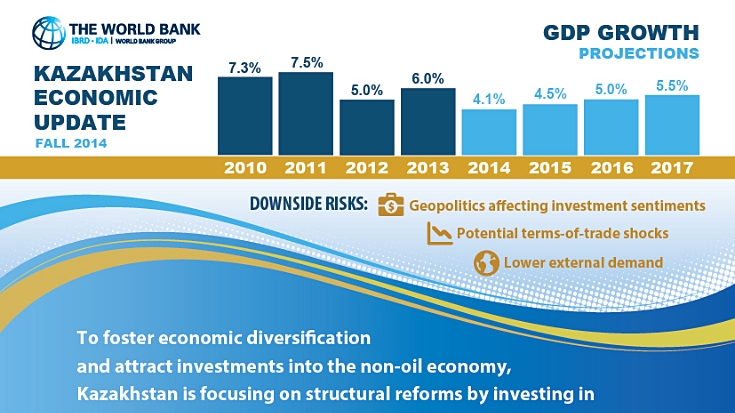 Kazakhstan is experiencing slower economic growth in 2014 due to negative supply- and demand-side effects. Kazakhstan’s real GDP growth slowed from 6 percent in 2013 to 4 percent in the first nine months of 2014. This was caused primarily by lower output in the oil industry, weaker external demand for Kazakhstan’s metal products by China and Russia, and weaker domestic demand. Private consumption, in particular, was hit hard by the negative wealth effect after the tenge devaluation in February 2014, a tightening of lending conditions for consumer loans, and the delayed impact of the slower growth in real wages in 2013.

Immediately after the tenge devaluation, amid early indications of an economic slowdown, the government launched an economic support program for 2014-15 of one trillion tenge, equivalent to $5.5 billion. To fund the program, the government tapped the Oil Fund and also issued $2.5 billion worth of Eurobonds and plans to increase borrowing from international financial institutions.

To restore trust in the tenge and stimulate lending, the monetary authority has worked to stabilize the exchange rate, increase supply of tenge liquidity, and address scarcity of long-term tenge funding and high dollarization in the banking system.

An uncertain global economic environment and regional geopolitical tensions pose risks to Kazakhstan’s economic outlook. The country’s GDP growth is expected to be about 4.1 percent in 2014 before gradually rising to 5.5 percent by 2017, driven mainly by larger oil production. Oil output is projected to increase after off-shore oil production comes on-line in 2016/17.

Risks to Kazakhstan’s short-term outlook may emerge from a further slowdown in metal production and metal processing industries in the country, and from investor sentiment and greater risk-aversion, particularly in response to the Russia-Ukraine crisis. Moreover, as global demand for oil slackens, a further softening of oil prices may also undermine Kazakh consumer and business sentiments and potentially increase pressures on the tenge.

If the economic slowdown starts to have a negative effect on the labor market, the government has instruments in place to mitigate the impact on the most vulnerable people in the population. Current social assistance and employment support programs may need to be scaled up, if additional funding is available from the Oil Fund, or from a reprioritization of budget spending.

To improve the efficiency and effectiveness of support programs, it is recommended that the government better target households in need and ensure time-bound assistance. For the economy to become more resilient, the authorities will need to further develop human capital by improving training and educational outcomes.

The Kazakh government has identified a set of reforms that are expected to help diversify the economy and expand the non-oil sector. The authorities have adopted a new package of measures to attract foreign direct investments to the economy, including investment subsidies, tax incentives, and an improved visa regime and business services to investors.

The government has launched a major program of support for the development of small- and medium-sized enterprises. Efforts are also underway to improve the national regulatory and governance framework that would enhance the transparency and efficiency of economic transactions, facilitate private sector participation, and improve service delivery to the population. Ongoing reforms in customs administration and the courts are part of its reform agenda.

The report also includes special topic sections on dollarization and the non-observed economy in Kazakhstan. 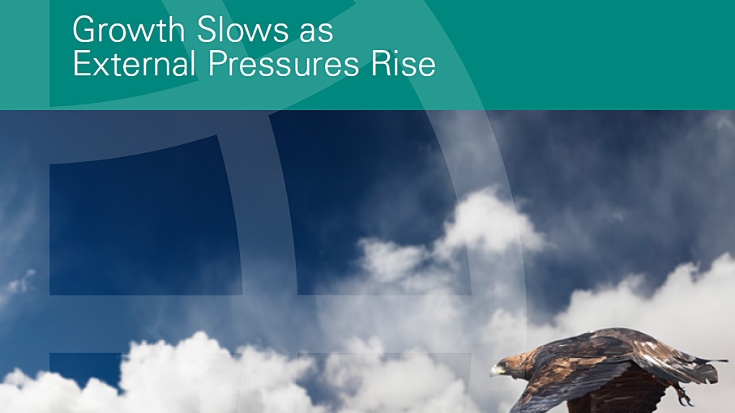