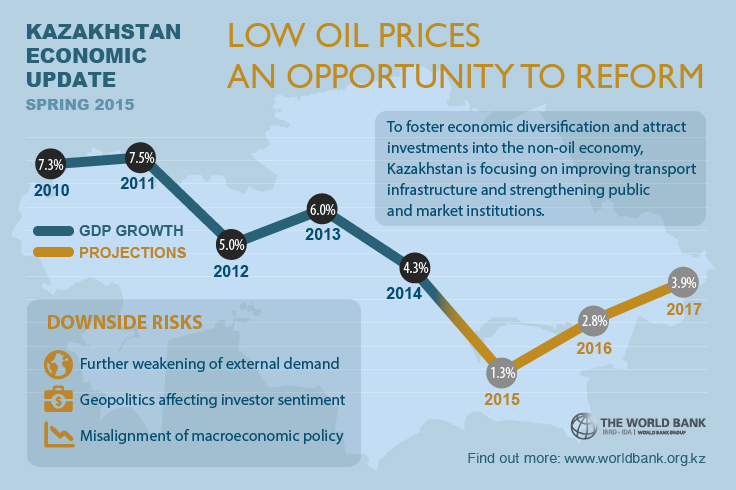 Kazakhstan continues to be politically stable, and the government has plans to strengthen public and market institutions.

In 2014, GDP growth slowed to an estimated 4.3 percent, due to weaker demand and adverse terms of trade developments. Industrial production stagnated and services sector growth slowed.

Sectoral and geographic mobility (from rural to urban areas) has helped keep official unemployment and poverty low, despite the slowdown.

Fiscal stimulus, balanced by budget cuts, is too modest to counteract the impact of the downturn on growth.

The launch of two economic support programs in 2014 was intended to encourage growth by dismantling major barriers to access to finance and infrastructure for the private sector.

The fiscal adjustment has allowed the government to keep the non-oil deficit flat and debt low.

Since the February 2014 devaluation, monetary policy has attempted to both alleviate the pressure on the tenge and address the scarcity of long-term tenge funding. However, in the second half of 2014, the fall in oil prices affected the external balance and put further pressure on the tenge.

In response, the monetary authorities curbed tenge liquidity in Q4 2014 to defend the tenge-dollar peg, affecting the funding cost and credit growth to the economy.

After the February devaluation, prices rose steadily, despite short-term controls on the prices of basic foods, public transport, and utilities. In early 2015, lower energy prices brought inflation down.

The authorities are moving ahead with their ambitious agenda of regulatory and institutional reforms to diversify the economy and increase private sector participation.

The structural reform agenda includes an ambitious plan for 2014–16: privatization of some state-owned enterprises; reforms to address the lingering issue of non-performing loans that has held back recovery of the banking sector since the 2007–08 crisis; and work to improve regulatory governance and the business environment by streamlining the extensive portfolio of laws that affect the private sector.

Fiscal policy is expected to normalize in 2016–17, and total government debt is expected to remain sustainable, as there are ample reserves in the Oil Fund to cover it. Monetary policy may need to adjust in response to external pressures.

In Focus: Employment and Shared Prosperity

Kazakhstan has made remarkable progress in creating jobs, reducing poverty, and sharing prosperity based on job creation and higher wages. Job creation has also led to upward social mobility and the rise of the middle class.

Kazakhstan created about 1.5 million jobs between 2003 and 2013, with gains in services (especially trade and education) and construction compensating for losses in agriculture. As a result of the rapid growth in jobs, unemployment was halved – from 10.4 to 5.2 percent – between 2001 and 2013. Jobs are increasingly leaving agriculture for urban services.

Wage employment and real wages have grown together, having a significant impact on poverty. In fact, upward mobility has increased and contributed to the rise of the middle class.

Employment growth has been higher for occupations that require medium to high skills, but a large number of the employed still work in low-productivity sectors.

Looking ahead, a key question is how to ensure continued shared prosperity. It will be important to continue creating private sector jobs, with a focus on quality and productivity, and to build skills so that workers can move to higher-paying occupations. Also, it will be important to bridge the geographic poverty divide along regional and rural/urban lines. 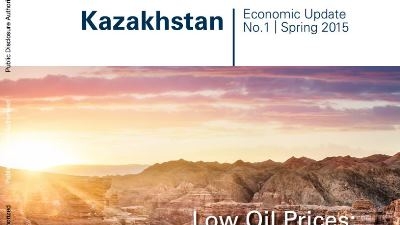