Kazakhstan: A Long Road to Recovery 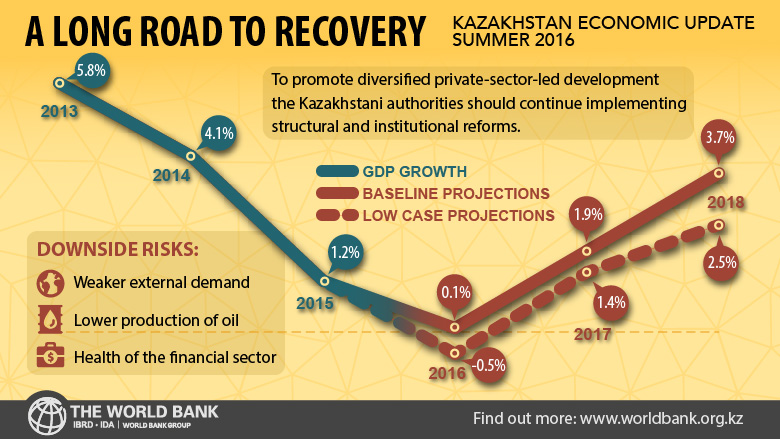 A challenging external environment has caused a broad-based economic slowdown in Kazakhstan, along with an adjustment in income and domestic prices. GDP growth slowed from 4.1 percent in 2014 to 1.2 percent in 2015, and the economy contracted by an estimated 0.2 percent during the first five months of 2016.

The move to a floating exchange-rate regime in August 2015 led to a steep depreciation of the Kazakhstani tenge (KZT) and a steep increase in the inflation rate, which rose from 3.8 percent, year-on-year, in August 2015 to 16.7 percent in May 2016, eroding real wages and consumer purchasing power.

Low-income households are particularly vulnerable to increasing prices, declining real wages and dampened employment opportunities. Progress in poverty reduction has stalled, and the national poverty headcount rate (measured at US$5 per day in purchasing-power parity terms) remained at an estimated 14 percent during 2014-15.

In 2015, the Kazakhstan government’s macroeconomic policy stance was mixed, but in 2016 it became more consistent with lower medium term oil prices. The authorities adopted a proactive fiscal policy stance in 2015, while a fiscal consolidation is planned for 2016.

The government modified on-budget spending in March 2015 to reflect the expectation of lower oil prices over a longer period of time. The authorities also balanced earlier countercyclical spending commitments under the Nurly Zhol infrastructure development program, with reductions or delays in other non-priority capital expenditures.

Monetary and exchange-rate policies were slow to adjust in 2015, with the central bank announcing a shift to a floating exchange rate and an inflation-targeting regime in mid-August 2015. The transition was difficult, as the newly introduced base rate was initially ineffective and was suspended in November 2015, leading to large money-market rate fluctuations that continued into early 2016.

The 2016 monetary policies indicate progress toward the full adoption of the new monetary regime. The reintroduction of the policy rate in early February 2016 stabilized the money market, while exchange rates also steadied and began to appreciate as oil prices rose. The authorities are moving ahead with further measures to enhance the effectiveness of the new monetary policy framework.

The authorities plan to continue implementing structural reforms designed to promote diversified development. The government has reiterated the importance of institutional and structural reforms to diversify the economy and reduce its dependence on oil exports.

In May 2015, the government launched a large-scale institutional reform program – “One Hundred Concrete Steps, a Modern State for All” – which encompasses reforms in public administration, the regulatory framework, public financial management and accountability, the management of state-owned enterprises, and various sector-specific reforms. The aim is to strengthen governance and reduce the role of the state in the economy. The legislation underpinning these reforms was passed in December 2015, and a privatization program has also been introduced.

Accelerating the implementation of planned macroeconomic, institutional and structural reforms would have a substantial impact on the drivers of medium-term growth. In turn, higher (and higher quality) growth of the non-oil economy will help create productive and high quality jobs for the large cohort entering the labor market starting in 2020.

Growth is projected to recover gradually over the medium term, but the economy will continue to face substantial headwinds.

The baseline scenario rests on the assumption that oil prices will average around US$ 41 per barrel in 2016, then rise to US$ 50 in 2017 and reach US$ 53.3 in 2018. Under the baseline scenario, GDP growth is expected to remain near zero in 2016, before rising to 1.9 percent in 2017 and 3.7 percent in 2018, as production commences at the Kashagan oilfield, global oil prices rebound, renewed consumer and investor confidence supports the recovery of the non-oil sectors, and inflation eases to an average of 6-8 percent per year. Meanwhile, both fiscal and external conditions are expected to improve.

However, this medium-term outlook is subject to significant downside risks, including risks to the health of the financial sector, sluggish global growth, and the potential for a deeper or more protracted recession in Russia, a further slowdown in China, continued instability in global oil markets, or production delays at the Kashagan oilfield. 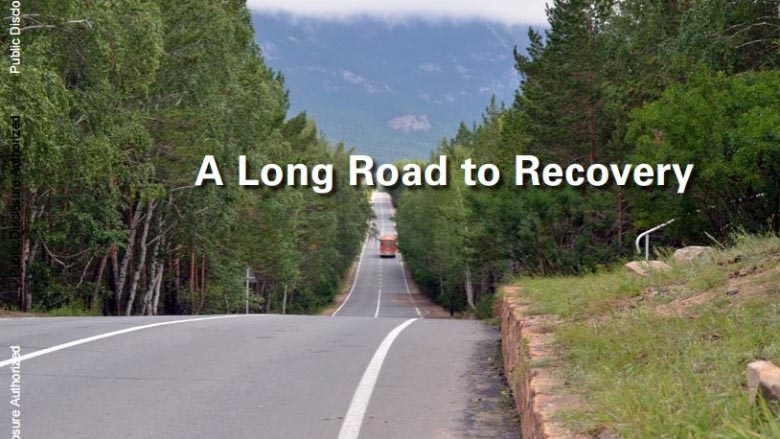