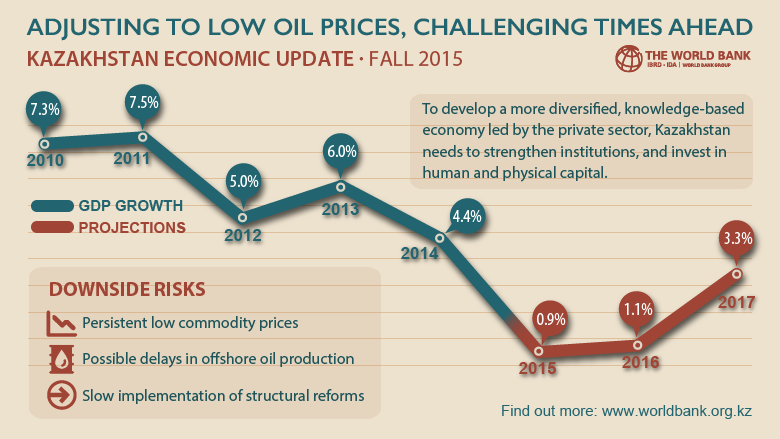 Kazakhstan’s economy faces the challenge of adjusting to a large terms-of-trade shock in a context of declining domestic and external demand. After a substantial drop during the second half of 2014, oil prices remained low in 2015, averaging about $53 per barrel during January-October 2015, with negative implications for both domestic consumption and investor confidence.

Kazakhstan’s GDP growth slowed from 4.1 percent (year-on-year) during the first nine months of 2014 to an estimated 1 percent during the same period in 2015.

Oil prices dropped by more than 50 percent between June 2014 and October 2015, cutting export revenues by almost a half and creating a twin deficit in the fiscal and current-account balances in 2015.

Inflation decreased from 7.5 percent (year-on-year) in the beginning of 2015 to a historical low of 3.8 percent in August, due to weaker domestic demand and lower fuel prices. However, inflation appears to be rising once again in the wake of the recent exchange-rate adjustment.

The authorities responded to the collapse of global oil prices through a rapid fiscal adjustment, followed by corresponding monetary and exchange-rate policy adjustments.

In March 2015, the Kazakh government balanced out earlier allocated spending for the infrastructure development program, Nurly Zhol, with reductions or delays in other non-priority capital expenditures, allowing it to keep the state budget deficit (or a debt accumulation) within 3 percent of GDP in 2015.

Meanwhile, the central bank tightened its monetary policy stance in support of the pegged exchange-rate regime to ensure price and exchange rate stability. Tighter monetary policy reduced credit to the economy despite the government’s provision of subsidized loans to specific sectors.

The defense of the pegged exchange rate regime affected official international reserves. It also contributed to the real appreciation of the tenge and dollarization of deposits in the banking system.

In August 2015, the authorities decided to move to a floating exchange rate and shift the country’s monetary policy to an inflation-targeting regime. The tenge lost a third of its value against the US dollar by the end of October 2015.

These policy measures and the adjustment of the relative prices were necessary to safeguard fiscal and external accounts sustainability in the medium term and help adjust national income in a context of lower oil prices.

A difficult external environment will continue to affect Kazakhstan’s medium-term outlook. Over the longer term, however, diversification of the economy will increase the country’s resilience to external shocks.

Under our baseline scenario, oil prices are expected to remain low through 2016, before gradually recovering in 2017 – supporting increased consumption and stronger investor confidence over the medium term. GDP growth will be low at about 1 percent in 2015 and 2016, but may increase to 3.3 percent in 2017.

The lower-case scenario assumes that in 2016 oil prices will fall further than in the baseline, worsening Kazakhstan’s fiscal and external positions and further depressing domestic demand and GDP growth.

Under both scenarios, domestic oil production is expected to begin increasing in 2017, if the Kashagan offshore oilfield comes on-stream, boosting GDP growth and improving the fiscal and current account balances.

Nevertheless, the economy continues to face significant downside risks, including the possibility of delays in Kashagan oil production, or a protracted recession in Russia and a further slowdown in China.

Going forward, successful implementation of the government’s ambitious structural reform agenda, including full implementation of World Trade Organization agreements, along with institutional reforms and capacity building, human capital formation and continued investment in infrastructure should boost productivity and competitiveness in the non-oil economy. Over time, this is expected to lay the foundation for a more sustainable and diversified development path in Kazakhstan. 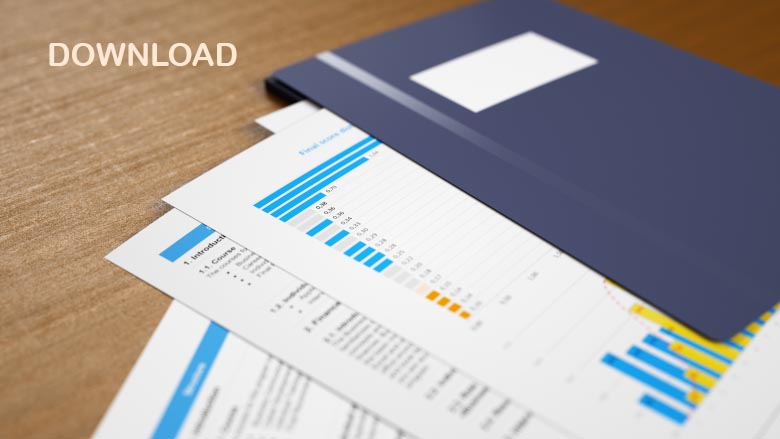