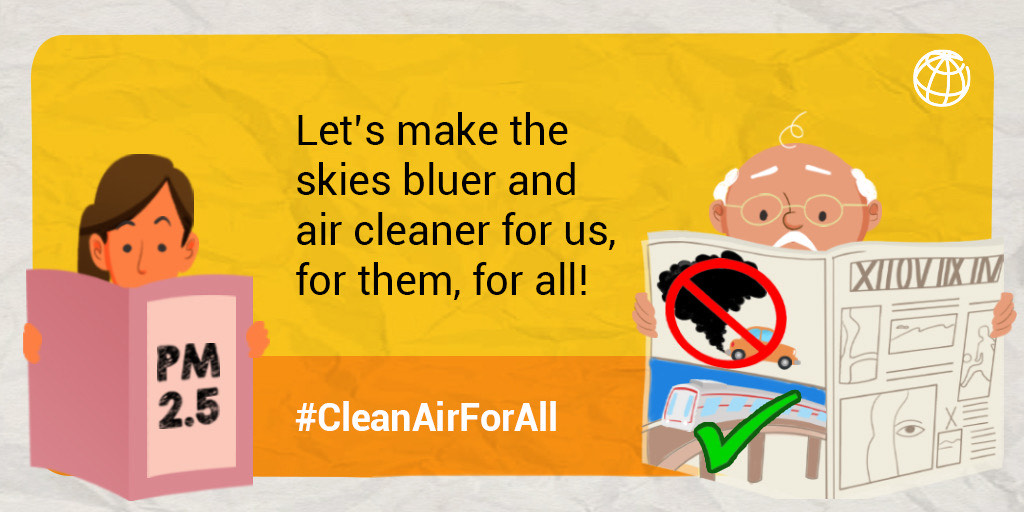 Beyond Boundaries - Understanding Airsheds and PM2.5

A 5 minute animation film that introduces the concept of airshed management of air pollution in India and helps understand how PM2.5 is formed, how it travels and how it impacts health.

Globally, air pollution is a silent killer. The air pollution levels in India are among the highest in the world, posing a heavy threat to the country's health and economy. All of India’s 1.4 billion people are exposed to unhealthy levels of ambient PM 2.5 – the most harmful pollutant - emanating from multiple sources. These small particulates with a diameter of less than 2.5 microns, is about one-thirtieth the width of a human hair. Exposure to PM 2.5 can cause such deadly illnesses as lung cancer, stroke, and heart disease. Ambient and indoor air pollution is estimated to have caused 1.7 million premature deaths in India in 2019. The health impacts of pollution also represent a heavy cost to the economy. Lost labor income due to fatal illness from PM 2.5 pollution in 2017 was in the range of $30-78 billion, equal in magnitude to about 0.3-0.9 percent of the country’s GDP.

PM 2.5 comes from a variety of sources. Some of the most common sources include emissions from burning fossil fuels such as coal or oil and biomass such as wood, charcoal, or crop residues. PM 2.5 can also come from windblown dust, including natural dust as well as dust from construction sites, roads, and industrial plants.

Over half of PM 2.5 emissions in India are formed in “secondary” way in the upper atmosphere when different types of gaseous pollutants from one area such as ammonia (NH3), mix with other gaseous pollutants like sulfur dioxide (SO2), and nitrogen oxides (NOx) from another place. Agriculture, industry, power plants, households, and transport all contribute significantly to the formation of secondary PM 2.5. This secondary form spreads farther and wider than primary PM2.5 and travels across states, cities, and crosses jurisdictional borders.

The air pollution challenge in India is therefore inherently multi-sectoral and multi-jurisdictional. The common geographic area where pollutants mix and create similar air quality for everyone is called an airshed. Cities need to look beyond their immediate jurisdiction for effective air pollution control strategies and apply a new set of tools for airshed-based management. Also, standardizing tools across India is important so control strategies and relevant data sets can be linked. 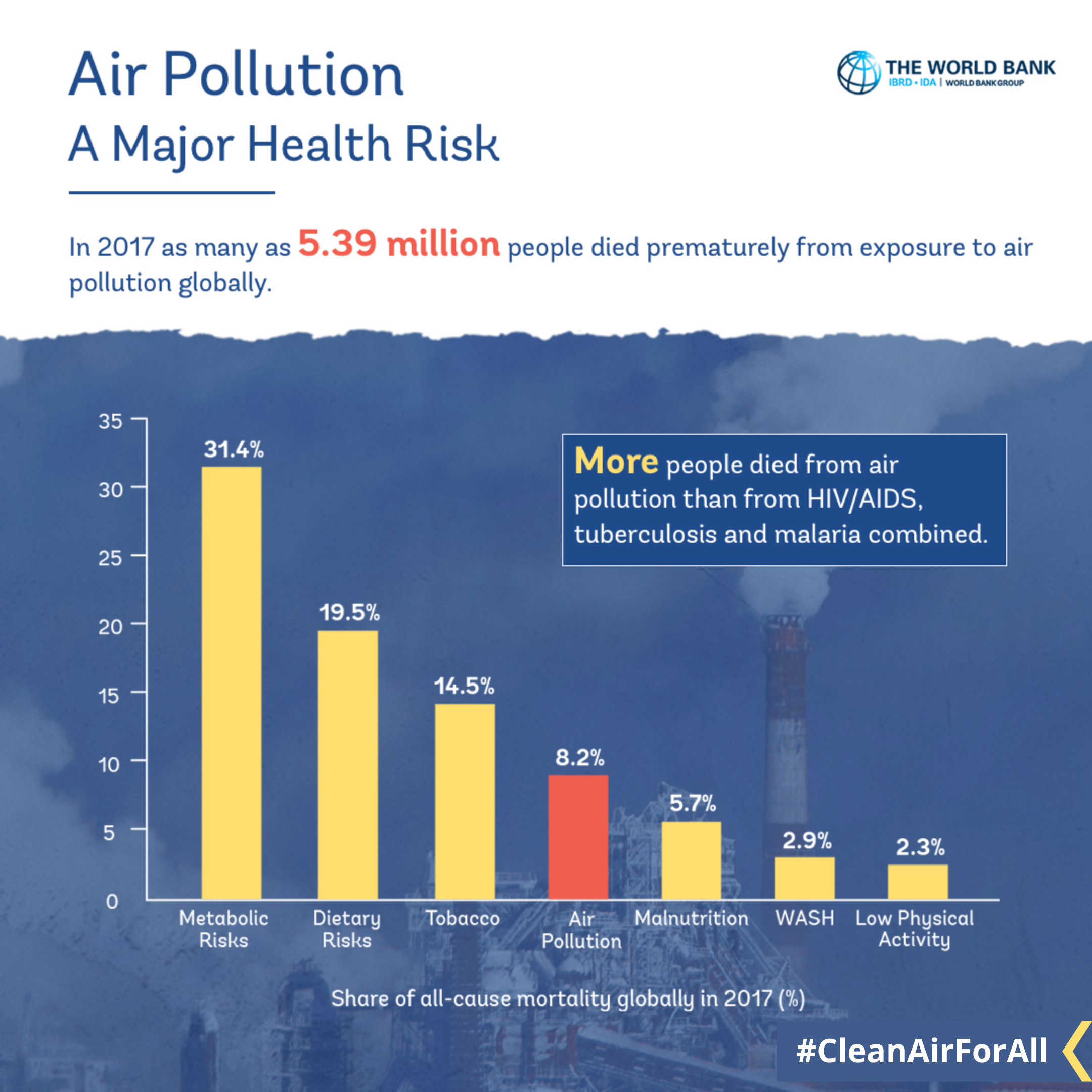 India is taking many significant steps in responding to this problem. The Government of India is envisaging a revision of its the ambient air quality standards and has strengthened vehicular and industrial emission standards in recent years. A strong emphasis on expanding renewable energy, promoting electric vehicles, and supplying LPG cooking fuel to millions of households are some examples of the actions India is taking to combat air pollution.

The Government of India’s National Clean Air Programme (NCAP) is a powerful step in acknowledging and resolving the problem of deteriorating ambient air quality. The NCAP has set a time-bound goal for improving air quality across the country, with a focus on around 132 “non-attainment” cities where air pollution standards are not being met. The NCAP provides cities an overall framework for developing air quality management plans, with guidance on policies across a range of sectors.

In 2020, based on the recommendations of the 15th Finance Commission, the Government of India has set aside about $1.7 billion to fight air pollution over the next five years for the 42 Indian cities that have million-plus populations – provided they reduce their air pollution levels by 15 percent every year. This is the world’s first performance-based fiscal transfer funding program for air quality management in cities.

Recognizing the need for concerted cross-jurisdiction and airshed level action and coordination, India’s Parliament approved a law in August 2021 to establish the Commission of Air Quality Management in the National Capital Region and adjoining areas. 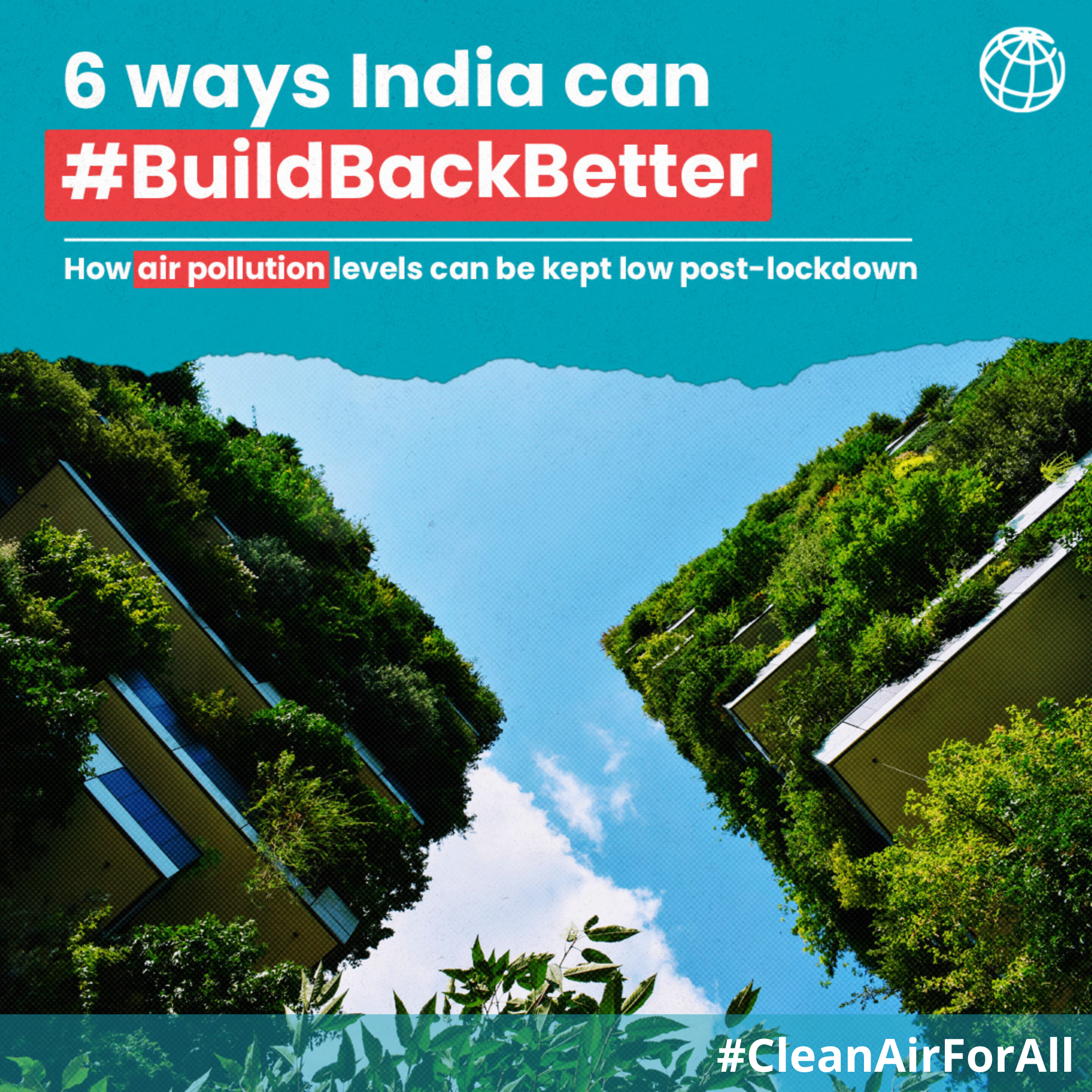 How air pollution levels can be kept low post-lockdown? 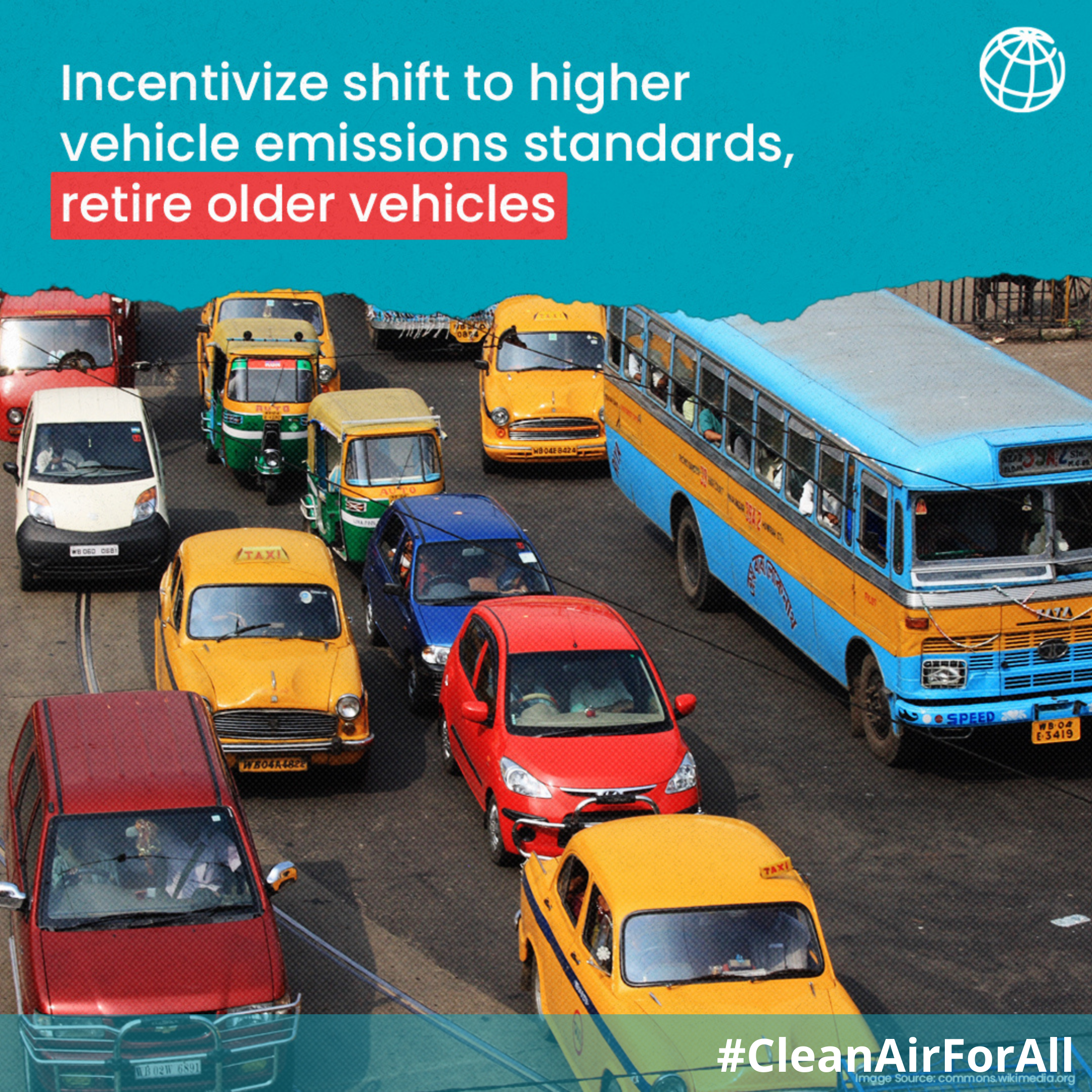 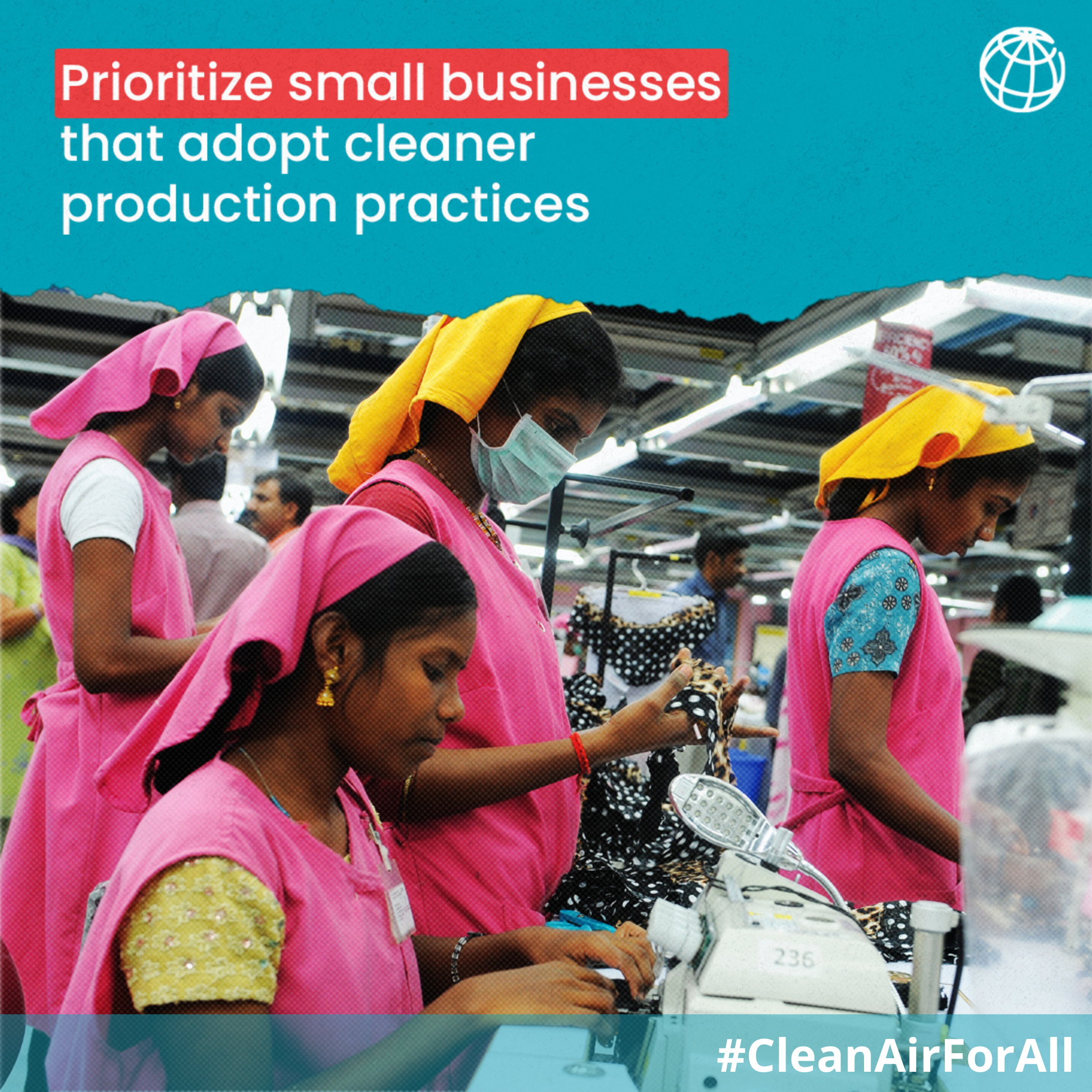 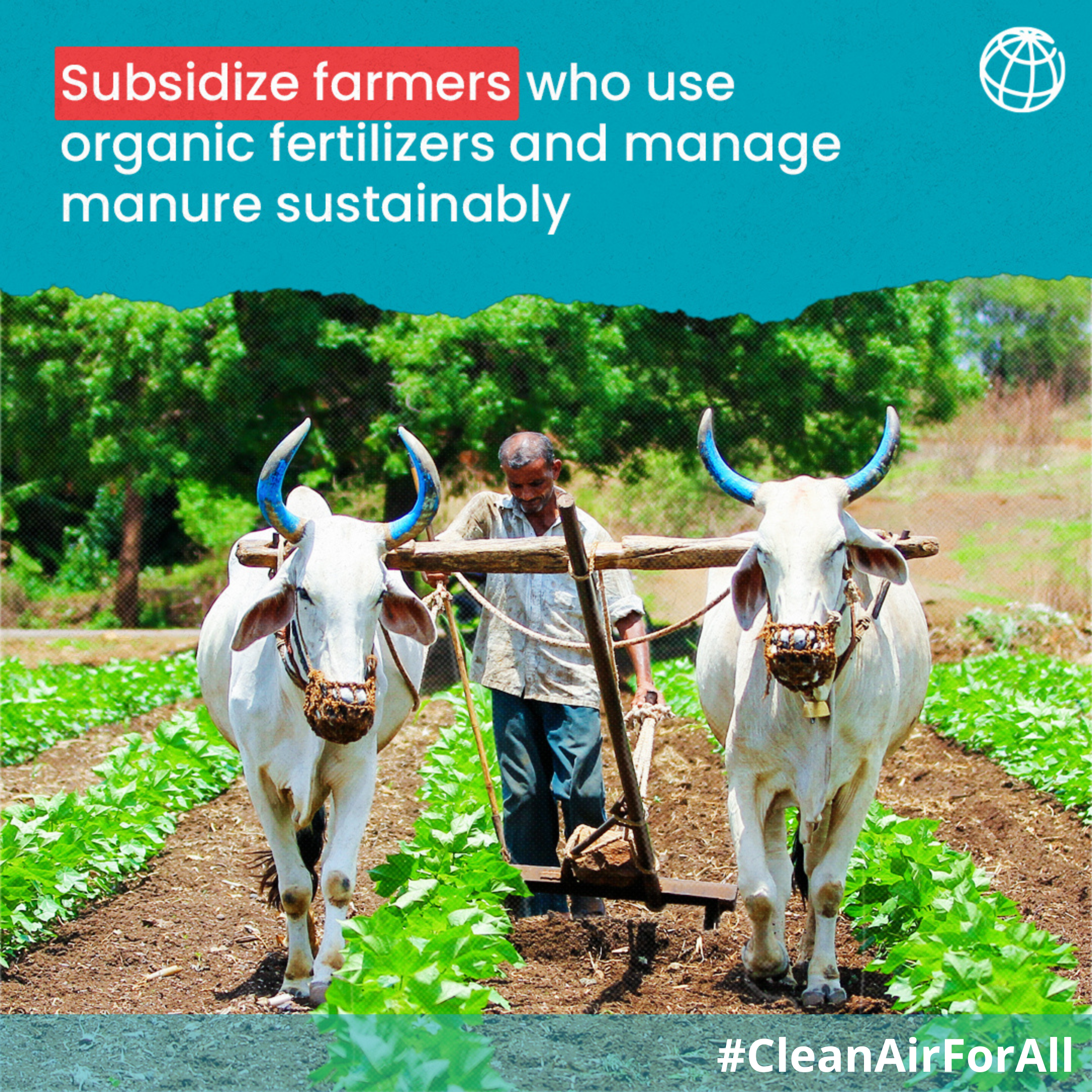 Subsidize farmers who use organic fertilizers and manage sustainably 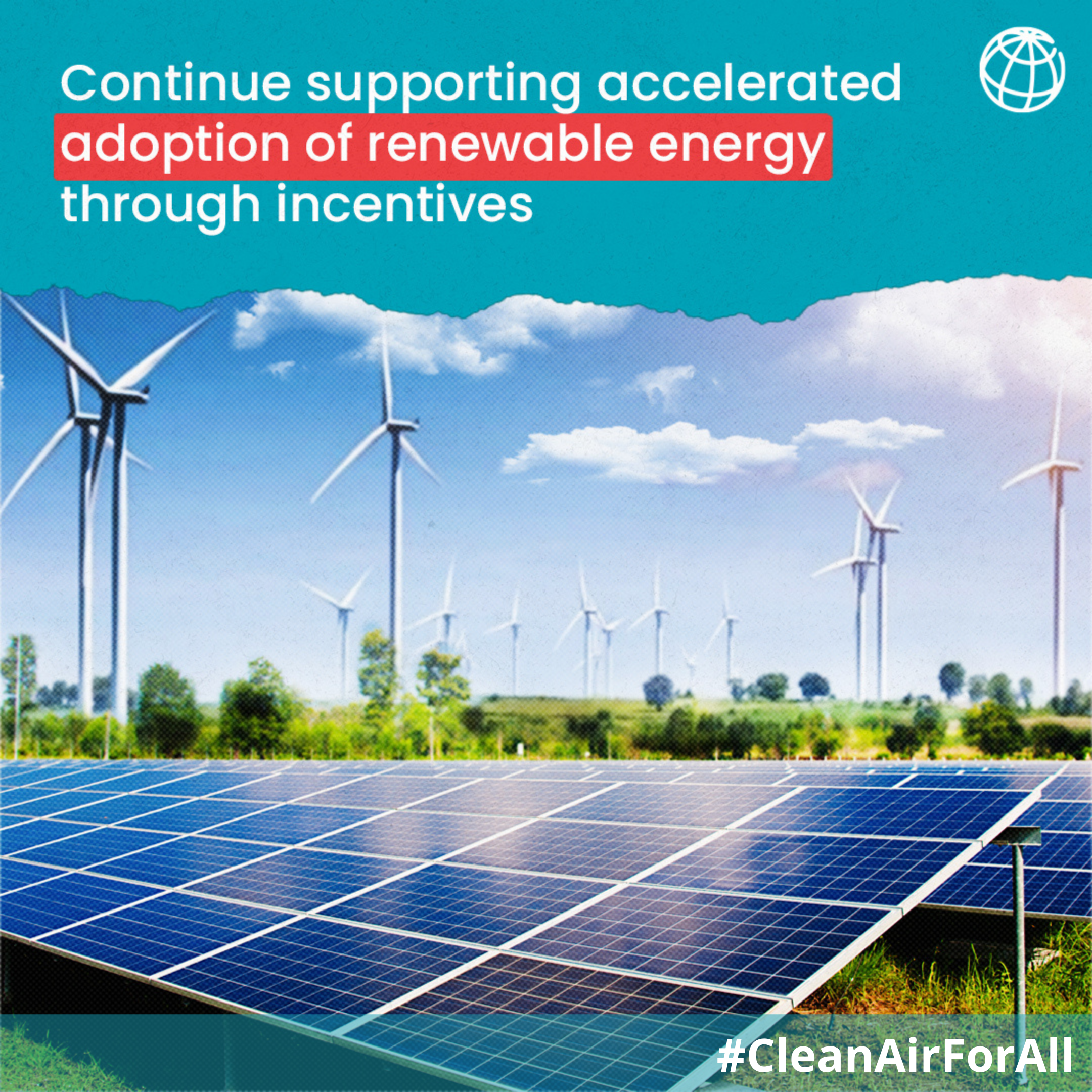 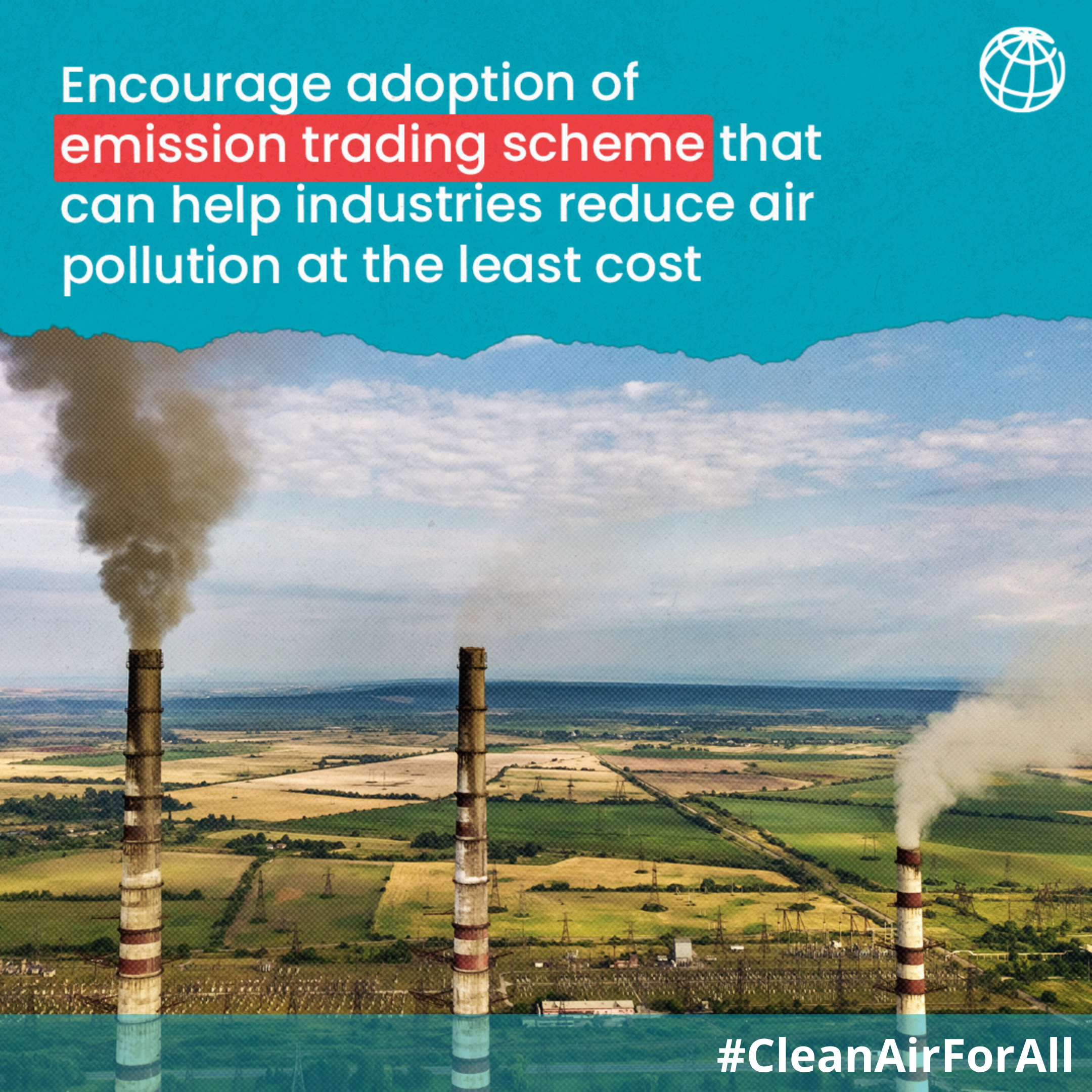 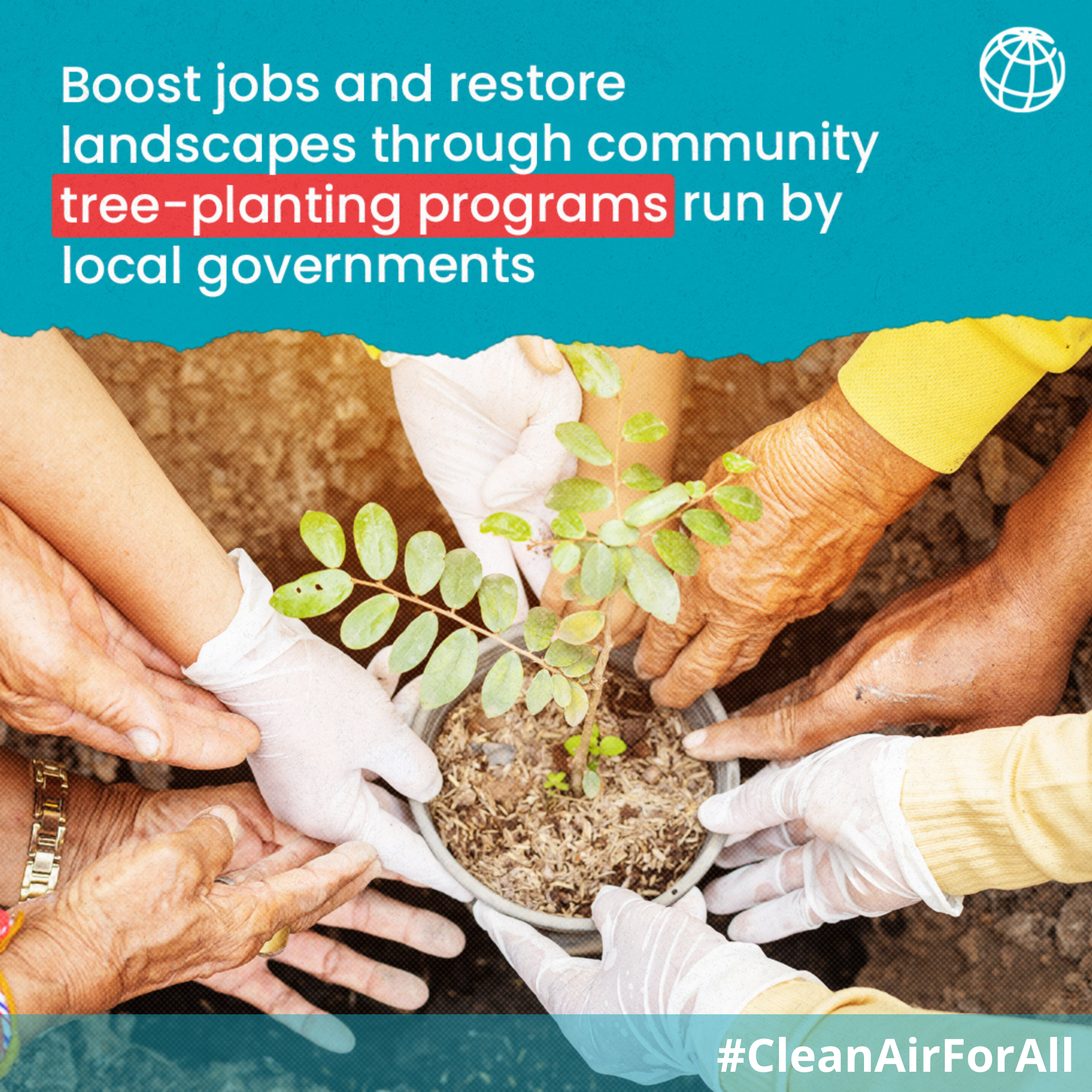 "The big challenge is how do we build back greener and build back better in a new environment as we come out of the recovery. People need to make the right investments now."
David Malpass
President, World Bank Group

The World Bank is supporting India in tackling air pollution under its Country Partnership Framework. The greatest effort is being placed on the Indo-Gangetic Plain where the population density and pollution intensity are the highest and most concerning, and capacity and systems to tackle the challenge are in most need of support.

Building on the work that is already underway, the World Bank program introducing tools to support state and regional air quality management approaches. These initiatives will help formulate India’s first State Air Quality Action Plans and India’s first large Airshed Action Plan for the Indo Gangetic Plains (IGP), spanning seven union territories and states. Measures such as these will be prioritized to reduce the greatest amount of air pollution at the lowest cost based on scientific evidence.

The World Bank is also supporting the National Knowledge Network (NKN) in establishing a training program to enhance the capacity and skills of citizens to take on new jobs in air pollution management. The training is aligned with India's National Skills Qualification Framework (NSQF).

In the IGP states, the World Bank program supports the Network in connecting with academic institutions and city and state practitioners to carry out air quality management work such as modeling.

As part of the India Lighthouse initiative, experts from India and around the world have been exchanging their experiences to develop India-specific practices using state-of-the-art tools to make the full extent of the air pollution problem in India more effectively understood, managed, and controlled.

Air quality management is an ongoing process. It needs to be integrated into the capabilities of the government, as well as incorporated into the behavior of businesses and individuals. This requires sufficient funding and a sustained focus on building capacity.

The good news is that many other countries have demonstrated that air pollution control is possible when there is strong commitment and a well targeted and cost-effective plan in place.

Due to its convergence with climate change, India has already put in motion many of the essential “sector transitions” needed in air quality management. For example, India is spearheading a solar-energy revolution. Today, 60 percent of Delhi Metro’s daytime energy requirement is being met through solar power from the 750 MW Rewa Solar Project in Madhya Pradesh, reducing its dependence on coal, as well as saving over $170 million on its energy bill over the next 25 years.

What’s more, a study by the World Bank and the International Institute for Applied Systems Analysis (IIASA) show that focusing on air pollution through a clean air pathway out to 2030 could bring about significant climate change co-benefits for India. Such a pathway, for example, will reduce India’s CO2 emissions by 23 percent by 2030, and 42 percent by 2040-50. In fact, most of the policy measures and management practices are well-known. If pursued, they have the potential to reduce India’s air pollution within a single generation.

During the medium- to long-term, the World Bank will support Indian cities and states, as well as the Indo-Gangetic Plain in implementing state and regional airshed plans for cleaner air for all. The focus will be on developing institutional capabilities and implementing systems that are vital for change. Working with the government and various stakeholders will help to bring the best local and international experts to bear on the air quality issue. 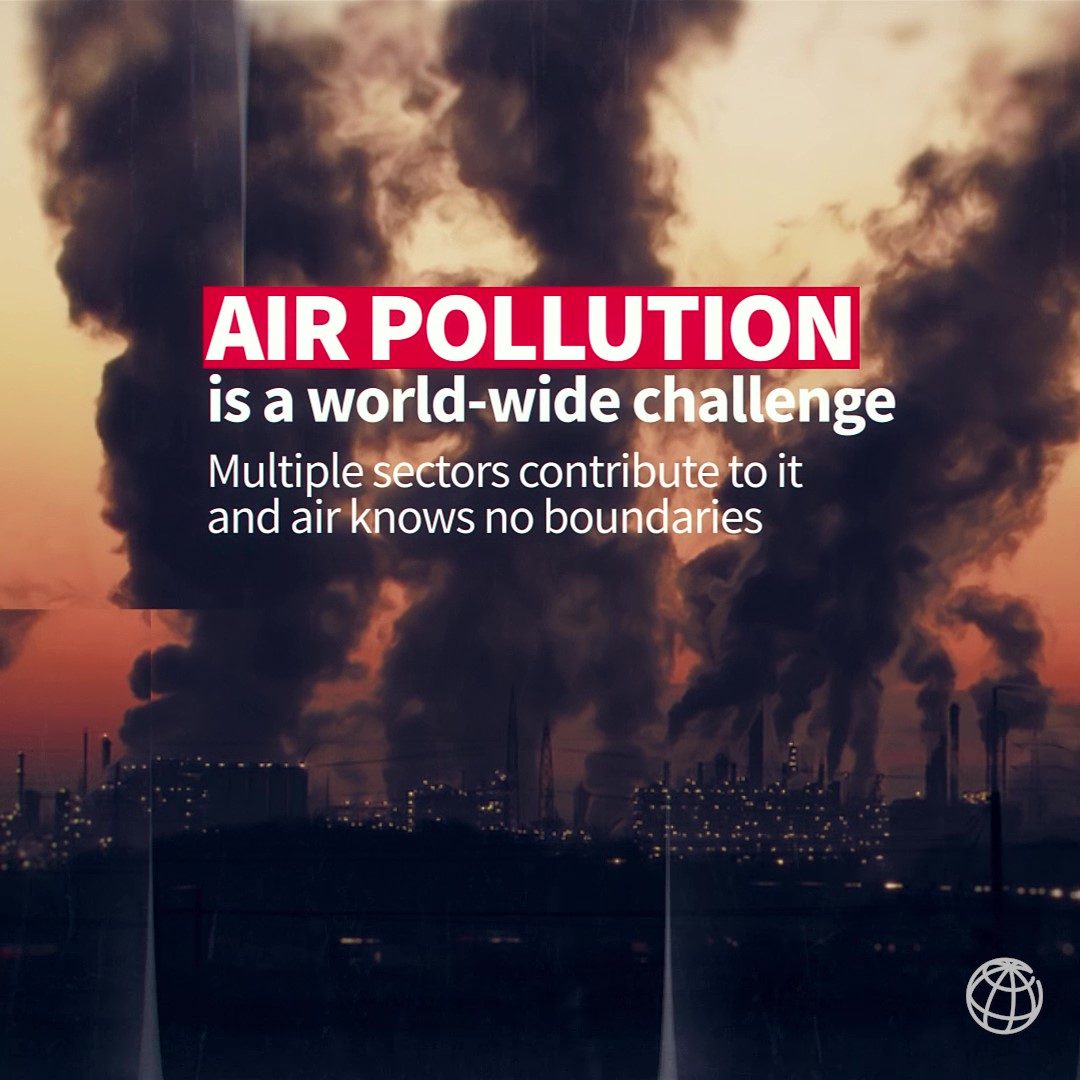 What lessons can be drawn from Mexico City, Beijing and New Delhi that are tackling air pollution through Information, Incentives and Institutions

Air pollution is a world-wide challenge. Multiple sectors contribute to it and air knows no boundaries but sustained political commitment can make a difference. 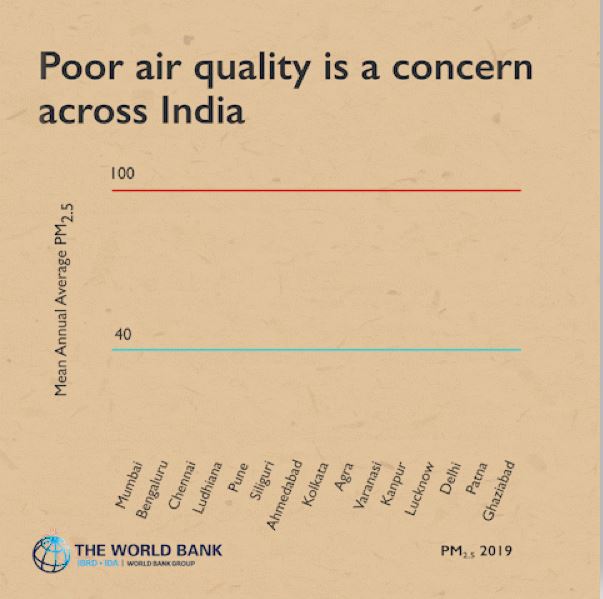 Poor air quality is a concern across India