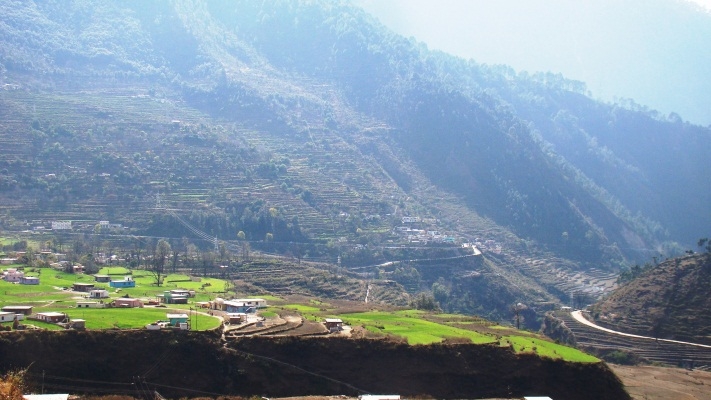 Villagers from Haat village have built themselves new and more modern homes across the river.

The Inspection Panel, the World Bank’s independent accountability mechanism, has found that the Bank was in broad compliance with its own policies while preparing the Vishnugad Pipalkoti Hydro Electric Project (VPHEP) in Chamoli district of Uttarakhand and that it had, in fact, introduced some best practices in the project. The Inspection Panel was examining charges made by some individuals living in the vicinity of VPHEP that the World Bank did not follow its internal policies and procedures while assessing the possible impacts of the 444 MW hydropower project.

The report of the Inspection Panel, which was discussed by the World Bank’s Board of Executive Directors on 30 September 2014, also highlights various initiatives taken by the Government of India to assess the cumulative impacts of its hydropower development program in the upper reaches of the Ganga River.  The report also recognizes as good practice the Government’s decision to raise the environmental flow requirement (the mandatory amount of water to be kept in the river by a hydropower project) for VPHEP to 15.65 cumecs.  It also suggests the need for closer coordination of projects across the Alaknanda Basin, where the VPHEP is located, possibly through a river basin management approach.

The Inspection Panel investigation confirms that the Bank is broadly in compliance with its policies and procedures on VPHEP, and identifies two areas (details below) where additional measures will be required to achieve full compliance.  World Bank management has committed to providing monitoring and supervision to help address the areas of concerns raised by the Panel as well as any other issues that may arise during project implementation so as to enhance the sustainability and viability of the Project.

The Inspection Panel is an independent accountability mechanism of the World Bank that can be approached by individuals or communities if they believe that they have been, or are likely to be, adversely affected by a World Bank-financed project as a result of the Bank’s noncompliance with its internal policies and procedures.

VPHEP is a run-of-river hydropower generation scheme on the Alaknanda River in Uttarakhand that will on completion generate an estimated 1,665 million kilowatt-hours of electricity each year to help relieve India’s chronic power shortage.  The 444 MegaWatt Project will also help reduce India’s greenhouse gas emissions by 1.6 million tons each year, compared to a thermal plant of the same capacity.

VPHEP is being developed by THDC India Ltd and financed by a US$ 648 million loan from the World Bank.  The Bank’s Board of Executive Directors approved the Project for financing in June 2011 and the loan became effective in November 2011.

Findings of the Inspection Panel

Other Issues for World Bank Attention: