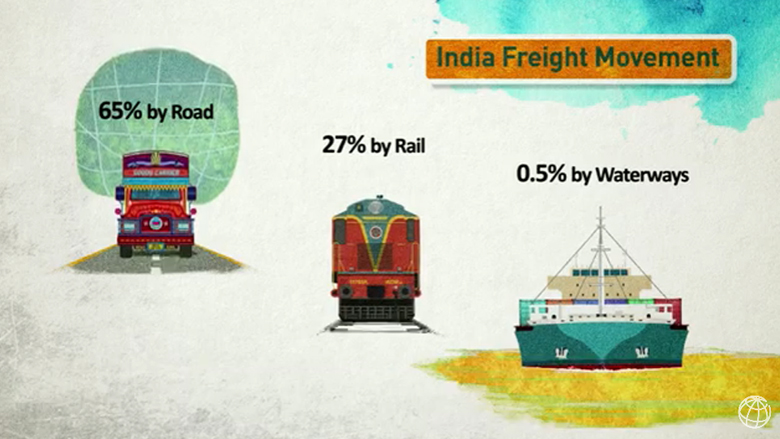 Through the ages, rivers have served as effective waterways, carrying people and goods over long distances.  Even today, many countries depend heavily on inland water transport, especially for large and bulky cargo, as it is cheaper, more reliable and less polluting than transporting goods by road or rail.

India has yet to develop this cheaper and greener mode of transportation. Goods still travel by congested road and rail networks, slowing the movement of cargo, adding to uncertainties, and increasing the costs of trade. So much so that logistics costs in India are estimated to account for as much as 18 percent of the country’s GDP.

Until about a hundred years ago, the Ganga river, too, was a busy waterway. But with the coming of the railways, this watercourse fell into disuse. The Government of India is now reviving the Ganga watercourse – known as National Waterway 1 or NW1- to ferry cargo from the eastern seaport of Haldia to Varanasi, some 1,360 km inland.  The waterway has the potential to emerge as the leading logistics artery for northern India. 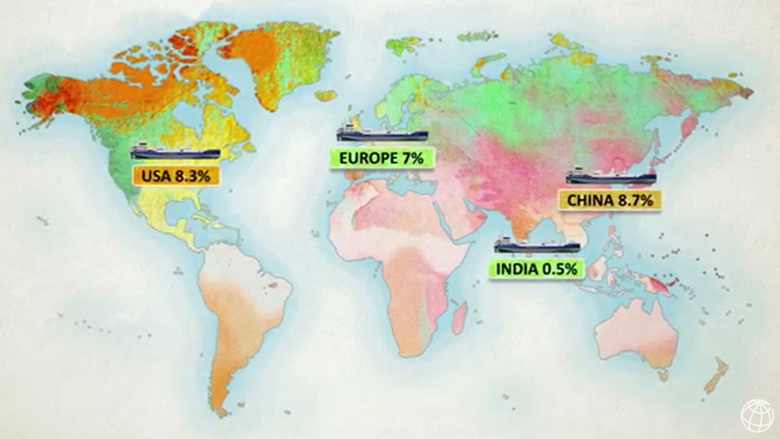 The waterway’s stretch between Kolkata and Delhi passes through one of India’s most densely populated areas.  A sizeable forty percent of all India’s traded goods either originate from this resource-rich region or are destined for its teeming markets.  While the region is estimated to generate about 370 million tonnes of freight annually, only a tiny fraction of this - about 5 million tonnes - currently travels by water.

Currently, cargo from the Gangetic states of Bihar and Uttar Pradesh takes circuitous land routes to reach the sea ports of Mumbai in Maharashtra and Kandla in Gujarat, rather than going to the much-closer port at Kolkata.  The development of NW1 will help these states direct some of their freight to the Kolkata-Haldia complex, making the movement of freight more reliable and reducing logistics costs significantly.

The World Bank is financing the development of the Ganga waterway with a loan of $ 375 million.  The Capacity Augmentation of National Waterway 1 Project will help put in place the infrastructure and services needed to ensure that NW1 emerges as an efficient transport artery in this important economic region.

Once operational, the waterway will form part of the larger multi-modal transport network being planned along the river.  It will link up with the Eastern Dedicated Rail Freight Corridor, as well as with the area’s existing network of highways.  This web of water, road and rail arteries will help the region’s industries and manufacturing units switch seamlessly between different modes of transport as they send their goods to markets in India and abroad. Farmers in the agriculturally-rich Gangetic plain will also benefit, as the waterway opens up markets further afield. 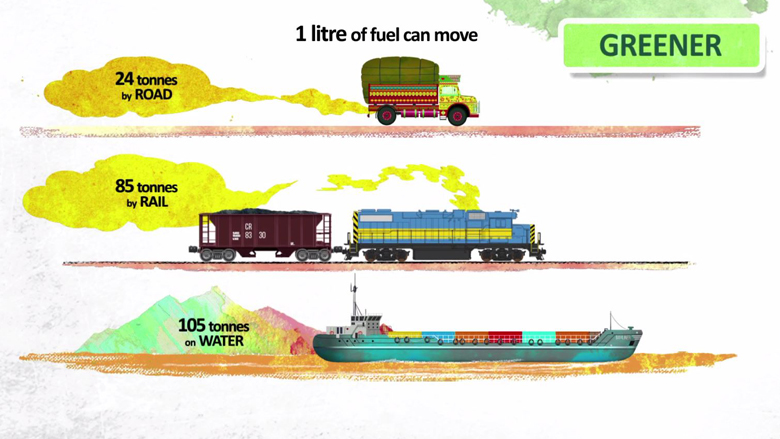 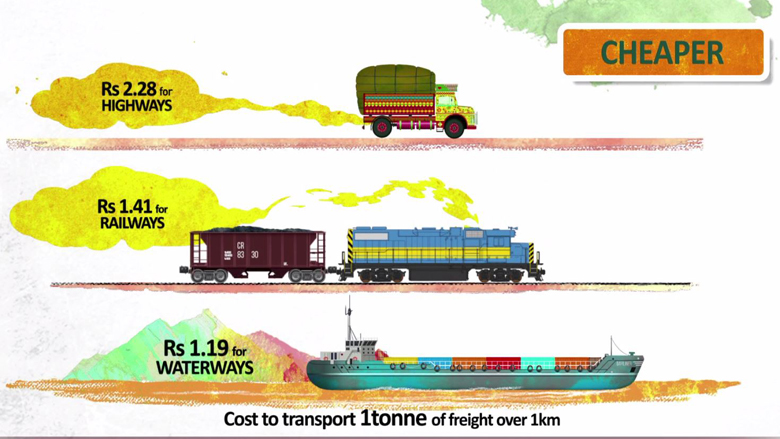 Since the absence of essential infrastructure such as cargo terminals and jetties has been one of the reasons for the slow development of water transport in the region, the Project will help establish six multi-modal freight terminals - at Varanasi, Ghazipur, Kalughat, Sahibgunj, Triveni and Haldia.  In addition, five new Roll On-Roll Off (RO-RO) crossings at different locations will help trucks and other vehicles transfer from road to river and vice versa. The six new cargo terminals have the potential to evolve into thriving logistics hubs, providing jobs for thousands of people in one of the poorest and most populous parts of the country. The Project will also help set up a vessel repair and maintenance facility at Doriganj.

In addition, the Project will support the modernization of the ageing Farakka lock, built some 40 years ago.  At present, vessels often have to wait for up to six hours to cross the lock; nor is two-way traffic possible through its narrow gates.  To facilitate the faster and smoother passage of boats through the passage, the lock will not only be upgraded but a new lock will also be built, allowing barges to travel both upstream and downstream simultaneously.  These improvements will dramatically reduce the time taken to cross the lock.

Furthermore, the Project will help set up a state-of-the-art River Information System (RIS). Among its many benefits, the RIS will enable barge-operators and cargo-owners to track their vessels, locate berths in advance in terminals and better plan their logistics.  To make navigation safe both day and night, the Project will help mark out the central channel for boats to ply in and install night navigation facilities. Besides, detailed protocols are being laid down for dealing with emergencies, including for tackling the spillage of oil from boats.

Since the Ganga occupies a special place in the social, cultural and environmental landscape of the country, the Inland Waterways Authority of India (IWAI) has sought to adopt the least intrusive methods of making the river navigable. It has therefore followed the principle of ‘working with nature’ while planning the Ganga waterway.

Unlike many of the world’s major watercourses, the Ganga is a seasonal river that swells with the monsoon rains and recedes in the dry winters.  While small boats can indeed ply along this seasonal river, large cargo barges need a minimum depth to sail in.  Shipping on the Ganga has thus been limited by the varying depths of water found in the river. Currently, traffic is largely limited to the river’s downstream stretch between Farakka and the Haldia where the water is deep enough - 2.5 m to 3.0 m - for boats to sail in throughout the year.

Typically, making such a river navigable would call for large scale dredging of the riverbed to attain the depth needed by larger boats, especially for large barges carrying up to 2,000 tonnes of cargo. In the Ganga’s case, special care has been taken to accommodate such vessels while keeping the need for dredging to the minimum.

A 45 metre-wide channel has been earmarked in the river’s deepest part, and the Least Available Depths (LAD) needed for navigation has been determined keeping in mind the need to reduce dredging.  The channel’s depth thus follows the river’s natural gradient in different stretches and is sufficient to support the two-way movement of large barges.

These measures will reduce the need for dredging to just 1.5 percent of the river’s annual silt load of 10-11 million cubic metres.  Even this limited dredging will only be done when absolutely necessary and then too using modern, less intrusive technologies. Among these technologies is the proposed water injection method that will use water pressure to liquefy silt deposits and wash them away. The dense slurry that results will then be deposited - either naturally or through induced currents - into depressions along the riverbed, ensuring that sediments remain within the river’s ecosystem.

Where large shoals and islands exist, temporary structures made of natural materials such as bamboo will be erected to channelize the water flow. These temporary structures – or ‘bandals’ as they are known – will be especially erected near aquatic sanctuaries to protect the Ganga’s diverse fauna.

Contracts will also be tailored to reduce the need for dredging.

IWAI is also ensuring that water traffic does not impact the two aquatic wildlife sanctuaries that fall along this stretch of the river -- the Kashi Turtle Sanctuary at Varanasi and the Vikramshila Dolphin Sanctuary at Bhagalpur.

As a first step, information about these protected aquatic habitats and other sensitive areas such as wetlands will be fed into the new River Information System being developed under the World Bank-supported Project.  This will ensure that vessels plying in these areas comply with the operational framework that has been put into place for minimizing impacts in sensitive zones. This framework includes:

·         In other areas that are known to be the habitat of valued aquatic species, no dredging will be allowed in the breeding and spawning seasons.

·         The speed of barges travelling along the protected areas of the sanctuaries will be restricted to 5km per hour.

·         All vessels plying on the Ganga will be fitted with noise control and animal exclusion devices so that aquatic life is not unduly disturbed.

·         All vessels will also have to comply with `zero discharge’ standards to prevent solid or liquid waste from flowing into the river and affecting its biodiversity. 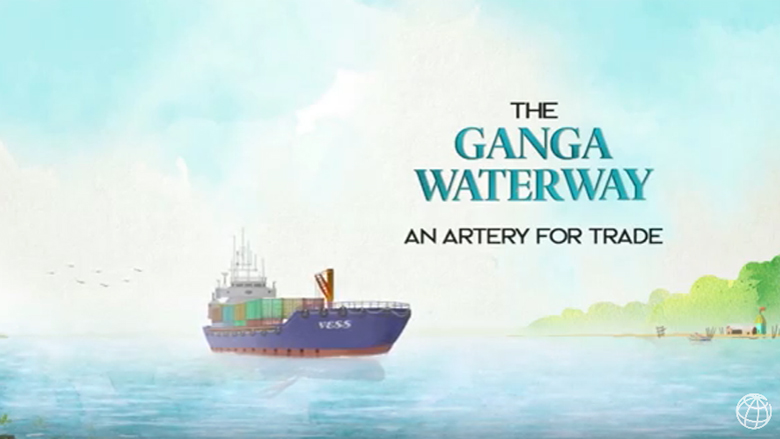