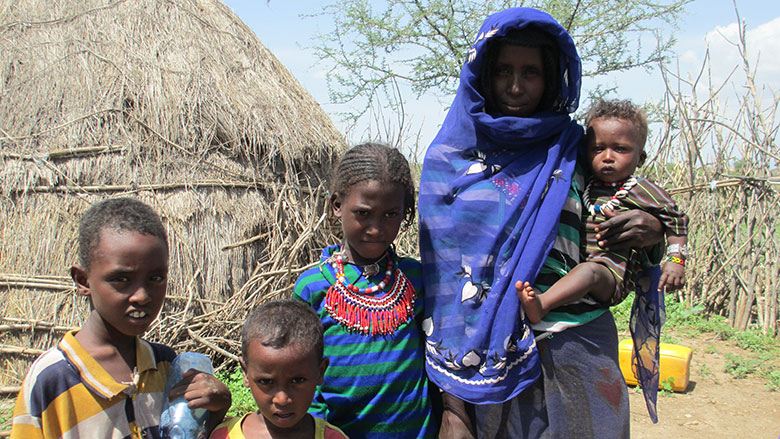 ADDIS ABABA, November 18, 2020 –  Zebiba Mustafa, a single mother of five, lives in a remote village in Ethiopia’s Afar region. Ten years ago, her sister, Zeineba, moved to the capital city Addis Ababa, where she runs a successful mini-market.

“I love my children and I am doing my best to take care of them but my life is not easy,” said Zebiba. “If it was not for my sister Zeineba, who sends me money from Addis Ababa, we wouldn’t make it.”

The difference between Zebiba’s life in the countryside and Zeineba’s life in the city serves as an example of the current state of economic development in the country. This difference in poverty levels is the main subject of the new Ethiopia Poverty Report, Promoting Equitable Growth for All Regions, which reveals that while the national poverty rate declined, this was more the case in urban areas than in rural areas.

The report, which complements the country’s National Poverty Assessment, provides poverty profiles for each region and aims to shed some light on why some regions registered fast poverty reduction between 2011 and 2016, while others did not. .  Although national poverty reduced from 30% to 24%, there were strong differences in the nature of poverty reduction in urban versus rural areas. Nearly all 10 regions experienced strong poverty reduction in their urban areas, while only the Somali and the Southern Nations, Nationalities, and People’s regions saw significant reductions in rural poverty.

“Poverty in urban areas fell from 26% in 2011 to 15% in 2016,” said Arden Finn, an economist in the World Bank’s Poverty and Equity Global Practice, and co-author of the study. On the other hand, there was limited progress in rural areas, where poverty  decreased from 30% to 26% over the same period.”

The study revealed that across most regions, better off households like Zeineba’s gained the most, while poorer households such as Zebiba’s did not experience any progress. As such, inequality increased in all regions, with the exception of the Somali region. The report notes that an increase in inequality is likely to hamper sustained poverty reduction in the future.

“If we look at non-monetary measures of welfare, on average urban areas performed far better than those that are more rural,” said Berhe Mekonnen, an economist with the World Bank’s Poverty and Equity Global Practice, and co-author of the study. “In the predominantly pastoralist regions of Afar and Somali, non-monetary indicators are particularly low. For instance, in Addis Ababa primary school completion for youth is 56%, but only 24%in the Somali region.”

The economic consequences of the COVID-19 (coronavirus) pandemic threaten to undo much of the gains that were experienced in urban areas, the report notes. Job losses in urban areas since the onset of the pandemic have been far higher than in rural areas, and have been particularly high for those working odd jobs and for the self-employed. Although employment seems to be picking up gradually, the report says it has yet to reach pre-pandemic levels and its effects will continue to be felt predominantly in urban areas.

Although Zebiba lives in a rural area, she may also be significantly impacted by the economic effect of COVID-19. While the magnitude of the virus’ impact on employment in rural areas is relatively minimal, vulnerability to poverty in rural areas is higher, according to the report. This means that since a large share of the population in rural areas, including Zebiba, are barely making ends meet and live just above the poverty line, even a small decrease in average income could lead to significant increases in poverty.

The COVID-19 pandemic could also further exacerbate existing inequalities in schooling outcomes, the report says, particularly in regions that are already lagging behind in human capital indicators such as in Somali and Afar.

To continue the poverty reduction and narrow the regional gaps, the study states that while measures leading to continued broad consumption growth are a necessary pre-condition, they need to include specific measures to ensure consumption growth for the poorest, most vulnerable households such as Zebiba’s. Given the largely agrarian nature of Ethiopia’s rural economy, the report notes poverty reduction requires continued effort and investment in improving agriculture, off-farm job creation, and human capital.