The Central African Republic: Investing in Human Capital to Protect the Future 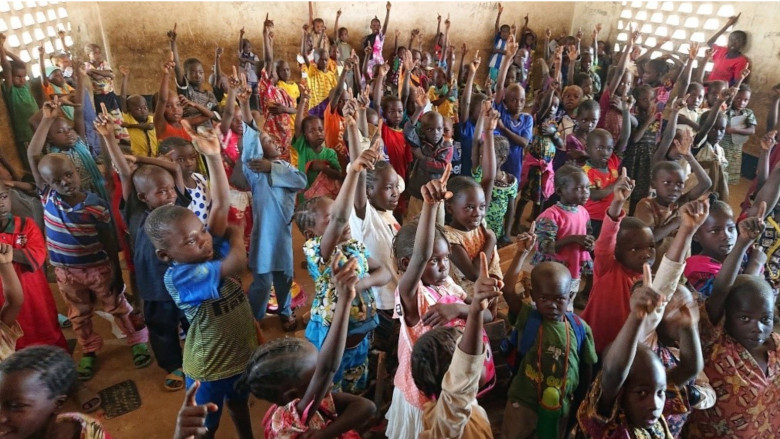 1. Economic activity decelerated in 2020 for the fifth successive year

Hit by the COVID-19 pandemic, real GDP growth decelerated to 0.8 percent – its lowest level over the past five years. On the demand side, private consumption contracted in 2020, reflecting a decline in household income due to the pandemic. On the supply side, the positive dynamic of the agriculture sector prevented the economy from entering a recession, and the forestry and telecommunications sectors were more resilient than expected. Despite inflationary pressure from supply chain disruptions, inflation declined to 2.3 percent in 2021 (year-to-year) – below the regional convergence criterion. The fiscal position has deteriorated, and public debt declined further to 44.1 percent of GDP in 2020 – thanks to debt cancelation and rescheduling. CAR remains, however, at high risk of debt distress due primarily to its low domestic resource mobilization and exports revenues. The current account deficit widened from 4.8 percent of GDP in 2019 to 8.7 percent of GDP in 2020, driven by weak external demand and private transfers as well as an increased deficit of the balance on goods as good exports declined and non-oil imports were boosted by donor-funded investments with the COVID-19 pandemic. 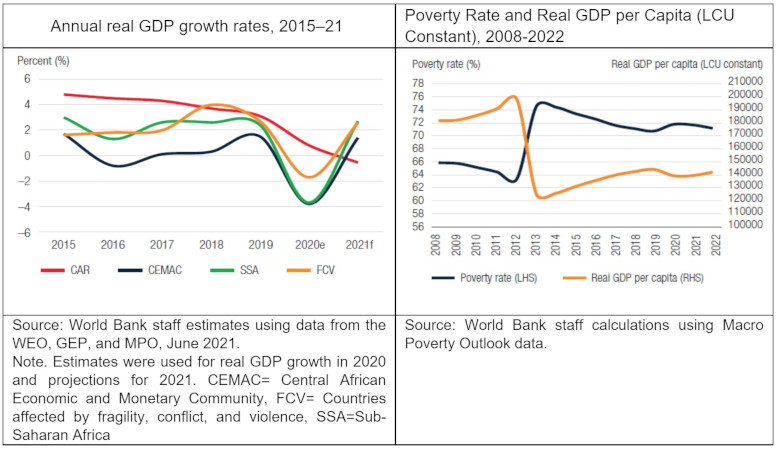 2. The economic outlook is positive but highly vulnerable to headwinds

Real GDP is projected to decline by 0.6 percent in 2021 – 5.8 percentage points below pre-COVID-19 and elections projections – leading to a 2.6 percent decline in income per capita. With COVID-19 and renewed insecurity, It is now estimated that CAR could lose 4 years in per capita income growth, with estimates showing that GDP per capita is expected to remain at the same level in 2023 as in 2019. Provided that stability and security returns, economic growth is expected to recover in the medium term, supported by higher agricultural and industrial output levels on the supply side and high private consumption on the demand side. Still, more than 3.5 million inhabitants are expected to continue to live in extreme poverty in 2022-24, and food insecurity and limited access to basic public services, especially in remote areas, will remain major concerns.

3. CAR needs to invest in human capital to protect the future

According to the report, public debt increased from 69.2% of GDP in 2014 to 48.5% in 2018. Although, CAR still presents a high risk of debt overhang, its efforts to rationalize public expenditure and resolve domestic arrears have enabled it to post better public debt trends than CEMAC and sub-Saharan African countries on average and to come closer to the debt levels of its peers. Going forward, the Government intends to continue on this path by rationalizing public expenditure and monitoring the recruitment of civil servants for more efficient management of the wage bill.

Under the current circumstances, CAR human capital growth is expected to fall from 0.6 percent in 2020 to 0.15 percent in 2050, driven by persistent underinvestment in social sectors. Reversing this downward trend would require bold reforms and coordinated multisectoral interventions in social sectors, including:

i. Addressing early childhood development challenges to lay a solid foundation for both adult prosperity and resilience and the country’s economic growth and competitiveness;

iv. Minimizing the adverse effects of recurrent conflicts on learning through adequate policy to mitigate and eventually remediate the loss of learning that has resulted from school closures during times of crisis;

vi. Securing domestic revenue to unlock fiscal space and the ability of the government to invest in human capital.