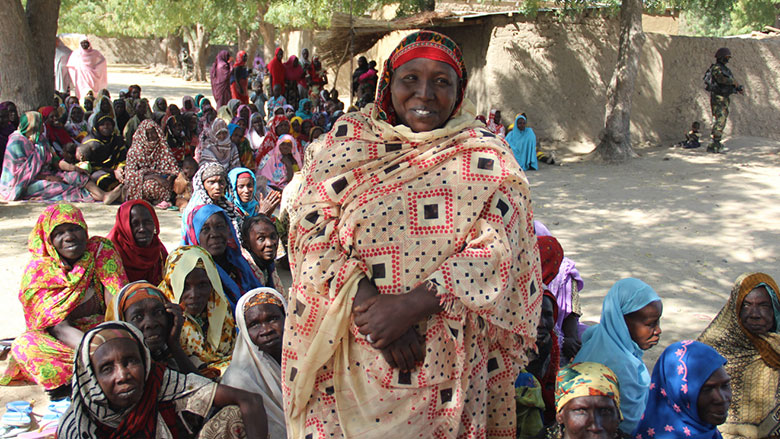 In recent years, poverty has become increasingly concentrated in northern Cameroon. More specifically, in the Adamawa, North, and Far North regions, the harsh climate, soil degradation, and low levels of education, particularly among women, as well as remoteness and limited access to markets are trapping these territories and their residents in a spiral of poverty.

What can be done to promote growth and economic development in these regions?

Adapted from a series of portraits of women who have benefited from World Bank-financed projects highlights a number of initiatives that are making a difference in these regions. 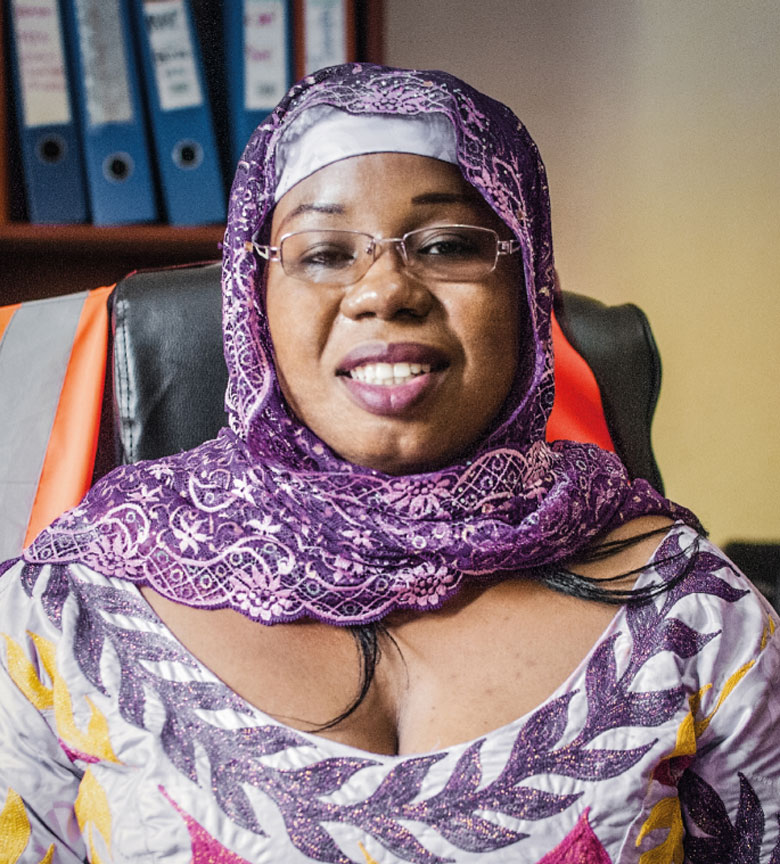 “The presence of women in the agricultural sector is important. PIDMA encourages us to excel in this sector and provides us with the assistance necessary to lift our families and communities out of poverty.”

As a child, Marian helped her parents in the fields. She did not think that as an adult, she would head a sorghum cooperative. She is one of 140,000 farmers who have benefited from the agricultural services and products provided by the Agriculture Investment and Market Development Project (PIDMA), implemented in 2014 to boost the productivity and competitiveness of the maize, cassava, and sorghum value chains. This project has allowed sorghum producers, working together in cooperatives, to increase the sales price of their produce by 20% on average, while maize producers have seen a 13% increase.

Through the introduction of agricultural diversification systems in the women’s associations benefiting from nutrition subprojects, 4,252 households have also produced at least two new food types. Furthermore, the construction of 35 water points has provided potable water to close to 35,000 persons.

Boosting Productivity and the Sale of Livestock Products 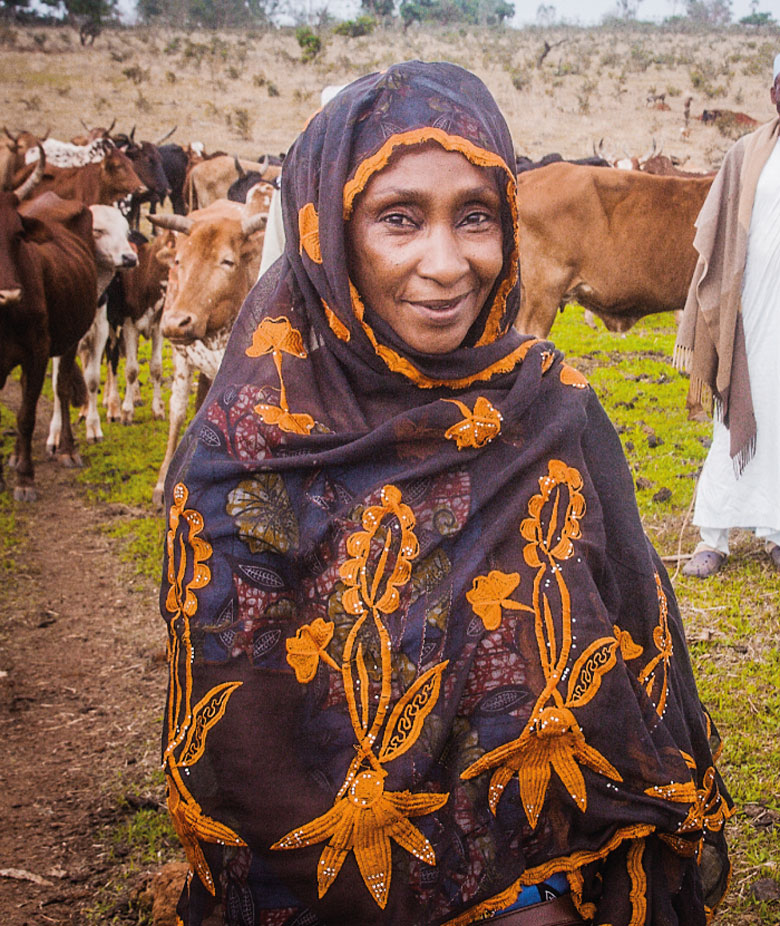 “The sale of cow’s milk allows me to pay my children’s school fees. Heading a large family means that all eyes are on me. I would not be able to meet everyone’s needs without the assistance of PRODEL.”

The Adamawa region is known for its vast plains and especially for its herds of cattle grazing for as far as the eye can see. Cattle ranching, as well as the rearing of small ruminants such as goats and sheep, often provides one of the very few means of subsistence for the residents of this region. This is the case with Mayrama, whose cow herds produce roughly 100 liters of milk per day, guaranteeing her a stable source of income for her household. Like the 900 households and roughly 10 women’s groups benefiting from the Livestock Development Project (PRODEL), she has been able to improve and increase milk production and, along with many other livestock farmers, gain access to veterinary services and receive quality inputs.

The project has also created roughly 30 productive partnerships to assist with the development of livestock sector value chains and financed 200 business plans.

Close to 80% of the farmer’s organizations that receive assistance have adopted new technologies. 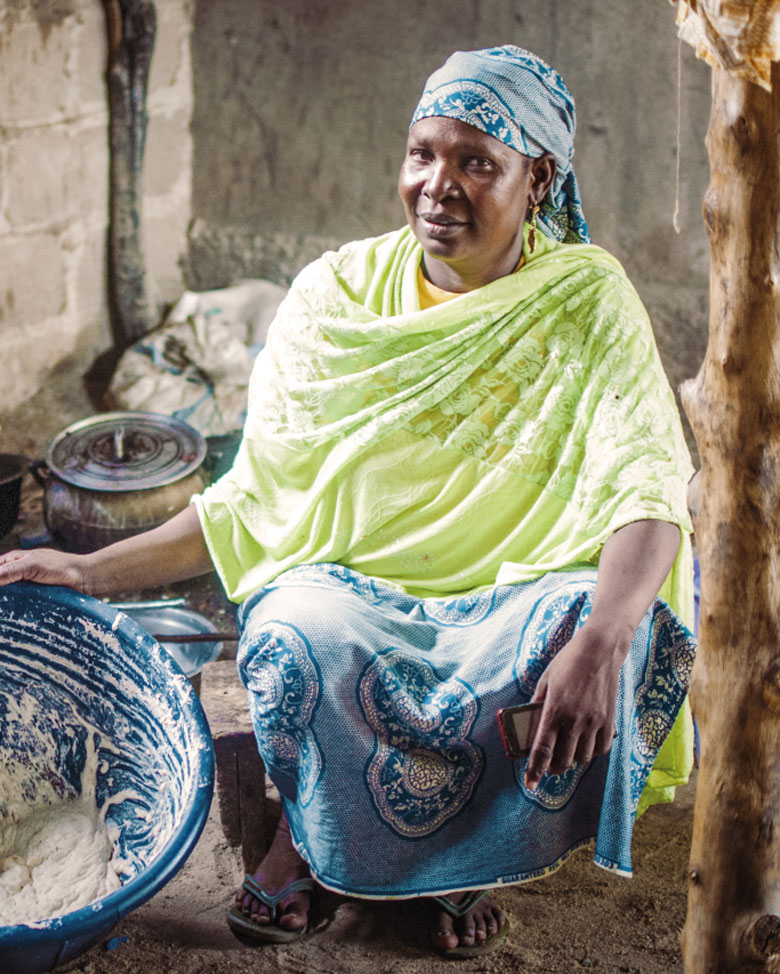 “The rehabilitation of the Maroua-Kousseri road will boost trade and restore hope in communities such as my own, which were placed at a disadvantage in terms of work-related transport and opportunities to sell their products.”

Aissatou sells rice fritters and has lived in Maroua for more than 35 years.  Like the vast majority of residents and most traders in the Far North region, she lives with the dual hardships of witnessing the terror and despair visited on her region by the Boko Haram terrorist group and helplessly watching the deterioration of the main corridor that once provided her with her share of travelers and potential customers.

To rehabilitate National Road 1 (N1) between Mora and Kousseri and avoid the risk of a worsening of the social situation in the region, the World Bank is financing the CEMAC Transit-Transport Facilitation Project. 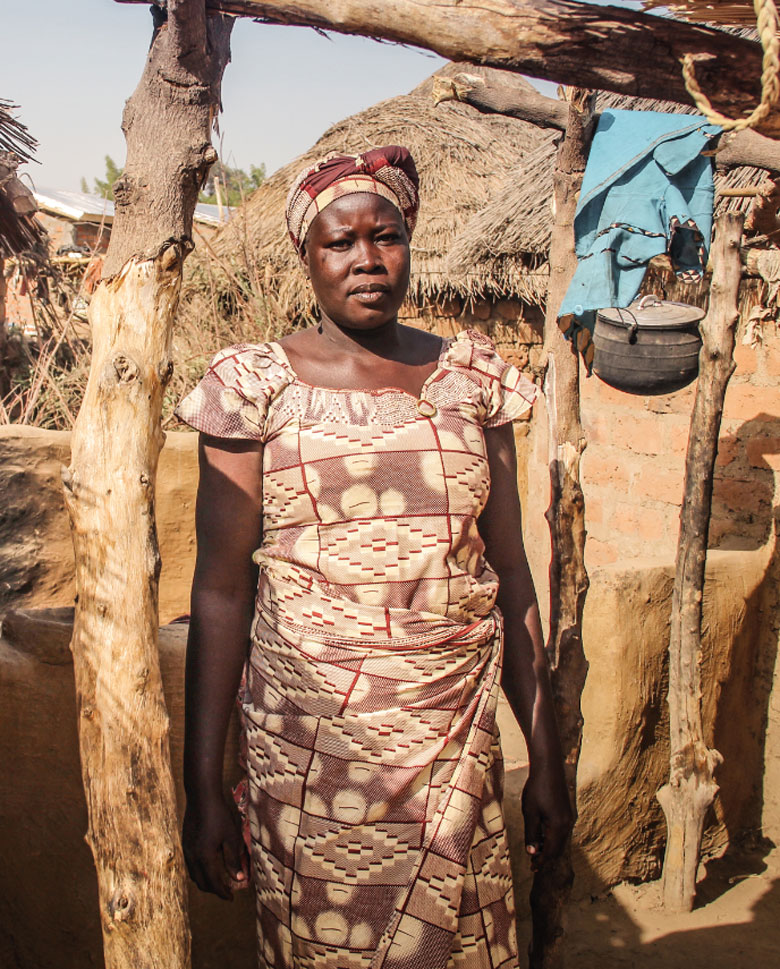 “By rebuilding embankments and replacing our homes with solid structures, we can sleep peacefully and no longer be afraid of heavy rains. My family is safe, my animals are safe, and my crops are no longer threatened.”

As the rainy season approaches, the residents of Maga, Vélé, and Kai-Kai communes eye the Logone River with great apprehension. Suzanne, a 38-year-old rice farmer and the other residents of Vélé village, located on the edge of the Logone River embankment, vividly recall the most recent and unusually heavy flooding caused by the Logone River, which ravaged crops and homes and killed large numbers of livestock. Suzanne’s family lost virtually everything in these floods—its home, crops, and herd of goats.

The aim of the Flood Emergency Project, implemented after these devastating floods in 2012, is to rehabilitate key hydraulic infrastructure and strengthen natural disaster prevention and preparedness.

The project has facilitated the relocation of close to 2,800 families such as Suzanne’s and the rehabilitation of more than 97 kilometers of flood-protection infrastructure and roughly 6,000 hectares of rice-growing areas, allowing rice farmers to boost their yield and reap two harvests per year. 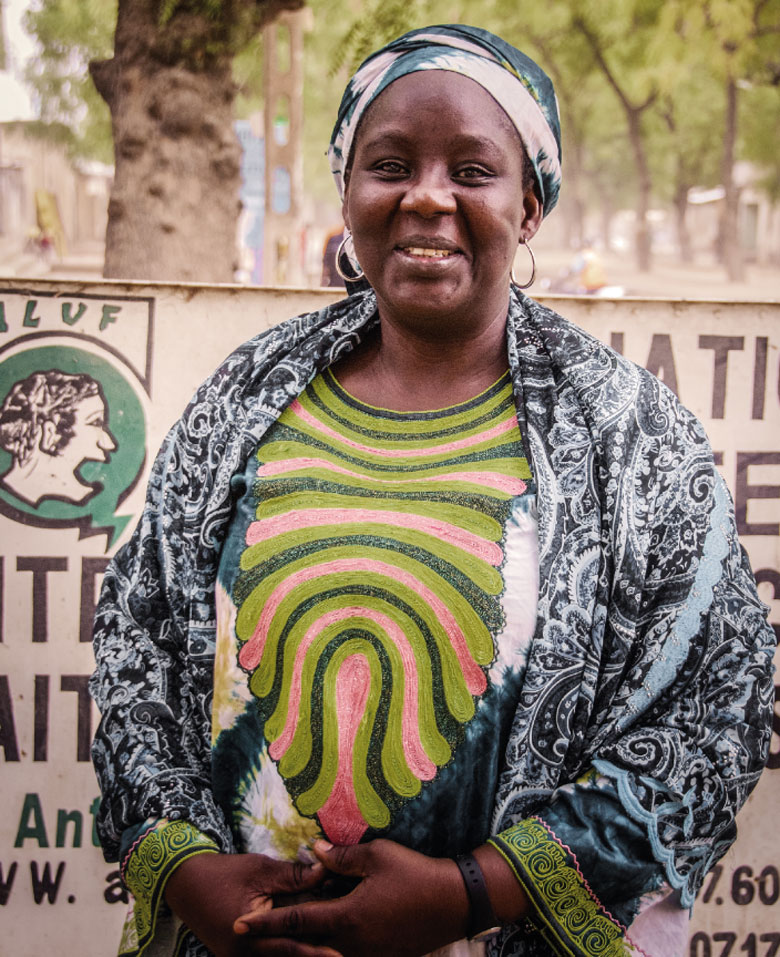 “I am working solely to ensure that girls and women are respected; that they can express themselves freely and live in a world free of violence.”

Mariam got married when she was very young and grew up in a patriarchal environment where the ideas of young girls and women did not count as much as those of men. When she was very young, she saw that she was treated differently from her brother, although he was younger. As an adult, she decided to devote her time to giving a voice to women and young girls. Gender-based violence is one of the most common human rights violations in the world. In 2018, the World Bank introduced a gender component into all the projects in its Cameroon portfolio to take into account gender-based violence in the implementation of the projects that it finances.

The World Bank has also partnered with Mariam’s Association to Combat Violence Against Women in order to monitor project implementation in the Far North region and raise the awareness of women and young girls regarding the different forms of physical, sexual, and psychological violence and provide victims and survivors with psychological support. 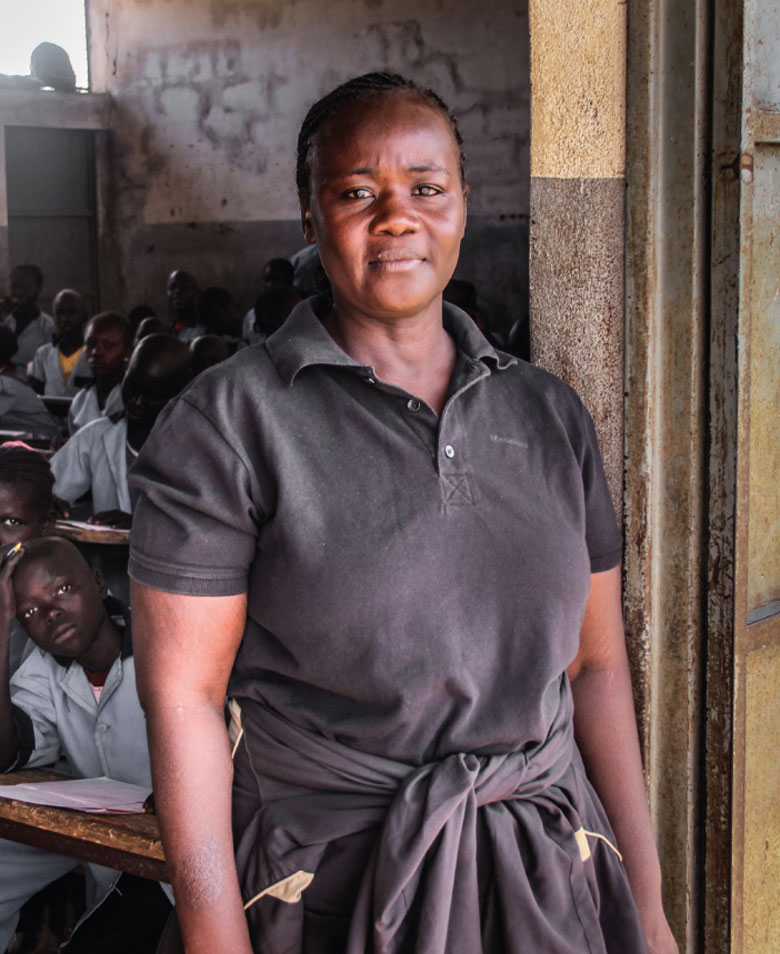 “Awareness-raising campaigns targeting primary school girls between the ages of 5 and 15 have helped to combat prejudice and promote a positive view of the education of young girls.”

How many times has Julie, a public primary school teacher in Garoua city, had to stand by helplessly and see her students struggle to properly follow classes and do their school work?  Overcrowded classes and a shortage of books and teachers cause some students to fall behind in learning or drop out of school. This is particularly true of young girls who, in addition to facing these problems, may be forced to leave school to get married or to help with household tasks in the family home.

The Equity and Quality for Improved Learning Project (PAEQUE) seeks to improve equity and the quality of primary education in Cameroon, with emphasis on the disadvantaged areas.

With the recruitment of more than 9,000 teachers, 45% of whom are women, the project has helped ease the shortage of primary school teachers in the disadvantaged and priority education areas. It has also led to an improved student-to-textbook ratio, which was three-to-one in the 2016-2017 school year compared to twelve-to-one prior to that period.

Click on the image to discover the complete book: Everyday Life in the North: The World Bank in Action in Cameroon.