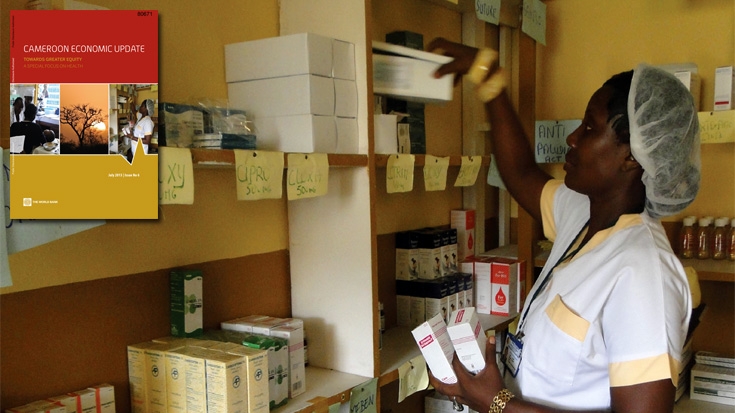 YAOUNDÉ, September 26, 2013—Cameroon, a central African country that has set its sights on becoming an emerging economy by 2035, will have to prioritize health care access for the poorest segments of the population if it is to make solid progress toward lasting growth. This diagnosis is advanced in Cameroon Economic Update, a twice-yearly World Bank publication designed to promote dialogue on various aspects of the country’s outlook. Its sixth issue is devoted to the subject of health.

Even though Cameroon’s proportion of doctors (1.9 per 1,000 inhabitants) is twice the minimum recommended by the World Health Organization, the country’s health statistics are paradoxically behind the curve. Life expectancy for Cameroonians has decreased by about two years since 1990, while it has increased by an average of five years in the rest of sub-Saharan Africa. Worldwide, Cameroon is also among the countries where the mortality rate for children under five years of age (122 deaths per 1,000 live births) has decreased the least.

Yet Cameroon spends more money on health than any other sub-Saharan country (except South Africa): US$61 per capita, as opposed to US$51 on average. It is Cameroonians themselves, however, who shoulder the majority of this financial burden. “Out of those $61, the State finances only $17; and out of that sum, $8 comes from international donors,” notes Raju Jan Singh, the World Bank lead economist for Central Africa and the main author of the report. “This means there is a strong correlation between health statistics and revenue statistics,” he adds, “with well-off households and wealthy regions having better access to health services.”

The implications of these statistics, the report says, is that the more money a woman has, the more likely she is to have qualified professional assistance during childbirth, whereas in poor and rural communities, women and children will have a much higher risk of dying. The geographic disparities are striking: 40% of the country’s doctors practice in the Centre region (which includes Yaoundé, the capital), where only 18% of the population lives. On the other hand, the Far North region, which also holds 18% of the population, employs only 8% of Cameroon’s doctors.

Why are the disparities among geographic regions and economic sectors so stark? Direct payment for on-demand health services will be a factor of inequality to the extent that it depends on the patient’s own financial means, as noted in Cameroon Economic Update’s latest issue. “It is in the self-interest of health care personnel to work in an urban setting, where their clients have higher salaries and their own chances for professional advancement are greater than in rural areas,” explains Gaston Sorgho, a World Bank health specialist and co-author of the report. “Whatever their social condition, Cameroonians pay a high price for care that is often deficient,” he adds, “and the country has no risk-sharing mechanisms such as health insurance, a situation that perpetuates the cycle of poverty.”

" Whatever their social condition, Cameroonians pay a high price for care that is often deficient and the country has no risk-sharing mechanisms such as health insurance, a situation that perpetuates the cycle of poverty. "

World Bank health specialist and co-author of the report

A pilot project covering four regions (Littoral, Southwest, Northwest and East) and 3 million inhabitants (out of a total population of 20 million) was recently founded, with World Bank support, to model the soundness of this approach.

No fewer than 400 health centers have signed results-based financing (RBF) contracts and are being paid according to the quality and quantity of care provided. Centers situated in areas considered difficult to serve receive additional credit and bonuses. “Adopting a remuneration system based on performance is an effective way to change health care providers’ behavior,” says Sorgho, adding that in Cameroon, absenteeism is a major problem in isolated rural areas. According to a recent World Bank survey, in the Southwest region alone 32% of health centers were operating (on the survey date) with a single staffer at each center.

In the Littoral region, the last few months have shown encouraging results, as centers where RBF was introduced demonstrated a significant increase in usage of critical services such as prenatal care, child vaccinations and modern contraception methods. The sub-Saharan African countries Rwanda, Burundi and Sierra Leone, which have established results-based financing as a national policy for health care, have also seen tangible results.

Raju Jan Singh, the economist, expressed optimism about Cameroon’s ability to improve its health care performance record, since the government adopted a budget program in 2013 aimed at improving the productivity of public expenditures. “With this framework, ministers will enjoy greater autonomy in planning and executing their budgets, but in exchange they will be expected to answer for the results. That is why the country needs better data-gathering techniques, because to get results, you need reliable data,” he concluded.