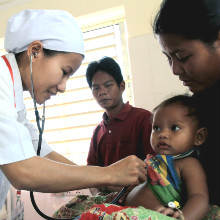 The World Bank In Cambodia

Cambodia: Commitments by Fiscal Year (in millions of dollars)*