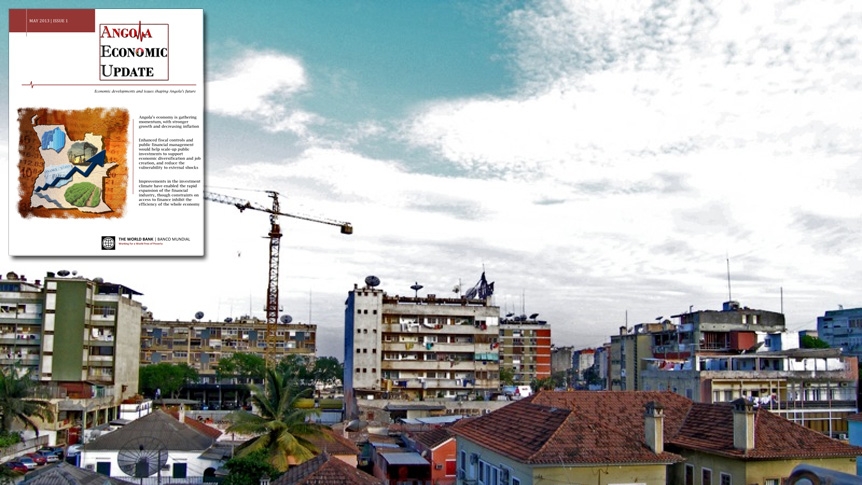 LUANDA, June 20, 2013 – Angola is experiencing a robust recovery following several years of relatively slow growth in the wake of the global financial crisis, however, a number of key structural weaknesses pose threats to the country’s recent positive growth, according to a new report released by the World Bank Poverty Reduction and Economic Management team today.

The Angola Economic Update (AEU), the first in a series of economic reports for the country, examines recent economic developments and evaluates the implications of macroeconomic trends and policy reforms based on the government’s development objectives. The goal of the AEU is to provide policymakers, academics, private sector representatives, civil society and the general public with a review of Angola’s recent economic developments and its evolving prospects for the future.

“The good news is that Angola’s economy is gathering momentum, with stronger growth and decreasing inflation,” said Juilo Revilla, the World Bank’s lead economist for Angola. “We also note that improvements on the macroeconomic front have enabled the rapid expansion of the financial industry.”

According to the AEU, Angola’s gross domestic product (GDP) is estimated to have expanded by more than eight percent in 2012, spurred by high oil export prices and rising production volumes. The fiscal and external accounts are enjoying large surpluses and inflation has fallen to single digits. This improvement in Angola’s macroeconomic position reflects the progressive sophistication of its economic governance.

However, Angola remains dependent on oil exports. While oil-export revenues have recently rebounded, the economy remains highly vulnerable to both global price volatility and domestic supply shocks. Meanwhile, the low rate of investment presents a serious concern over the longer-term. In this context, enhancing economic management can help transform Angola’s natural wealth into productive capital and lay the foundation for economic diversification and non-oil competitiveness, which will ultimately be as vital to employment, income and poverty reduction as robust GDP growth.

The AEU also includes a special focus on the financial sector. Access to finance is essential to the growth of the non-oil economy, particularly manufacturing and agriculture. Yet, despite the rapid expansion of the Angolan banking industry over the past two decades, weak financial systems and a lack of reliable financial information are causing distortions in the allocation of credit, ultimately damaging the efficiency and competitiveness of the economy as a whole.