Q&A: How is Angola Reaching the Poor and Vulnerable During Covid-19?

Josefina Nangombe and André Himi are among more than 247,000 heads of households benefiting from the country’s new cash transfer program, Kwenda. Both live in the Huila Province of Angola—a region famous for basket-making—and began receiving quarterly government payments of 25,500 kz, approximately $40, last summer. The COVID-19 (coronavirus) pandemic, coupled with falling oil prices in Angola has resulted in an economic crisis expected to have major detrimental impacts on human capital and poverty levels. Under these circumstances, Kwenda has been a lifeline for those like Josefina and André. With the new funds, Josefina, a mother of four, is acquiring pigs for breeding which she will sell, using that income to support her family. André, a skeptic at first, now sees hope for his dream of educating his children come true.

These testimonies are an example of the positive impact the Kwenda program, launched in May 2020, is having on Angola’s poorest. The program promotes financial inclusion by delivering payments digitally for most beneficiaries. Kwenda also goes beyond cash transfers and provides poor and vulnerable households with access to human development services, such as health and education, and economic inclusion activities. Implemented by the government’s Social Support Fund (FAS), Kwenda aims to reach 1.6 million low-income families nationwide, many of them (60%) female-headed households. 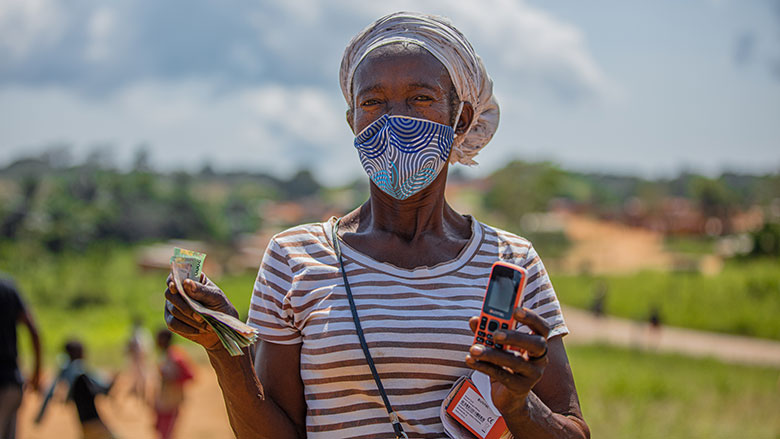 Kwenda is the first cash transfer program in Angola delivering social assistance in the form of cash and digital payments along with human development and economic inclusion activities. It is playing a critical role in meeting the needs of the poorest and most vulnerable, especially in light of the economic turmoil caused by COVID-19.

Kwenda is more than just a government payment program; it provides beneficiaries with access to health and education services, birth registration support, among other things. Preliminary findings suggest that recipient families have had improved access to these services than ever before and are better able to meet their needs given the increased purchasing power that the program offers. Furthermore, all beneficiaries get either a sub account, a simplified bank account or a mobile account. The intent is for the sub accounts to also be converted to fully functioning bank accounts in the future. This digitization of payments is bringing the previously unbanked into the formal financial sector and acts as a gateway to broader financial services, allowing them to invest or start their own businesses, save, and manage risks, among other things.

How are people receiving payments from the program – electronically or via cash?

This program was launched during the beginning of COVID-19 and, to that end, needed to be flexible to reach beneficiaries efficiently and safely. In fact, the majority of Kwenda beneficiaries receiving e-payments are getting access to the financial system for the first time in their lives. There are several different payment modalities depending on the context, each tailored to the particular needs of target communities. A significant share of payments are provided through digital means, such as mobile money accounts which were introduced for the first time during the pandemic, simplified bank accounts or sub-account under the program linked to ATM cards that can be used at any ATM terminal or Point of Sale (POS) terminal. Based on the context, however, particularly due to infrastructure and connectivity challenges, some beneficiaries receive payments through physical cash but still receive a debit card linked to a bank account created by the program. As the program continues to expand, efforts are being made to strengthen the financial access network by engaging with local agents, and community workers, to support digital payments in very remote communities, where cash payments are more the norm. These community workers (ADECOS) and the social action centers (CASIs) play an important role in Kwenda’s implementation at the local level, helping with registration, payments, and grievances as well as facilitating beneficiary access to health and education services.

How has this program benefited women in particular?

Government-to-person (G2P) payments can be a powerful inroad to financial inclusion, overcoming the significant barriers many women face by directing digital payments to women beneficiaries. As many of the targeted households are female-headed (60%), these cash transfers provide additional resources that empower women to make livelihood enhancing decisions such as housing improvements, sending their children to school and paying their fees. As we move further into digital payments, we know that digitizing a predictable income stream for women is a way to catalyze income-generating activities among them. In the municipality of Seles, for example, a group of women got together and created a local market in their community for the first time, where they sell a range of different products with other community members, multiplying the benefits received by the program.

What have been some of the biggest challenges in rolling out this new program?

Angola is one of the largest countries in Africa, where a significant portion of the population lives in remote areas. Infrastructure is fragile and road conditions are poor, which means it can be a challenge to reach people in need. The lack of transportation and telecommunications make it especially difficult to gain access to beneficiaries. In many rural communities, there are no markets, and the presence of payment points and agents are scarce. This is why the program uses different payment tools—combining digital mechanisms with physical cash delivery—to overcome some of these barriers. The program also has payment points where beneficiaries can collect their payments. For the elderly and disabled, community workers will go to their homes and provide the benefits in person–this is a way to ensure everyone is included.

Another challenge is the low level of literacy among beneficiaries and the lack of a national ID. To address this, the program facilitates the opening of bank or mobile accounts for beneficiaries with the program specific Kwenda ID card. Additionally, it is also implementing a basic financial literacy module for beneficiaries. The World Bank’s Finance, Competitiveness and Innovation (FCI) and Social Protection and Jobs (SPJ) Global Practices have come together to push forward the agenda on G2P digitization in the country. The Kwenda project, led by SPJ through a $320 million investment project financing, serves as an entry point to promote digital financial services by leveraging reforms supported by FCI on the payment system legal framework and core instant payment infrastructure. As of January 2022, the program has registered more than 502,000 families, and nearly 247,000 families have already received at least one cash transfer payment since May 2020.