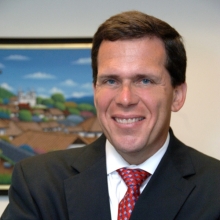 Stephen Zimmermann is the Senior Adviser to the Governance Global Practice Group where he helps guide the Bank’s anti-corruption, justice and rule of law work. He provides strategic advice at both a global and country level as well as represents the Bank at the G20 Anti-Corruption Working Group and in other international forums addressing global corruption and integrity work.

He was previously the Director of Operations for the World Bank Integrity Vice Presidency (INT). In this position, he had a leading role in developing and implementing an expanded strategy for the World Bank’s integrity agenda, including the introduction of negotiated resolutions of investigations and expansion of joint investigations with national authorities. In addition, he led efforts to reach a historic Cross-Debarment Agreement signed by the World Bank and four leading regional Multilateral Development Banks for mutual enforcement of sanctions decisions.

Prior to joining the World Bank Group, Mr. Zimmermann was the first former Chief of the Office of Institutional Integrity for the Inter-American Development Bank where he led the creation of the unit and its positioning in the Latin America region and the global anticorruption community. He also has served as the interim Chief of Staff for the Independent Inquiry Committee into the United Nations Oil for Food Program. Mr. Zimmermann has previously worked as the Senior Policy Officer and Senior Counsel for the World Bank’s Department of Institutional Integrity, the predecessor to the Integrity Vice Presidency.

From 1991 until 1999, Mr. Zimmermann was an Assistant United States Attorney in the District of Maryland. During his tenure as a federal prosecutor, he successfully prosecuted numerous complex cases involving corruption, financial fraud, tax evasion, health care fraud, securities fraud, and money laundering. He has worked closely with major federal law enforcement agencies, as well as prosecuting offices overseas.
Prior to joining the United States Attorney’s Office, Mr. Zimmermann worked as an attorney with Wilmer, Cutler & Pickering. His practice involved matters involving securities fraud, white-collar criminal matters and a variety of commercial civil litigation.