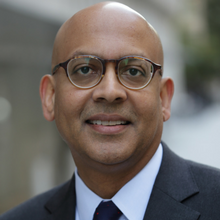 Ranjit Lamech is the Regional Director of the World Bank's Infrastructure Department in the East Asia and Pacific region. He is an energy expert with close to three decades of experience in financing projects and advising governments, energy utilities and private sector partners on energy security, energy efficiency, regional energy trade and reforms. Mr. Lamech has held technical and leadership roles across the World Bank’s energy practice, most recently as the Energy Practice Manager covering South and Central Europe, Western Balkans and Central Asia.  In the 1990s and early 2000s, he led the Bank’s energy lending and advisory program in China and Turkey during a transformational period of energy market reforms, diversification of ownership and a shift to cleaner energy sources. Mr. Lamech, an Indian citizen based in Washington, D.C., began his career in 1986 with the Tata Electric Companies in Bombay, India.

He has an MS in Mechanical Engineering from Stanford University (1986), an MPA from the Kennedy School of Government at Harvard University (1992), and the International Tax Program Certificate from Harvard Law School (1992).