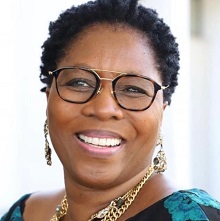 Ayanda Dlodlo, a South African National, serves as the World Bank Group Executive Director for Angola, Nigeria, South Africa since November 1, 2022. She served as Alternate Executive from April to October, 2022.

Ms Dlodlo also served as South Africa’s National Focal Point for the Africa Peer Review Mechanism (APRM) and was named as the Special Envoy representing South Africa as a founding Member State at the Open Government Partnership (OGP).  Ms Dlodlo is a member of the National Executive Committee (NEC) of the ruling party; African National Congress (ANC) in South Africa where she is also the Chairperson of the Legislation and Governance Sub-Committee.  She served as the Secretary General of the uMkonto weSizwe Military Veterans Association from 2007 to 2012 and was also the Head of Department (HoD) for Safety and Security in the Gauteng Province of South Africa.  In addition, she also headed the Strategic Operations at the Directorate of Special Operations (Scorpions).

Ms Dlodlo also has vast experience in the Private Sector and that of State-owned enterprises including Public-Private-Partnerships; having worked for the Associated British Ports, Transnet (South African Rail and Port Authority), New Jersey Ports Authority, Telkom and Sanlam.

Ms Dlodlo holds a Masters Degree in Business Administration 2020, Postgraduate Diploma in Business Management (2017) and a Higher Certificate in Shipping and Transport Management (1990).