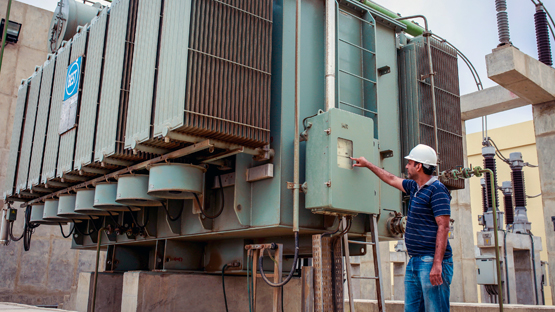 After a period of power generation surplus in the late 1990s, shortages emerged, and Pakistan struggled to supply reliable and affordable electricity to its fast-growing population of more than 200 million. Limited by fiscal constraints, the country made no public investment in additional capacity between 2000 and 2008, while private projects were procured selectively. Frequent blackouts also severely impeded economic development and job creation. While the government established a sound policy framework for private investments in generation, including in renewables, the power sector remained uncompetitive because it was held back by insufficient transmission and distribution investments, high costs, and inefficiencies that exacerbated revenue shortfalls.

The Bank Group launched a closely coordinated Transformational Energy Initiative in 2014 to mobilize investments of $10 billion. The initiative aimed to expand incremental generation capacity with both private and public investments, lower the cost of energy, and improve sector efficiency through reforms. In parallel, the Pakistani government coordinated sector sustainability efforts with the Asian Development Bank (ADB) and the Japan International Cooperation Agency (JICA). It also set up the China-Pakistan Economic Corridor to increase investments in power generation and transmission.

Since 2006, the Bank Group has supported Pakistan with policy reforms in the power sector. In 2014, it focused on improving the sector’s financial and operational performance to reduce its dependence on public funding, enhance transparency, and build credibility with investors. The Bank Group also helped expand the availability of natural gas. These efforts led to sharper targeting of subsidies to the poorest, more effective initiatives for tariff policy, and the creation of a new market mechanism for purchasing power from generators.

Support for these programs was provided through two World Bank development policy credits of $600 million in 2014 with parallel financing from ADB and JICA, and $500 million in 2015. IFC supported these reforms by managing coordination between the government, regulator, and private investors to facilitate private investments.

Mobilizing Public and Private Financing to Build Up Power Capacity

From 2014 to 2017, the World Bank provided close to $3 billion in financing and partial risk guarantees for public hydropower and transmission projects. The $4.3 billion Dasu hydropower project (2,160 megawatts) received an IDA credit of $588 million and partial credit guarantee of $460 million, which mobilized $1.85 billion from local and international private banks. This included a 10-year, $350 million loan that the government obtained using $210 million of IDA’s partial credit guarantee, extending the tenor significantly and achieving cost savings.

Another project, the Tarbela fifth extension, received World Bank financing of $390 million. Together with the fourth extension that had received public financing of $840 million in 2012, these projects significantly expanded the country’s renewable hydropower generation capacity (close to 3,000 MW) during the high-demand summer season. The Asian Infrastructure Investment Bank provided $300 million in co-financing for the fifth extension. To enable new power generation to reach consumers, the World Bank-financed $425 million for the National Transmission Modernization Project would improve the capacity, reliability, and business processes of the national transmission system and its operator.

Since the start of Pakistan’s private power market in the late 1990s, IFC has made direct investments of over $850 million in 19 projects to increase the generation capacity by around 6,500 MW, attracting private investment of over $11 billion. IFC’s investments in the sector have mobilized additional funds from the ADB; the Islamic Development Bank; the development finance institutions of France, Germany, the Netherlands, and the United States; and others.

MIGA worked closely with IFC as part of the energy initiative and provided $83 million in risk coverage for the equity investors of an IFC-financed hydro project. Earlier, in 2012, MIGA had provided a $148.5 million guarantee for another hydro project.

Beyond 2017, the Bank Group pipeline includes the $100 million Sindh Solar Energy Project to support further private investment in utility-scale and off-grid solar; the second stage of the Dasu Hydropower project (2,160 MW); and over $750 million of potential IFC financing to support private renewable projects.

Collaboration between the Pakistani government and the Bank Group for the country’s energy sector has significantly increased access to electricity and power generation, including in renewable energy. It has lowered the cost of generation to less than 10 cents per kilowatt and reduced power subsidies. It has facilitated growth of a vibrant market for independent power producers, with over 10 GW of operational projects that have attracted $20 billion of private investments.

The Bank Group’s combined investments in the power sector since 2014 have contributed to over 6,000 MW in incremental generation capacity with a direct investment of over $4 billion and mobilization of $6 billion from other international finance institutions, commercial banks, and the private sector.

The World Bank provided development policy credits of $600 million in 2014 and $500 million in 2015 for energy policy reforms. An IDA credit of $588 million and partial guarantee of $460 million mobilized $1.85 billion for the Dasu hydropower plant.

IFC invested $755 million (including funds mobilized from other development partners) in two hydro and four wind projects and a liquefied natural gas terminal, as well as $125 million to set up a renewable energy development platform. These investments facilitated private investments of over $4 billion.