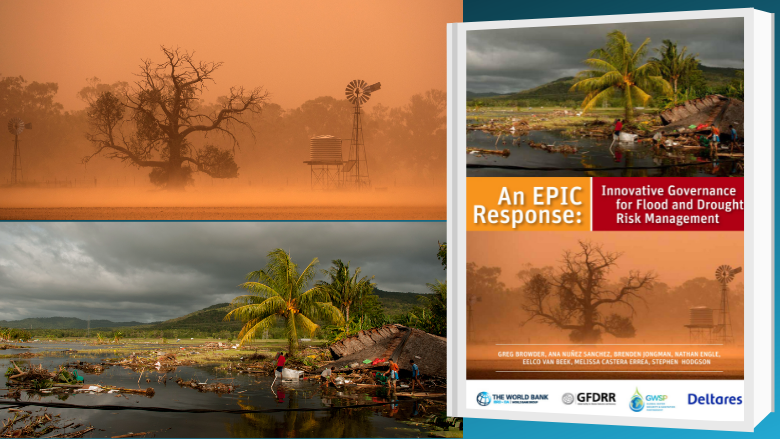 Hydro-climatic hazards don’t need to become disasters: Hydro-climatology looks at the interaction between weather, watersheds, and water. Hydro-climatic extremes, such as periods of abnormal dryness or wetness, are natural hazards and are increasing in a warming world. Whether a hydro-climatic hazard results in a flood or drought disaster depends on how society manages these risks.

Flood and drought disasters impose a huge toll: Over the last two decades, at least 1.65 billion people have been affected by floods and 1.43 billion by droughts. The economic costs have been staggering, and the social costs even higher as the poor and marginalized are disproportionately affected. Hydro-climatic disasters can have intergenerational poverty impacts, spur migration, and contribute to geopolitical instability.

Some progress has been made but we have not yet come to terms with enormity of the challenge: Over the last few decades, many countries have made significant improvements in managing hydro-climatic risks, supported by international initiatives such as the Sendai Framework for Disaster Risk Reduction, the Paris Climate Agreement, and the Sustainable Development Goals. But those are not enough, and we are falling behind. National governments often deal with floods and droughts in a siloed manner, without fully encompassing the complexity and interlinkages between these two types of hazards.

A new perspective, referred to as an "EPIC Response," is offered to better manage hydro-climatic risks: This perspective looks at floods and droughts not as independent events but rather as different ends of the same hydro-climatic spectrum that are inextricably linked. It provides a comprehensive framework to help national governments lead a whole-of-society effort to manage these risks. The term EPIC Response is a mnemonic for remembering the key elements of this perspective, as shown in the accompanying graphic—it also connotes the level of effort that is required. 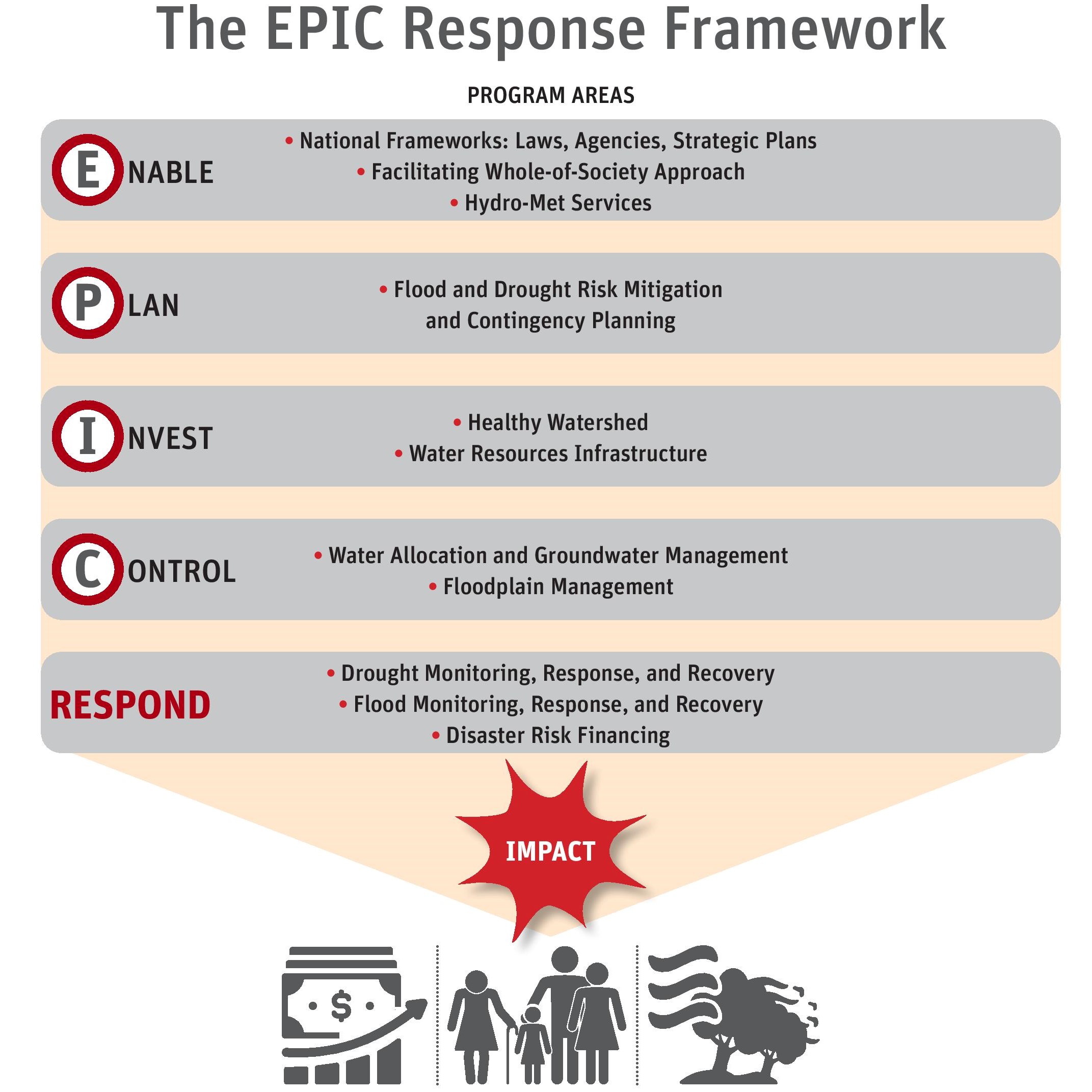 An EPIC Response Framework shows how national governments can holistically manage floods and droughts: There are twelve fundamental building blocks to an EPIC Response, as explained in the report. The report also describes another 40 distinct programs managed by a variety of national agencies. These different programs interact in complex ways, but generally in a downward cascading manner that ultimately determines to what extent hydro-climatic hazards result in disasters.

National agencies must fulfill their specific mandates but also need to collaborate to achieve an EPIC Response: If national agencies are not performing well or if interagency collaboration is weak, then there will be significant gaps in a country’s efforts to reduce hydro-climatic risks. An EPIC Response seeks to address these issues with the aim of efficiently reducing the economic, social, and environmental costs of floods and droughts. 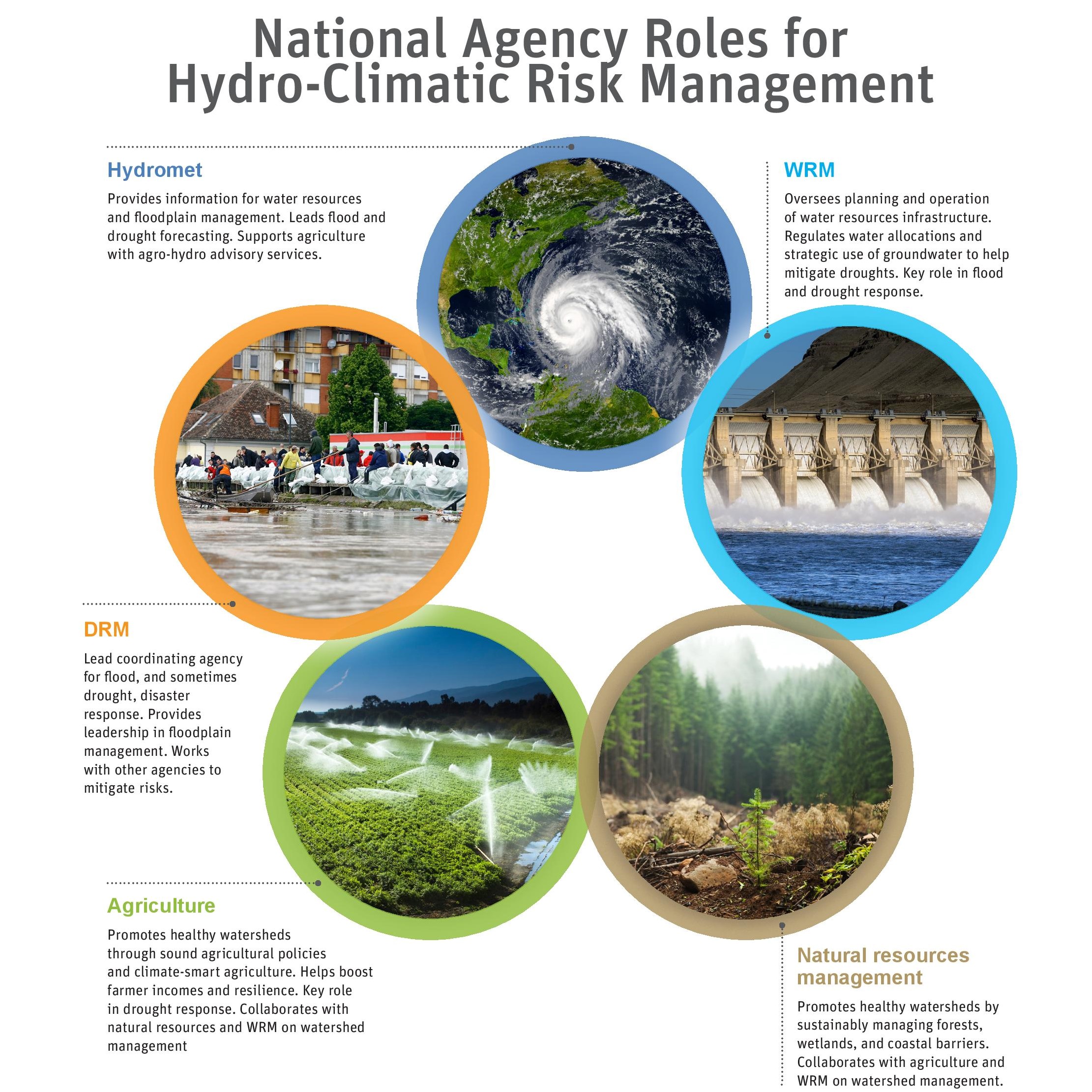 An EPIC Response is a whole-of-society effort: National governments must lead a whole-of-society effort to manage hydro-climatic risks. Sub-national governments are the indispensable associates of national agencies in this endeavor. Agencies need to engage with businesses, civil society, and households—and focus on poor and marginalized groups—to ensure effective programs. They need to prioritize education and risk communication, tap into the expertise of the research community, and ensure open access to data and information.

Developing an EPIC Response is an evolutionary process: The ability of a country to mount an EPIC Response depends on many factors, including its overall level of economic development and quality of governance. The report helps countries improve their responses by providing a template to gauge the effectiveness of their programs. The challenge is urgent because a country’s EPIC Response needs to evolve rapidly to stay ahead of a changing climate.

National strategic planning is a key tool for accelerating the evolution of an EPIC Response: Governments should periodically, approximately every five years, develop interlocking national strategic plans for water, disaster risk management, and drought. They need to continuously strive to improve program performance through rigorous monitoring, evaluation, and adjustments. National climate adaptation plans can also be guided by the EPIC Response Framework.

Floods and Droughts: An EPIC Response to These Hazards in the Era of Climate Change