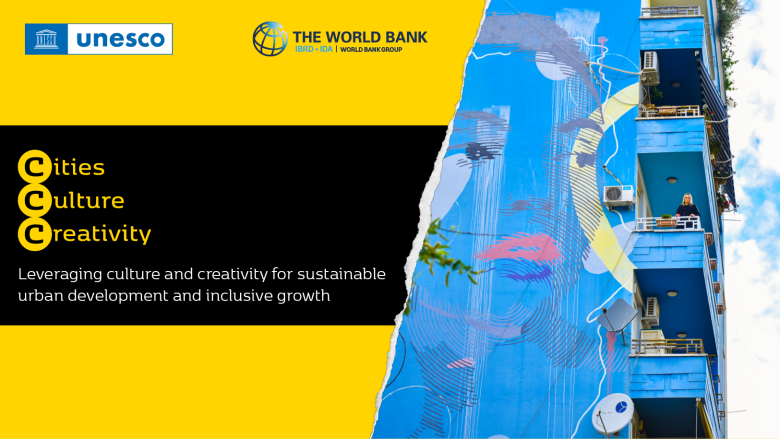 Capitals of Creative Industry – How They Take Shape, Inspire & Endure

What would Mumbai be without Bollywood? Bangkok without its temples? How would we know Beirut without its za’atar, hummus and kibbe? Or Kingston without reggae?

and harness human and technological resources to bring people from varied backgrounds together and pave the way for economic and social gains—although COVID-19 has, for now, weakened these impacts.

As countries contend with the climate crisis, COVID-19 and a sustainable and resilient recovery from it, .

A new World Bank–UNESCO report—Cities, Culture, Creativity: Leveraging Culture & Creativity for Sustainable Urban Development & Inclusive Growth —explores how cities across Asia, Africa, Latin America, Eastern Europe, the Middle East and elsewhere have benefited from and enabled culture and creativity. According to the report, the revenues of cultural and creative industries[1] were estimated at $2.25 trillion in 2013 - or 3 percent of global GDP.

The ways urban centers prepare to become cultural and creative ecosystems and destinations are fundamental to their success. This report suggests a framework for embracing cities’ possibilities as cultural and creative hubs and includes six considerations that can help cities tackle the challenges in becoming creative centers. 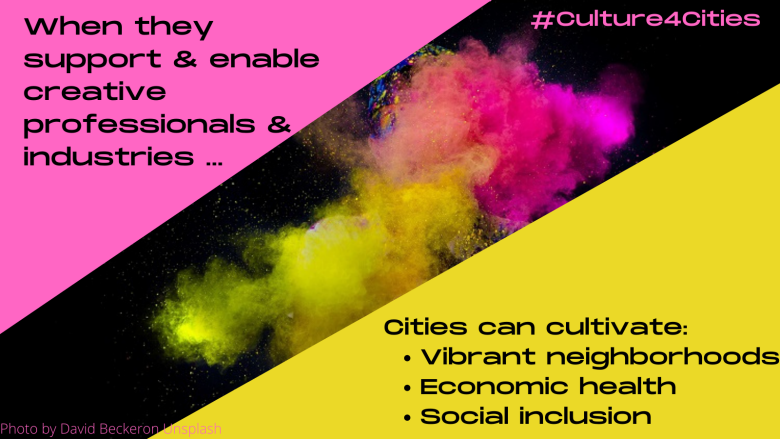 By learning how cities and towns have enabled creativity or leveraged culture, stakeholders across emerging economies can avoid pitfalls and focus on benefits. The report’s case studies include the following:

Lima, Peru – A group of chefs saw the commercial and creative potential in Peruvian cuisine to resolve social and economic strife in Lima. They launched many projects in partnership with national and local governments. The projects’ success motivated the city to launch the ‘Cocina de Ideas’ (Kitchen of Ideas) to train restauranteurs, while reaching out to include the poor and marginalized residents of the city in their efforts. Lima’s gastronomic industry now represents about 11.2% of Peru’s economy.

Kobe and Kyoto, Japan – After suffering a massive earthquake in 1995, Kobe had to rebuild its economic and cultural foundation. Its history of tolerance as the first open port in Japan during the 19th century informed an inclusive approach to its renewal. In Kyoto, city planners led urban renewal by inviting creative ideas for technology-enabled art and entrepreneurship. Inspired by the city’s 1,200-year history as Japan’s ancient capital, entrepreneurs and artists gather in city-sponsored creative spaces. Now 16–18% of all private enterprises in Kyoto are in creative fields.

Seoul, South Korea – The city is leveraging the Hallyu, or “Korean Wave,” phenomenon—the worldwide popularity of Korean culture, from K-pop and K-dramas to online games and Korean cuisine. Seoul built a Digital Media City (DMC), a high-end Media & Entertainment and IT Industrial Cluster on a former landfill. In Seoul’s Urban Regeneration Center, residents can now plan, design and implement their own neighborhood renewal projects.

Madaba, Jordan – After archaeologists unearthed ancient mosaics in Madaba, Jordan, in the 20th century, the city started using mosaics to beautify urban spaces. The government also funded education and training for craftspeople. Now the “City of Mosaics” partly supports itself through tourism.

Brazzaville, Republic of the Congo – The government of the Congolese capital city built event spaces for musicians to perform their renowned, traditional music. By providing instruments and residences for them, the city professionalized and began monetizing its musical heritage. Concerts have become a draw for tourists and identify the city with the wider Pan-African musical network.

Belgrade, Serbia – The artistic and creative community led efforts to renovate unused buildings to establish cultural districts in Savamala, the Belgrade Design District (Choomich), Cetinjska Street and Dorćol Platz. But without government planning and support, Savamala was marketed to private investors, resulting in rapid gentrification and making it unaffordable for many creative professionals.

Angoulême, France – This town in Western France developed into a center for comic-book creators and afficionados. Emerging out of its paper-manufacturing and literary heritage, dating back to the 16th century, the comic-book capital is home to 200 authors and artists. The city created the Ligue des Auteurs Professionnels as an economic safety net for creatives.

This report is the second in a collaborative series between the World Bank and UNESCO. The first report “Culture Is Key to ‘Building Cities Back Better’” and related materials can be found here:  https://www.worldbank.org/en/news/press-release/2019/03/04/culture-is-key-to-building-cities-back-better].

[1] “Cultural and creative industries” for this paper include audiovisual and interactive media; literature and the press; performing arts; visual arts and crafts; intangible cultural heritage; design and creative services; and heritage and tourism activities.