This is note #24 in the Connections series. You can download the PDF version of this note through this link. 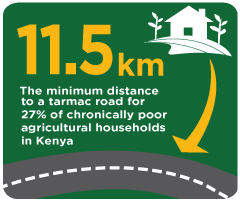 Transport plays a crucial role in connecting people to goods and services and fostering sustainable development. The literature links improved transport infrastructure to economic growth and poverty reduction through five key mechanisms (1) reducing transport and production costs, (2) creating jobs, (3) expanding productive capacity, (4) improving access to markets and basic services like health and education, and (5) reducing prices of final goods and services. These benefits depend on supportive conditions in other sectors, such as access to credit, functioning land markets, low trade barriers, and so on. Therefore, any assessment of potential gains from transport infrastructure and services should also account for the interaction with complementary markets. However, the analysis of such interactions—assessing how and when transport infrastructure can help reduce poverty and income inequality—is largely missing from the literature, leaving significant knowledge gaps across the spectrum of transportation settings. This note highlights existing findings and some limitations in the literature on three basic types of transport infrastructure: large projects such as regional or national highways and railroads; rural transport; and transport in urban areas.

Improving connectivity between and within countries can
bridge stark differences in economic development by strengthening interregional
trade. For example, five coastal countries in Africa—Angola, Kenya, Nigeria,
South Africa, and Sudan—account for more than 70% of Africa’s GDP. But in
sub-Saharan Africa overall, estimates suggest that tightening the connectivity
between cities by upgrading the primary road network can catalyze trade worth
hundreds of billions of dollars.

In Peru, intercity highway upgrades increased the average
annual rates of growth for exports (by 6%) and employment (by 5%). In China,
connecting cities with railroads has moderately increased county-level GDP per
capita, and in India, colonial railways boosted interregional trade and raised
real income levels.

Improvements in transport infrastructure can also enhance
firm efficiency and affect firm location. Upgrading highway infrastructure has
allowed Indian firms to hold inventory for shorter durations, increased the
survival rate of existing firms, and induced new firms to open near upgraded
highways. In Indonesia, expressways have been associated with the dispersion of
manufacturing activities.

Transport can play a crucial role in enhancing food security
and agricultural productivity. For example, Africa could become self-sufficient
in food and create a regional food market worth $1 trillion by 2030. But
farmers will need better access to roads to trade their products. Africa’s
current food insufficiency is not surprising given the deficiencies in its road
infrastructure—the average road density in low-income countries in sub-Saharan
Africa is less than one-third that in other low-income countries. Improving
rural road connectivity has been shown to increase agricultural productivity by
reducing the travel time to agricultural markets, inducing farmers to adopt
modern farming techniques and favor cash crops, and raising market
participation. Improving road quality has also been shown to induce migration
and shift workers from agriculture to manufacturing.

Research shows that reducing rural isolation—by lowering
transportation costs and travel times or improving road access and proximity to
markets— may have multiple benefits. It is associated with a reduced likelihood
of a household’s facing multidimensional poverty, with increased school
enrollment rates for boys and girls and disadvantaged groups, and with greater
use of distant hospitals.

The placement of transport infrastructure within a city can
alter the production mix of the urban economy, affect employment opportunities
for the poor, and alter crime rates. For example, evidence suggests that the
development of city roads in Colombia has shifted economic activity toward the
production of lighter tradable goods. Similarly, transport infrastructure has
altered the economic landscape of Chinese cities—radial highways have
decentralized the services sector, radial railroads have decentralized the
industrial sector, and ring roads have decentralized both sectors.

The urban poor rely heavily on public transportation for
commuting. Without fast, secure, and affordable mass transportation, the urban
poor are typically forced to walk to work, which is time consuming and limits
their job search radius. Thus, the geographic dispersal of the labor market can
dampen the gains from industrial agglomeration. A lack of security in the
public transit system may also limit the labor market participation and job
search radius of the poor, particularly for women, who are especially dependent
on public transport. Even a simple intervention can make a difference: improving
nighttime lighting reduced the incidence of crime around bus rapid transit
stops in Colombia.

Documenting the Poverty Dimension of Transport: A Long Way to Go

Documenting the link between transport interventions and the
various dimensions of poverty and income inequality will require much more
systematic attention from research. To date there is only limited evidence on
the direct impact of transport infrastructure on poverty and income inequality.
(1) For national transport infrastructure, improving interregional connectivity
can enhance welfare by insuring farmers against bad weather. (2) Regarding
rural settings, improvements in transport in Vietnam and Madagascar were most
beneficial for the least developed and remotest areas. In contrast, in rural
Nepal, easier access to roads appears to have benefited poor households but did
not reduce income inequality. In rural Bangladesh, middle-income households
benefited the most from investments in roads. (3) The impact of urban transport
projects on the welfare of the poor is largely undocumented in the research.

[1] This note draws on the works listed under furtherreading. The author is grateful for helpful comments from Karla Carvajal,Carlos Castelan, Matias Dappe, Steven Farji, Somik Lall, Harris Selod, NancyVandyke, and Tara Vishwanath and other reviewers in the World Bank’sDevelopment Economics Group, in the Poverty Global Practice, and in theTransport and ICT Global Practice.