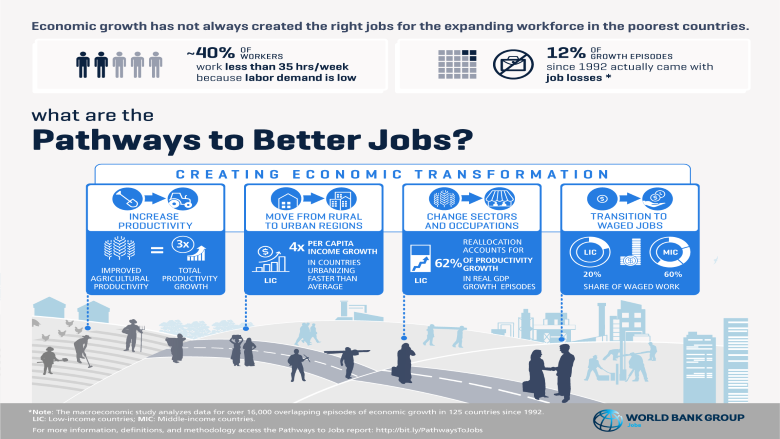 The report identifies jobs-related transitions and pathways people follow to better jobs —workers increase their hours worked, become more productive, move between locations, change sectors and occupations, and shift from self- to waged employment and from less to more successful firms.

Economic growth has not always created the right number and distribution of jobs for the expanding workforce in International Development Association (IDA) countries -the world's poorest countries.There is no guarantee that economic growth will be labor intensive, nor that productivity gains will be shared by all workers. What drives GDP growth is productivity growth. Growth can be more inclusive when it is labor intensive, so more workers experience gains in their productivity by moving to better jobs.

The gains in economic transformation in low- and lower-middle-income countries are limited by the prevalence of low-productivity self-employed and service activities. During the growth episodes in low-income countries analyzed for this report, more workers typically moved into services than into industry.

Public sector waged employment in low- and lower-middle-income countries is a significant share of total waged employment. Public sector waged workers account for about 40 percent of waged work on average (45 percent in low-income countries). Since most waged jobs in the public sector are teachers, nurses, police, and soldiers, these jobs provide careers and social mobility for many members of society and are important jobs in development.