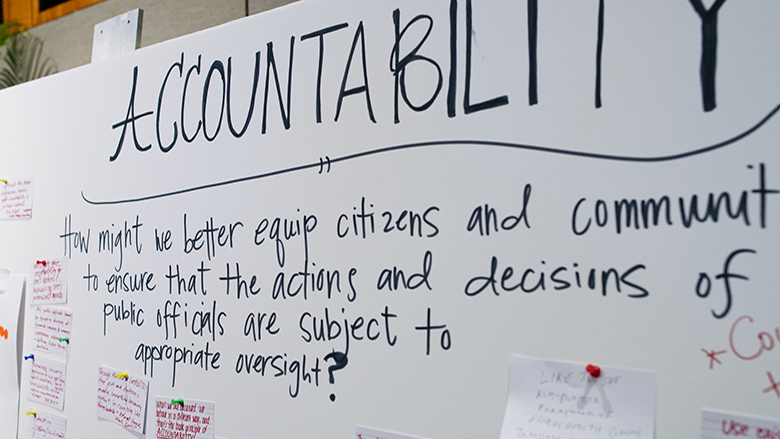 The concept of digital government represents a fundamental shift in the way governments around the world are embracing their mission. From setting measurable administrative goals to improving public service delivery, from making data-driven decisions to enacting evidence-based policies, from ensuring greater accountability and transparency within government to building greater public trust, governments are leveraging the power of information technologies in transformative ways.

We believe that future government services will have three broad characteristics (the 3 C’s):

As the provision of public services gets increasingly data-driven, governments can garner a granular understanding of the changes in the needs of citizens, allowing for a highly individualized and targeted delivery of services. This is made possible by digital tools that establish a direct communication channel to every citizen, allowing governments to uniquely address each citizen’s needs, and develop tailored plans for communities and regions. Thus, services to citizens will constantly morph and become available depending on individual constraints.

Imagine a version of "Government Now" modelled on the pattern of Google Now. For example, the services provided to an individual following loss of employment may require a deep understanding of the individual’s skills, endowments, financial condition, and health conditions in order to provide customized support. Similarly, the system can evolve over time into a highly adaptive tool used to raise supportive resources, giving a new meaning to "from each according to his ability, to each according to his need."

This can have radical implications in how governments carry out their core duties in the future. Take taxation, a major source of government revenue, for example.

In a digital model, the systems of taxation would seamlessly adapt to situational changes in real time based on collective data for individual movements in the workforce and changes in income as opposed to the manual and institutional inputs of these changes. These real-time adjustments could be calculated and implemented using an automated and adaptive policy instrument. With ever-increasing input data, such a digital instrument may also be able to convert taxes in a given sector into subsidies or negative taxes depending on the evolving economic situation of an individual, household or business entity.

We can see a glimmer of this reality from the congestion pricing approaches introduced by some city governments to regulate traffic, whereby the toll rate is sensitive to the current time, the distance travelled, and the location of a given driver.

It will not be possible to provide contextual services without data being open and interoperable. The use of open application program interfaces (APIs) to enable easy access to different data repositories would, for instance, allow a deeper and richer understanding of the individual context. In the previous example of a person losing his job, a contextualized response would require integration of data from diverse sources – in this case, educational data (from academic systems), skills data (from corporate HR), financial data (from banking, employer and tax systems), and health data (from health care providers), besides integrating this data with data on proximate skills in high demand, job openings and social welfare payments.

The systems and processes behind a digital government need to be well-aligned with each other to allow for the development of an integrated platform for public services – one that minimizes duplication amongst various government departments and encourages the sharing of capabilities across sectors. This requires governments to adopt common standards and architectures in the implementation of their digitization agendas.

A coordinated approach whereby Open Data assets available for use within agencies, between agencies, in the private sector, or by citizens all follow the same standards would also bypass the need for citizens to provide personal information for each government transaction separately.

In the future, intergovernmental digital services involving effective cross-border integration are also likely to gain greater prominence. Instances of such cooperation can be seen in the Asia/Pacific and Japan (APJ) region, where countries including Australia, New Zealand and Japan are increasing intra-region integration of the public cloud infrastructure amongst other digital services. Similarly, as the European Union (EU) embarks on its own electronic identification and trust services (eIDAS) initiative to establish new e-relations across borders for its citizens, it also engaging with partners across region with initiatives such as the EU-Japan 5G mobile technology collaboration, and the EU-US Trillium Bridge project, which aims to bridge electronic health records between the EU and the US by establishing an interoperability standard.

Many tasks previously thought to be solely in the realm of human intelligence, are being increasingly delegated to automated machines. In addition to increasing automation of physical labor, we are seeing rapid improvements in artificial intelligence with machines being able to assess, understand and respond to human behavior.

For example, Ellie – a virtual psychologist – can process a patient’s every word, analyze their emotional state and recommend appropriate treatment, successfully maintaining greater openness and confidentiality than a human therapist. The US Department of Veteran Affairs is exploring the use of virtual therapy with Ellie as a way of abolishing the stigma around therapy and helping clinicians with decision support.

Moreover, IBM’s Watson supercomputer is undergoing tests to help physicians make complex decisions by highlighting clinical nuances that they might miss when unassisted. Today, intelligent virtual assistants – IPsoft’s Amelia, Amazon’s Alexa, Microsoft’s Cortana, and Apple’s Siri, among others – are able to provide user-sensitive responses to individual queries. These developments can be exploited to provide a higher level of cognitive understanding of citizen needs. Making a 311 call might be a very different experience going forward.

Eventually, with systems that can build associations, learn from experience and draw conclusions, we may be approaching a future model of government whereby cognitive machines make optimal decisions to automatically determine effective policies and avoid wasteful programs. Our fascination with understanding cognitive processes is exemplified by the European Commission’s funding for the Human Brain Simulation Project, which is attempting to emulate a model for the human brain by 2023.

A well-suited digital infrastructure can improve the functions of governments at various scales – national, regional and local. Data will be central in enabling digital development, for instance making use of contextual data indicators can allow governments to gain a more acute understanding of local issues and accurately gauge public concerns.

Additionally, using crowdsourcing and analytics, governments can gain volumes of feedback on the issues requiring their action. In Uganda, leaders can identify trending concerns or urgent matters and immediately take action where needed using data gathered by IBM text analytics and machine learning. This social engagement tool provided by a UNICEF-IBM collaboration allows Ugandan youth to communicate with their government and community leaders on issues affecting their lives.

Data pervasiveness can lead governments to better direct their development and sustainability efforts to improve living conditions, streamline service delivery and address key development challenges such as minimizing the spread of disease and tackling climate change with technology-enabled solutions as nations transcend into a global knowledge economy. But while data plays a central role in a digital government framework, present-day data has the propensity to be unreliable and suffer from gaps.

As the UN Data Revolution report puts it, “too many countries still have poor data, data arrives too late and too many issues are still barely covered by existing data.” To overcome this challenge and gain a contextual understanding of issues, governments need to make data more pervasive and granular by implementing a coordinated approach across sectors involving increasingly regular data collection, publishing and encouraging the use of open public data, and delivering services using open APIs.

This transition requires governments to adopt common standards, pass data protection and privacy laws, and implement effective cybersecurity mechanisms as they undergo increasing digitization. Governments would also need to implement policies to increase data literacy, boost partnerships (globally and between agencies at home), and adapt to the technology-based restructuring of the labor market to ensure the relevancy of its institutions and the continued functioning of the digital economy.

The digital revolution is delivering an unprecedented set of tools for bolstering economic growth and productivity, generating wealth even in resource-constrained settings, and improving living conditions for all. Great leaps in various sectors – health care, transportation, energy and safety to name a few – are all possible with simple, and robust bottom-up models that employ data and digital infrastructure to enhance inclusiveness and end extreme poverty.

But we can only create a society of shared prosperity if governments update their policies and institutions to address the challenges and seize the opportunities brought about by these tools.