Harnessing the Internet for Development

This is note #30 in the Connections series. 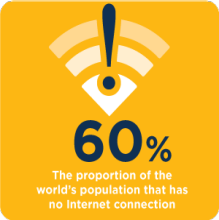 Universal access to the Internet has become a top development priority. Getting there requires affordable, reliable access to fast, “always on” broadband networks, one of the United Nations’ Sustainable Development Goals (SDG 9.c). Finland has recognized access to broadband as a fundamental human right since 2010.[1] In 2011, a key UN commission also declared that broadband access is a basic human right, along with health care, shelter, and food.[2] Affordable Internet access enables progress on some of the toughest development challenges in the world’s poorest communities. According to one estimate, increasing the proportion of the world’s population that is connected to the Internet to 75% ( reaching 5.6 billion people) would add $2 trillion per year to world GDP and help create 140 million jobs—a lofty goal: today, only about 40% of the world’s population (3.2 billion) is connected.[3] But reaping those benefits requires more than adding Internet connections: while digital technologies have been spreading, “digital dividends” have not. Getting traction will require a major reevaluation of Internet development and reform projects. That reevaluation is the focus of the World Bank’s World Development Report 2016: Digital Dividends (WDR 16). It highlights the size of the digital divide and shows that a robust program of development in the supporting environment points the way for the development community to make decisive headway on the enormous promise of the Internet.

Rethinking Development in Light of the Digital Divide

Affordable broadband Internet can help overcome remoteness, provides global and local news and educational resources, and disseminates transit information, health data, and disaster alerts. It can empower women and other vulnerable populations, generate consumer benefits, raise the level of government transparency and effectiveness, and boost capacity in virtually every social and economic endeavor.

Although difficult to measure at an aggregate level, the business impact of the Internet is more evident when analyzing smaller firms participating in global trade through Internet-based sales and investments. In Vietnam, the average total factor productivity reported by firms using e-commerce was 3.6% higher than firms that did not use the Internet.

The job spillovers created by digital technologies are important. In the United States, every high-tech job creates 4.9 additional jobs in other sectors. In Kenya, 80,000 agent positions were created to manage M-pesa’s financial services nationwide.

But as shown by WDR 16, the relationship between Internet access and growth is not absolute. Digital dividends depend on key “analog complements” needed for digital networks to succeed, including appropriate policies and regulatory frameworks, competition, accommodating bureaucratic processes for start-ups, and strong and inclusive education. For example, besides basic literacy for all children, teaching technical skills early and exposing children to technology promotes ICT literacy and influences career choices. Ensuring girls and young women are included in technical training is critical to ensure an inclusive information society and to mitigate the gender digital divide.

Thus, WDR 16 recommends a dual approach to Internet development: (1) investing in broadband infrastructure to make the Internet universally accessible and (2) strengthening the analog complements to leverage the opportunities offered by the Internet for economic and social development.

WDR 16 recommends ways to embed lessons learned in lending and technical assistance programs of the World Bank and its development partners. It argues that digital development strategies need to be big and bold if they are to go beyond connectivity alone and strengthen the analog foundations of the digital revolution.

The Outlook for Closing the Digital Divide

The question is, how can these ICT investments become truly transformational in terms of transparency, accountability, and quality of service? A UN survey indicates that countries that have received ICT advice from the World Bank Group show encouraging progress in digital adoption.[4] But there is no magic bullet.

In support of WDR 16, the World Bank’s Transport and ICT Global Practice is providing a platform for financing digital innovation and development through its Digital Development Partnership (DDP), underpinned by a multidonor trust fund. The DDP will be a critical facility for country and sector diagnostics as well as for creative action plans to transcend business as usual in the development agenda. It will bring together experts from many ancillary disciplines in pursuit of the WDR 16 recommendations for strengthening analog complements.

The Impact of WDR 16

What do we hope to see and plan to do in the wake of WDR 16? We expect to see a large increase in demand for investment and technical support and, yes, in expectations. To advance the transformational promise of the Internet, we plan to strengthen collaboration across disciplines, scientific yet pragmatic delivery, and knowledge sharing on solutions, and monitoring and evaluation. The World Bank Group and its DDP plan to play a critical role in inclusive digital development for years to come.

[2] “Report of the Special Rapporteur on the Promotion and Protection of the Right to Freedom of Opinion and Expression, Frank La Rue,” May 11, 2011, Human Rights Council, United Nations, A/HRC/17/27. See also