The Locust Crisis and the World Bank Group 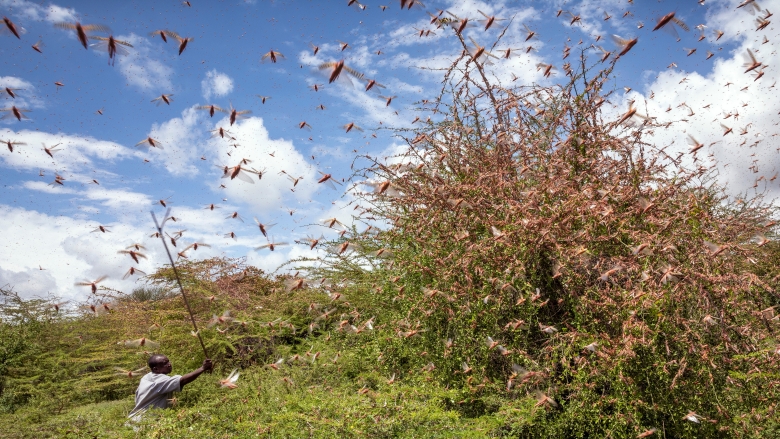 Locust swarms, are ravaging crops and pastureland, destroying food and vegetation and jeopardizing food security across Africa, the Arabian Peninsula, and parts of South Asia.

The world’s most destructive migratory pest, locusts can travel up to 90 miles a day, form 80 million-strong swarms and eat the same amount of food per day as 35,000 people. Larger swarms, like one seen in Kenya in late January 2020, can consume as much as 1.8 million metric tons of green vegetation every day, enough food to feed 81 million people.

Decimated crops and pasture mean that food security and livelihoods for millions of people—especially in countries marked by Fragility, Conflict and Violence (FCV)--are at stake. The Horn of Africa, which already has 22 million severely food insecure people and over 12 million internally displaced, is facing a critical food security emergency unless urgent action is taken to control the locust population.

Without action, the locust population could grow 400 times larger by June 2020 and spread to new areas, disrupting food supply, upending livelihoods and requiring substantial resources to address. WFP estimates that long-term response and recovery costs could top US$1billion if swarm growth is not controlled. The World Bank estimates that in Africa alone, more than 90 million hectares of cropland and pasture are at risk and damages and losses could amount to as much as US$9 billion in coming years.

The economic, human, and environmental impacts of the current locust plague are substantial and could last generations. When affected households and families struggle to meet basic needs such as food and shelter, nutrition, health care, and education may be neglected, hindering long-term health and development, especially of children. Studies of past locust plagues found a notable decrease in school enrollment in affected areas as well as evidence of stunting in infants and children.

How the World Bank Group is helping countries

The aim of the Bank Group’s response is to provide immediate and longer-term support that prioritizes helping affected households and communities safeguard their assets and cope with the economic impacts of locust damage ,as well as strengthen national systems for preparedness.

Support will focus on three areas: