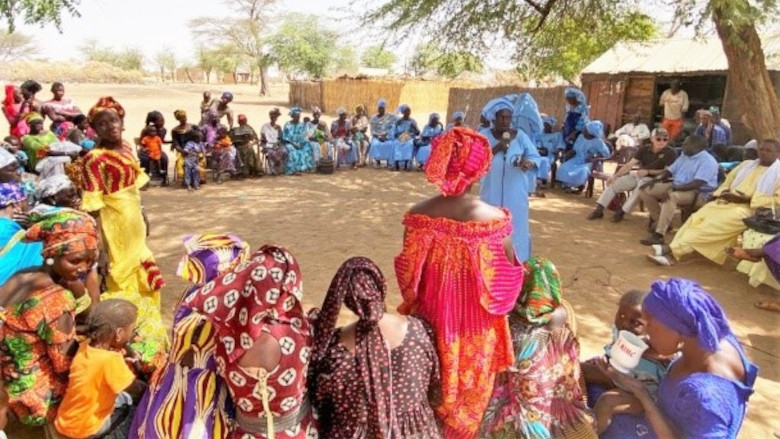 Empowering women at the community level in Senegal’s nutritionally lagging regions helped improve child nutrition through better infant and young child feeding and caring practices. Initial results from this new approach of empowering women to enhance nutritional outcomes began in earnest in 2017/18. The results show that by 2021 the majority of women’s groups (64 percent) actively engaged in nutritional activities, including active screening for acute malnutrition, the management of child grain banks to ensure that no child goes hungry at any time of the year, monthly growth monitoring, and home visits. Also, 40 percent of households now grow Moringa, a draught-resistant tree that produces highly nutritious leaves. In addition, 22 percent of households have installed hand washing devices using appropriate technology, facilitating better child health and hygiene.

For more than a decade, communities in Senegal (with a population of 17.4 million people, of which 8.8 million are female) have had to deal with major successive shocks, including a series of droughts. These shocks have impacted local economies and forced households to economize on essential things, such as health care and food consumption. Over time, this has led to stark disparities in nutritional improvements between regions of the country. Whereas  national stunting rates have remained stable at under 20 percent for about a decade, much of the central, northern, and eastern parts of the country — which typically suffer most from the food and nutrition insecurity shocks — continue to show high stunting rates. 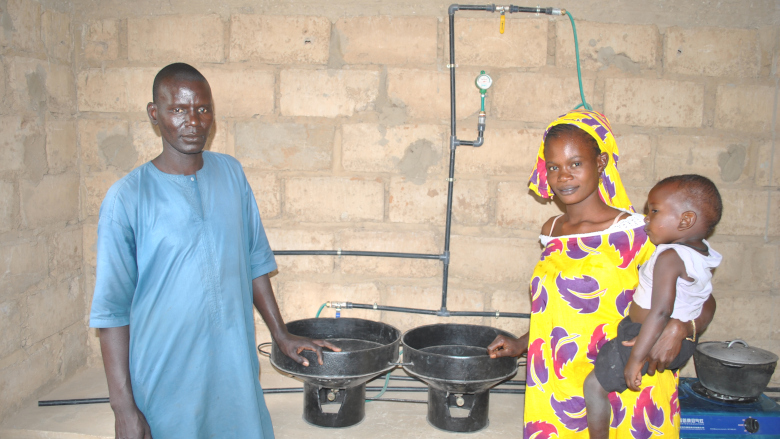 To improve the situation, the national Nutrition Enhancement Program, supported by the World Bank, needed to combat multiple barriers that women face in accessing nutrition and finances for their families. For example, these could include long distances to obtain essential health care; cultural gender norms requiring men’s approval to seek health care; a lack of formal identification documents or collateral to access microfinance; and widespread misinformation and taboos around childcare and feeding practices. Thus, empowering women in those lagging regions would eventually result in a decline in the stunting rates and an improvement in the overall local economic situation.

The National Council of Nutrition Development (CNDN), which oversees the implementation of the Nutrition Enhancement Program, took a multifaceted approach. Specifically, it sought to  put in place several innovative interventions to empower women in the areas characterized by a high prevalence of food insecurity and acute malnutrition in children under the age of five. Those interventions included the production and processing of agricultural and animal goods with high nutritional value; the economic management of new technologies; building community solidarity for access to production assets; providing health, nutrition, hygiene, and sanitation services; and the promotion of essential family health and nutrition practices. This new approach could succeed only if the empowerment of women is placed at the heart of the community mobilization strategy.  In addition, various stakeholders, including village leaders and local governments, would need to take ownership of the approach. 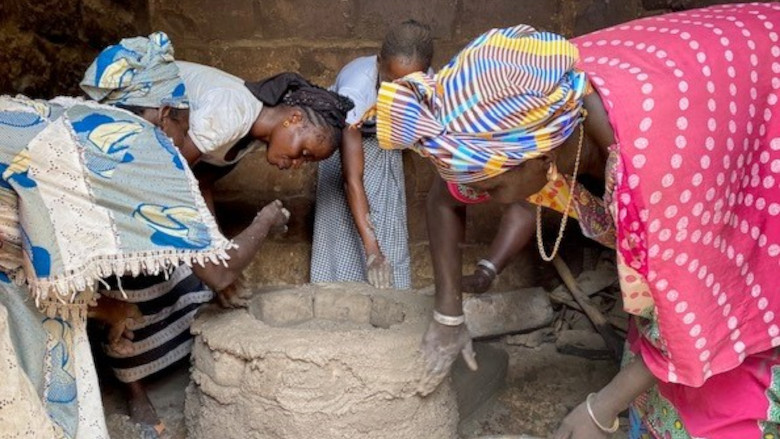 The new approach has been implemented in 25 communes (with a total population of 568,521, ranging from 6,414 to 52,205 per commune) between 2017 and 2021. It supported about 250 women leaders to advocate with local governments to prioritize and appropriate budgets  for nutritional improvements in local development planning. Some 125 women microentrepreneurs were equipped and financially supported by the community to conduct income-generating activities, selling hygiene products and making diversified and nutrient-rich products available and affordable throughout the year. About 5,000 women beneficiaries developed small animal (ruminant) and poultry farming, as well as backyard gardening. 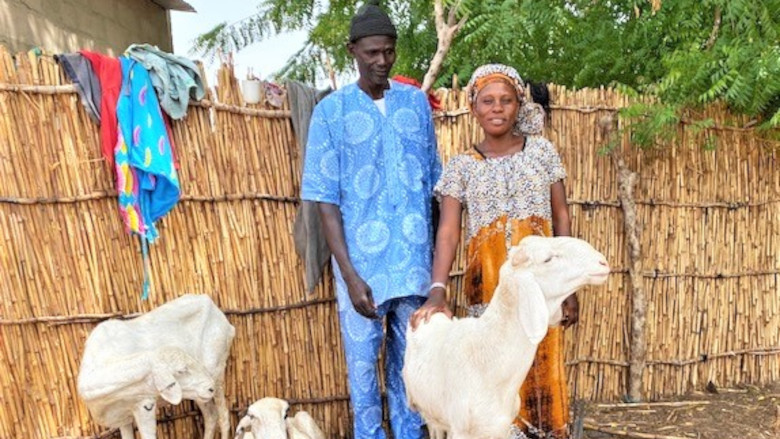 Beneficiary woman with her sheep that have helped her make the family less vulnerable to external shocks. ©Albert Yéra BOUBANE/CNDN

Communities also adopted good food, health and hygiene practices, for example, hand washing after toilet use and before cooking food, exclusive breastfeeding for the first six months, and frequent and diversified feeding of children over six months of age. In addition, communities used new technologies and learned techniques, such as the use of locally fabricated fuel efficient cooking stoves; improved poultry survival technology; the heat synchronization technique for small livestock (goats, sheep); the production of biogas for cooking and backyard gardening; synchronized chicken hatching; production of biofortified food items; child grain banks; and hand washing devices. Thus, these new tools were used to improve household food security, diversification and feeding practices of children aged 6 to 23 months, as well as pregnant and lactating women. Many groups benefited from improved nutrition services, including a total of 461,076 pregnant and lactating women,  adolescent girls, and children under the age of five. In addition, 102,480 women were empowered with new knowledge and skills to obtain sufficient quantities of food throughout the year. Additionally, vulnerable villages (based on acute malnutrition rates, recent occurrences of food insecurity shocks, and those located at least 10 kilometers away from any major road) were included in social safety nets, as well as into the development of nutrition-sensitive activities at the community level. 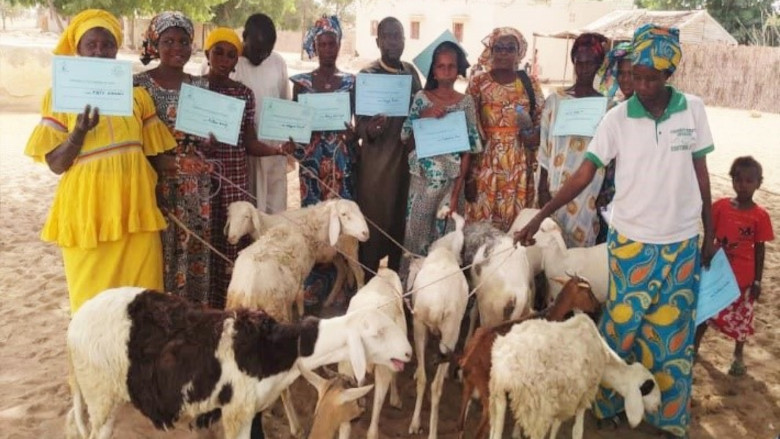 Beneficiary women having received sheep and are passing them on to neighbors as part of community solidarity. ©Albert Yéra BOUBANE/CNDN

With the arrival of the COVID-19 pandemic, women have confirmed their place and responsibility in the promotion of nutrition at the local level. For example, women leaders traveled to neighboring villages to promote preventive measures and support households in establishing 315 locally fabricated hand-washing devices (as compared to 175 devices that were initially planned; thus, this was an increase in response to the COVID-19 pandemic). Microentrepreneur women ensured that essential products, such as soap, bleach, masks and of course food were available during the curfew and absence of weekly markets. Women with income-generating activities were able to cover health and food expenditures and better withstand the pandemic.

These results and lessons are currently being replicated in other vulnerable communes in shock-prone regions under the National Nutrition Development Policy (2015-2025).

The Bank has been supporting the development and expansion of the Nutrition Enhancement Program since 2002. The WBG’s Independent Evaluation Group (IEG) recently evaluated more than a decade of support through consecutive projects. Their report confirmed (and even upgraded) the satisfactory and highly satisfactory ratings of the individual projects, as well as the strong reputation of the multisectoral program and its focus on delivering results.

The Bank continues to support the program through the Investing in the Early Years for Human Development Project (P161332), for $75 million, of which $35 million is for the Nutrition Enhancement Program. WBG support also includes the International Development Association (IDA) Investing in Maternal, Child and Adolescent Health Project (P162042) for $120 million, and the $10 million in trust funds from the Global Financing Facility for Women, Children and Adolescents. Finally,  an amount of $15 million  (from the $130 million dedicated to the Nutrition Enhancement Program),  will support the scaling up of the new approach of community dialogue and empowering of women to become local leaders, entrepreneurs, and effective care providers. As such, they will help to provide for optimal growth and development of their children through the introduction of new health and nutrition technologies, techniques, varieties and practices.

The development of the new approach benefited from contributions by a multitude of stakeholders, including community leaders, women's umbrella organizations, civil society organizations, local elected officials, sector-specific public service providers, as well as various development partners including the Spanish Agency for International Development Cooperation (AECID),  the United States Agency for International Development (USAID), and the World Bank-managed Japanese Social Development Fund (JSDF) (TF0A3526) for $2.8 million). These contributions were dedicated to searching for new and sustainable ways of enhancing local resilience to food and nutrition shocks.

Sectoral contributions are aligned with the National Strategy for Equity and Gender Equality (SNEEG) and Sectoral Nutrition Action Plans drawn up within the framework of the Multisectoral Strategic Plan for Nutrition (PSMN). Implementation is coordinated and monitored by the CNDN.

Looking To the Future

The tools, approaches and lessons learned are currently being replicated nationwide through the Bank’s $75 million Senegal Investing in the Early Years for Human Development Project, half of which is dedicated to supporting better child nutrition.  This is in addition to the yearly allocations under the national budget.  Using this new approach, Senegal aims to bring stunting rates down to below 15 percent by 2025, and below 10 percent by 2030. 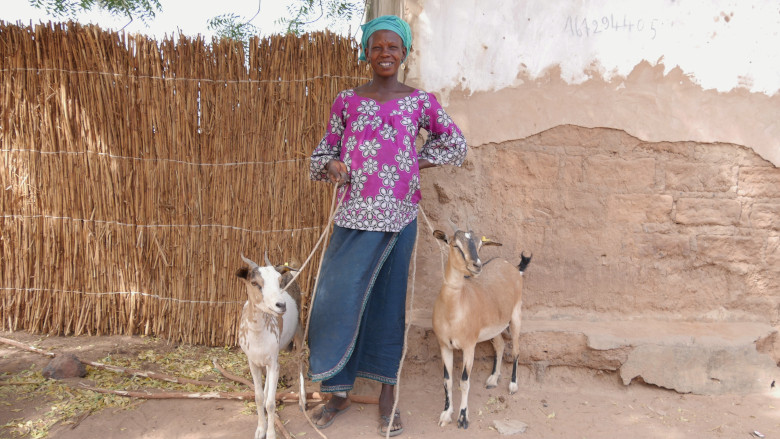 Beneficiary woman with goats she received from the project to use for breeding, passing on as part of community solidarity, milk production, and sale or own consumption. ©Albert Yéra BOUBANE/CNDN

Madarou Cissokho, mother of two children, lives in Boul Diabé Boumack in the commune of Ndiaffate (Kaolack, Senegal). She is a successful microentrepreneur. Trained in entrepreneurship and financial management, she received startup capital of CFAF 250,000 (approximately $445) from the project in 2018, which enabled her to open a shop. Madarou sells all the basic necessities, including food and hygiene products.  With the savings from her retail activity, Madarou has now helped improve village poultry farming. She sells chicken meat, which she can easily keep thanks to a recently acquired refrigerator. , Madarou has greater ambitions and wants to embark on the transformation of local produce and the production of animal feed. To achieve this, she plans to apply for a loan from a credit union.

“I received 12 hens from a neighbor who was among the first beneficiaries of poultry in our village. This gift has been a blessing for us.” Yama Diba

Yama Diba, a widow, lives in the village of Ndiba Ndiayenne in the commune of Medina Sabakh (Kaolack, Senegal). Having received 12 hens, Yama also gave 12 more to two new beneficiaries in the village. The sale of chickens allows Yama to provide for the needs of her family of eight children. In fact, the amounts obtained through the first three sales (20,000 FCFA, 30,000 FCFA and 35,000 FCFA (equivalent to $36, $54, and $63, respectively) served as the means of subsistence for the whole family, especially during the lean season.