A World Bank-funded project supporting Ningxia in northwest China in combatting desertification. Through the restoration of vegetation and ecological protection measures, the project addressed desertification challenges in more than 32,000 hectares of degraded, protected road and rail infrastructure, lessened silt in the Yellow River, and contribute to the reduction of sandstorms affecting people in areas as far as Beijing and Tianjin.

China has been severely impacted by desertification, with over one-quarter of the country affected by this challenge. While desertification has both natural causes, such as shifts in climate, and human-driven causes, such as the clearing of vegetation, overgrazing, and the depletion of water resources, challenges created by humans are the most prevalent in China, with change threatening to exacerbate these problems.

In the Ningxia Hui Autonomous Region in northwest China, desert encroachment is a historical challenge, with overgrazing of vegetation causing many dunes to lose their protective vegetation cover and become mobile. By 2010, over 57 percent of Ningxia’s territory (2.97 million hectares) was affected by desertification, with more than 3 million people suffering the consequences - including sandstorms and dust pollution.

Desertification was also undermining agricultural output in the region, reducing soil fertility and threatening to bury fields and infrastructure in sand. The impacts were being felt well beyond Ningxia. Sediment from degraded land was flowing into the Yellow River, reducing water quality and increasing the risk of flooding downstream, while sandstorms affected increasingly larger areas of northern China. 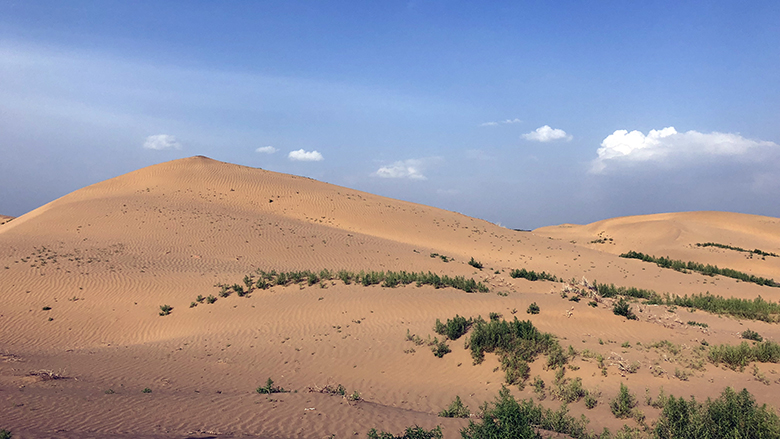 The Government of Ningxia requested World Bank support in 2010 to help improve the performance of desertification control and remediation efforts, which led to the Ningxia Desertification Control and Ecological Protection Project.

The project helped alleviate financing constraints faced by some of the counties in Ningxia which were being most severely affected by desertification - allowing for scaling up of pilot activities. Moreover, the project promoted technical advances by adopting improved restoration methods that introduced diversified indigenous grasses and shrubs to better control desertification, while simultaneously contributing to ecosystem resilience.

While such investment financing only addressed China’s desertification problem in selected areas, World Bank support generated other tangible impacts in other areas and influenced subsequent government projects through its innovation and demonstration effects.

The project was implemented from 2012 to early 2020. Through vegetation restoration and sand stabilization measures, the project protected infrastructure and farmland in selected areas of Ningxia and yielded broader impacts - such as reduced silt in the Yellow River and fewer sandstorms affecting northern areas of China. Moreover, the increased diversification of vegetation mainstreamed biodiversity at the landscape level, promoting a reversal of degradation processes and contributing to improved ecosystem resilience. More specific project results by the end of the project include:

hectares of degraded land were improved through vegetation restoration and natural regeneration promotion.

The International Bank for Reconstruction and Development (IBRD) financed the project with a loan of $68.50 million. The Bank also brought experience from previous forest projects in China as well as global knowledge and good practices in revegetation and degraded land restoration - through innovative planting measures that reduced soil water loss, the selection of drought-tolerant species, and the design and roll out of ecologically sensitive planting models that led to significantly improved survival rates. Moreover, the project promoted use of diverse species to mainstream biodiversity at the landscape level, thereby contributing to ecosystem resilience. Furthermore, the technologies developed under the project continue to influence management of arid land across China and in other countries struggling with desertification.

Ecologically friendly desertification prevention and control remains a core strategic priority for Ningxia’s regional development. As such, the regional government was strongly committed to the project, and relevant departments and project management offices at different levels worked closely with the Bank team to ensure effective implementation. In particular, project agencies dedicated significant efforts towards overcoming challenging natural conditions (very limited precipitation and poor soil nutrition) in project areas through the design of innovative and improved technical prescriptions to develop drought-tolerant vegetation restoration models, which were crucial to project success.

Desertification control remains a key priority in the 14th Five-Year Plan (2021-2025) of Ningxia. Lessons from the project are expected to continue informing relevant government projects and programs. The project's technical developments – including species selection and planting methods – have had broader impacts on arid land management at the national level, as well as in other desert-prone countries. The lessons learned have been used as part of trainings on desertification control for international delegations and international workshops. A follow-on project, the proposed project for sustainable management of degraded land in the Yellow River Basin – financed by the European Investment Bank (EIB) – is incorporating the plantation models and techniques developed under this project.

Wang Wenqing, a farmer living in Lingwu County said, “it used to be all desert here and the dust storms were so strong that we couldn’t keep our eyes open.” He and his fellow villagers participated in the effort to control the desert and make the area green. Today he grows and sells desert chives. “I have four greenhouses and make more than 100,000 yuan ($14,886) a year,” said he. 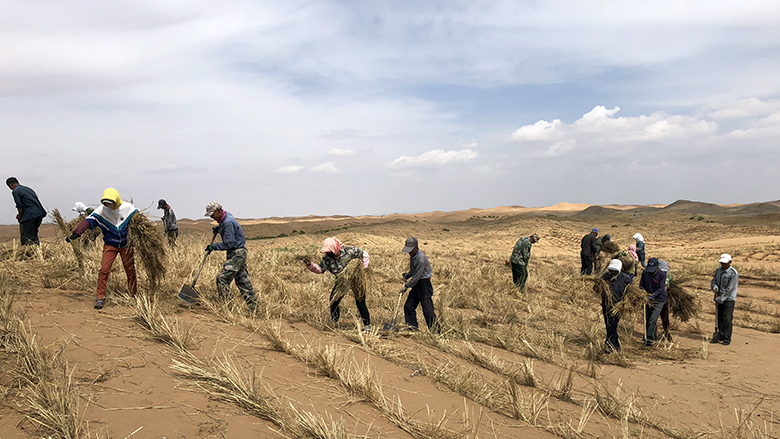