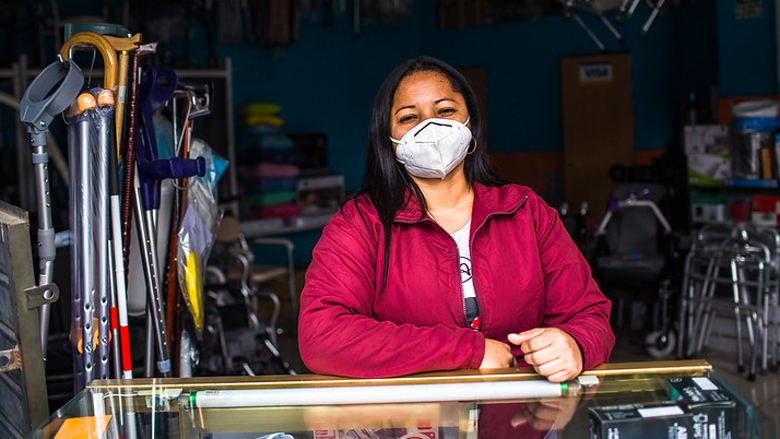 Woman attending a  store in Lima, Peru in times of COVID-19.

Progress in Latin America and the Caribbean over the last three decades has increased gender equality, notably in employment. With the onset of the COVID-19 crisis, however, necessary public health measures have put these gains in jeopardy. Throughout the pandemic thus far, women have been more likely than men to lose their jobs and less likely to regain them when conditions allow. Where families have school-age children, many more women than men have withdrawn from or lost work outside the home. By participating in information gathering on the nature and extent of these trends, Latin American and Caribbean countries have gained valuable insights and tools for accurately assessing the situation and preparing to address it as the crisis recedes.

Despite 30 years of progress in advancing gender equality in Latin America and the Caribbean (LAC), gender gaps remain. For instance, despite progress made building the female labor force over the past three decades (from 41% in 1990 to 53% in 2019), men are still far more likely than women to participate in the labor force, to have formal employment, to hold higher-quality jobs, and to work in higher-paying sectors. In addition, women—particularly young women—are more likely to be unemployed.

COVID-19 is expected to disproportionately affect female outcomes in health and education endowments, agency, and economic opportunity. This is because women are more likely (i) to take up caregiver or unpaid working roles, particularly given COVID-19-induced school closures and confinement measures, thereby leading to their possible permanent exit from the labor market; (ii) to be engaged in informal work and other forms of employment (e.g., self-employment in small subsistence businesses or domestic work) that may exclude them from formal social protection measures targeted to workers; and (iii) to be overrepresented in the hardest hit occupations, such as retail, travel, leisure, and hospitality. Without well-informed and timely policy responses, the COVID-19 crisis threatens to further widen these gender gaps in economic opportunities.

The LAC COVID-19 High Frequency Monitoring project conducted high-frequency phone surveys in three waves from May to August 2020, involving 13 countries in Latin America and the Caribbean (LAC) in collecting information to track the impacts of the crisis on households’ wellbeing. This real-time monitoring looked at the impacts of the COVID-19 crisis on labor, behavior, health, coping mechanisms, and public interventions. The Latin America and the Caribbean Gender Innovation Lab (LACGIL), conducted analysis on data collected from the participating countries: Argentina, Bolivia, Brazil, Chile, Colombia, Costa Rica, Dominican Republic, El Salvador, Guatemala, Honduras, Mexico, Peru, and Paraguay. The first round of surveys was conducted in May 2020 (most LAC countries had declared quarantines two months earlier, in mid-March 2020). The second set of surveys was collected between June 2020 and July 2020, and the third between July 2020 and August 2020. In each country, the surveys covered an average of 1,000 nationally representative individuals aged 18 or older with access to phones and attained 13,152 observations on labor markets, changes in household incomes, access to services, behaviors and knowledge around COVID-19, and demographic and household characteristics.

of women lost their jobs either temporarily or permanently, a rate 44% higher than that for men

The study findings were compiled into a policy brief that was published in English, Spanish, Portuguese, and French and were covered by several outlets, including the Economist, the World Bank, Foro Económico, and El País. The policy brief was also presented at public events, including a joint seminar by the World Bank and the United Nations, as well as in a public World Bank Webinar targeting academia, think tanks, international nonprofits, governments, and civil society in Bolivia, Chile, Ecuador, and Peru.

Survey results showed that at the onset of the COVID-19 crisis women were 44% more likely than men to lose their jobs. As the crisis evolved and temporarily unemployed workers started to go back to work, the difference in job losses among women and men persisted. Two reasons emerge most strongly. Highly female-intensive sectors—trade, personal services, education, and hospitality—explain 56% of all job losses, and the presence of school-age children at home is linked to a rise in job losses among women, but not among men. Details and additional key findings of the study include the following:

The analysis was conducted by the LACGIL, which works in partnership with World Bank units, aid agencies and donors, governments, nongovernmental organizations, private sector firms, and researchers to support impact evaluations and inferential research to generate evidence on what works in closing gender gaps in human capital, economic participation, social norms, and agency. In addition, the LACGIL disseminates findings to improve operations and policy making in the design of cost-effective interventions that tackle gender inequalities and drive change. The High Frequency Phone Surveys, the main source of data for this study, were collected by the World Bank Poverty and Equity Practice.

The study raised awareness concerning the unequal effects of the pandemic on women, and it helped produce better-informed policy making by prompting discussion on the unequal adverse effects of the pandemic on women. The dissemination efforts of the report targeted policy makers, World Bank offices, academics, international organizations, the civil society, and the wider community of stakeholders, prompting them to take action for an inclusive recovery. With this effort, the report has triggered discussion on the most effective ways to tackle gender disparities and has furthered the World Bank’s role in generating and disseminating evidence promoting gender equality.

The study provided greater insights into the gender implications of COVID-19 that will be key to informing the design of effective policy responses. Specific policy recommendations arising from the study for future responses and actions include the following: