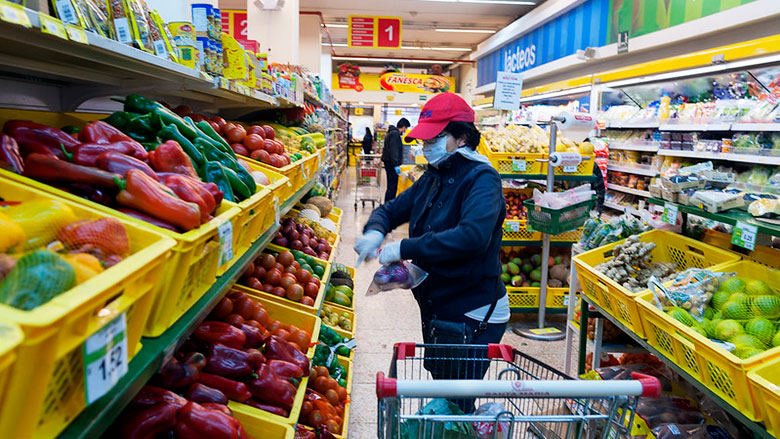 In response to the crisis created by COVID-19, Ecuador took action to protect vulnerable segments of its population from the impacts of the pandemic by using well-targeted social programs with the potential to reach up to one million households. Additional actions addressed the need for more flexible labor regulations; additional fiscal space to create spending priorities; and expressions of solidarity toward the migrant population, composed mainly of newly arrived Venezuelans.

In early 2020, the COVID-19 pandemic erupted, affecting the entire world. In Ecuador, the impacts of the COVID-19 crisis were expected to be particularly severe on poor and vulnerable households. This effect did indeed materialize, with an estimated 1.5 million residents pushed into poverty and worsening conditions for those who were already poor. The vulnerable included a large Venezuelan migrant population that had arrived in Ecuador in recent years.

Ecuador’s rigid labor market regulations had already contributed to an increase in the share of informal workers since 2014. Such rigidities included high firing costs, limited work modalities, and rigid working hours, which left little room for firms to adjust to economic shocks like the COVID-19 crisis. When formal workers lost their jobs, they faced long wait times and cumbersome processes to access unemployment benefits, which were available only for a relatively short period of time. Finally, the country’s weakened fiscal position and limited access to external financing constrained the government’s ability to respond to the crisis.

The World Bank had been working with Ecuador in a development policy financing (DPF) series to support the government’s structural reform program for strengthening its fiscal position and promoting sustainable growth. The first development policy loan (DPL) in this series was approved in June 2019. The COVID-19 crisis erupted during the preparation of the second operation. The DPF series was quickly restructured to support Ecuador's response to the emergency, while preserving the bulk of the medium-term reform agenda, such as reductions in energy subsidies, which will be even more critical to Ecuador's economy during the post-crisis recovery. Adding flexibility and expanding social protection was critical to help ensure the survival of productive firms and formal jobs. In this context, the second DPL supported these efforts: (i) creation of an emergency cash transfer scheme for vulnerable households not covered by existing social assistance programs; (ii) regulation of telework and flexibility in work arrangements to allow for emergency adjustments or suspension of work shifts while maintaining the employment link; and (iii) extension of amnesty to and facilitated regularization of irregular migrants.

To meet the challenges of the COVID-19 pandemic, Ecuador worked with the World Bank to create fiscal space, increase labor flexibility, and protect migrants. Efforts made throughout 2020 included:

Ecuadorians were pushed into poverty or worsened their living conditions due to COVID19.

The design of both DPF operations involved strong cooperation between the World Bank, the other multilateral banks, and the International Monetary Fund (the IMF Board approved a $6.5 billion program in September 2020). Further, the team worked closely with the government of Ecuador and benefited from the coordination efforts of the Ministry of Economy and Finance. The Bank also played a role in leveraging funds through the GCFF, as mentioned above, which was set up to support middle-income countries hosting large numbers of refugees, such as the Venezuelan migration to Ecuador.

Beneficiaries include approximately one million poor and vulnerable households, which benefited from the expansion of the emergency cash program. The first DPL supported the Ministry of Economic and Social Inclusion with the program’s first stage, which involved the delivery of two monthly installments of US$60 to 400,000 vulnerable households not currently participating in social assistance programs. The DPL series also benefited workers and entrepreneurs by removing barriers for private sector development, such as by strengthening the enforcement powers of the Competition Authority and improving the minimum-wage-setting process.

These operations were the first and second in a series of three DPLs. The emergency response approach continued under the second and third DPLs, the final of which was approved in November 2020 and disbursed in December 2020. This third operation will continue supporting measures to help alleviate the impact of the ongoing global COVID-19 pandemic on vulnerable households and those left unemployed, as well as special measures to protect vulnerable refugees. As in the first two operations in the series, the third DPL supports significant structural reforms that will contribute to longer-lasting, growth-enhancing change in Ecuador. Close collaboration between the Bank and the government of Ecuador will continue going forward.