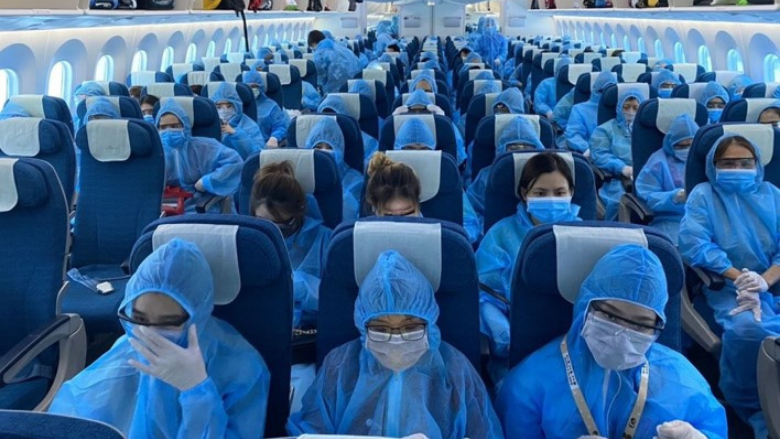 Vietnam have repatriated citizens from abroad as the noval corona virus spread all over the world. Photo: Vietnam Airlines

Immediately after COVID-19 outbroke in early 2020, the World Bank Group (WBG) shared a series of five policy notes with Vietnamese policymakers. These notes included a number of recommendations that were taken into consideration by the Government of Vietnam, including the adoption of safety nets to protect the most affected businesses and people, the speeding up of the digitization process by firms and government’s agencies, and the acceleration of the public investment program that was viewed as the main instrument to jump start the economic recovery process, leading to a positive GDP growth rate of 2.9 percent in 2020.

The COVID-19 pandemic has inflicted multiple shocks to almost all countries in the world, forcing   governments to make hard choices between saving lives and economic restrictions. Because of its proximity to the epicenter of the initial outbreak in China, Vietnam had to adopt quick and bold measures to contain the pandemic, including school closures and travel restrictions as early as end of January 2020. The Government turned to the WBG to assess the economic costs of these measures on the domestic economy, at the time when the COVID-19 pandemic started its global spread and where most government were left unprepared to cope with the pandemic. The WBG advised a sequencing approach, starting with the strengthening of health programs and shifting the course of fiscal and monetary policies to respond to the emergence of new vulnerabilities in the most affected sectors such as tourism and transport. The second phase emphasized the need to jump start the recovery through the combination of accommodative fiscal policies and no-regrets policies aimed at taking advantage of emerging trends in global value chains, digitalization and green recovery.

The World Bank has developed and shared a series of five policy notes with top policy makers, including the Prime Minister, between February and June 2020. These just-in-time notes were produced in record time to inform and advice the authorities on the evolution of the crisis not only in Vietnam but all over the world. Best practices were shared with the Government to shape its policy response, from health crisis management to stimulating the recovery of the economy and taking advantage of long-term opportunities emerging from COVID-19. These notes were initially written on a confidential basis to the Prime Minister, but subsequently the Government authorized the WBG to share them with a wider audience by June 2020 – as a tribute to our constructive dialogue.

The series evolved over time. Flexibility was important to address the Government’s needs and to adjust to the evolution of the COVID-19 crisis. The first note proposed an early assessment of the pandemic on the economy, while the second developed a comprehensive strategy to cope with the crisis over time. The third note focused on the fiscal package that was announced by the Government in early April 2020, with the ambition to alleviate the financial burden of the crisis on the most vulnerable businesses and people. The fourth and fifth notes included suggestions on how to jumpstart the economy in the post-COVID-19 period, and offered concrete ideas on how to take advantage of the epidemic to reshape the economy in the longer term, through the adoption of “no-regret” policies.

The series of policy notes was able to influence the Government’s response to the COVID-19 crisis, which has been assessed as one of the most effective in the world. Vietnam was not only able to limit the number of casualties (only 35 in 2020) but also to record a positive GDP growth rate of 2.9 percent in 2020.  More concretely, the authorities adopted the sequencing strategy advocated in the policy notes. In early 2020, a fiscal package was adopted to help the most affected individuals and businesses through a combination of tax breaks and cash transfers. Subsequently, the Government removed various administrative bottlenecks in the execution of the public investment program, which led to a 40 percent increase in its disbursement rate compared to the previous year. Significant reforms were adopted to enable the digitalization process in both the government and businesses, including e-payment systems.

Although the series of policy notes might not be the only source used by the authorities in their decision-making process, the clear alignment between WBG advices and the Government’s policy response reflects our strong and constructive partnership built over the years. The WBG team was frequently invited to participate in high-level workshops and meetings to discuss the content of the series, including with the Prime Minister and several Cabinet’s members.

The financial cost associated with the policy notes was minimal, as it was mainly the transfer of knowledge accumulated through the dialogue between the WBG and the Government built over the years. It was also the fruit of the WBG comparative advantage on international best practices. Part of this dialogue was funded by the Australian and Swiss Development Cooperations.

The main counterpart was the Prime Minister and his office, who wrote personally to thank the WBG for its contribution. The team also worked closely with the Ministry of Finance and Ministry of Planning and Investment as well as other line Ministries.  By taking the lead in the production of these policies notes, the WBG reaffirmed its leading role in the policy dialogue in Vietnam, including through a close collaboration with other development partners, especially the IMF

The dialogue between the WBG and the Government has continued after the delivery of the fifth and last policy note in June 2020.  The Bank, in close coordination with some other development partners, has prepared a policy framework that could be used to provide budget support if needed by the Government to close an eventual fiscal gap. Our effort has also focused on the need to accompany the authorities in their effort to better monitor the impact of the COVID-19 crisis on people and businesses. With the support of the Australian Government, we have implemented high frequency survey of households and businesses (with the first two rounds completed in June and August 2020). We are also finalizing the first ever COVID-19 big data Observatory that will better assess the pandemic impact through mobility, pollution and night lights indicators. The WBG has launched a series of analytical studies to examine the medium and longer impact associated to COVID-19, including on poverty and inequalities, global trade and value chains, jobs and fiscal policy.

“I highly appreciated the WB’s practical studies and assessments which were close to the real situation and advice to the Government of Vietnam on important macroeconomic recommendations and measures to promptly respond, support the people, and minimize negative impacts from the epidemic...With regards to WB’s (above-mentioned) policy notes, I have assigned Ministry of Planning and Investment, Ministry of Labor, Invalids and Social Affairs to study and receive the WB's recommendations to deploy supporting policies, formulating scenarios and socio-economic restoration plans after COVID-19 epidemic.” Nguyen Xuan Phuc, Prime Minister of Vietnam