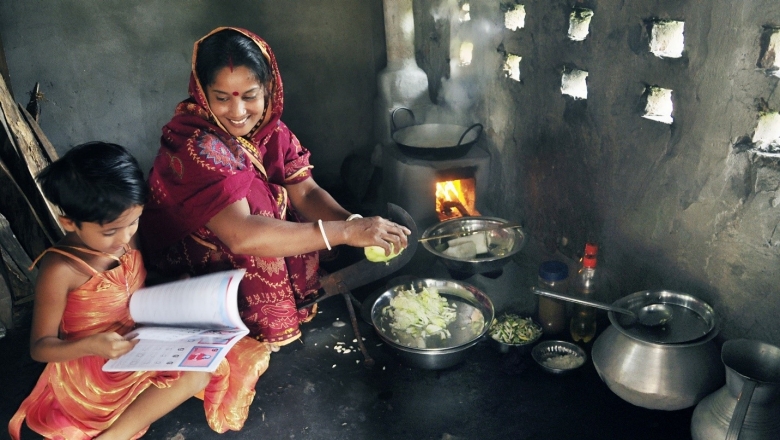 Ms. Shefali Ghosh from Savar, near Dhaka, teaches her daugher in the kitchen. She says, “My fuelwood usage has gone down so much. I used to buy fuelwood once in every 2 months, now I buy fuelwood once every 5 months. This has helped us save money.”

Life used to come to a near standstill after sunset for the great majority of Bangladeshis living in the countryside. Only two-thirds of rural households have access to grid electricity, and they suffer from frequent power cuts. Since 2012, the Second Rural Electrification and Renewable Energy Development Project (RERED II) has helped increase access to clean and renewable energy for 7.3 million beneficiaries in remote rural areas, build 1,130 solar irrigation pumps benefitting 35,000 farmers, and provided 1.8 million rural households with energy-efficient improved cookstoves.

At the time the project started in 2012, renewable energy made up less than 1 percent of power generation and the energy sector faced many challenges, including an acute shortage of electricity supply to meet demand; heavy reliance on natural gas for power generation, which itself is in short supply; and inadequate investments in power generation and tariffs to cover costs. Urban areas with large industrial loads were prioritized for power supply, leaving rural areas with a disproportionate share of power cuts. The dispersed nature of rural settlements and the numerous rivers that crisscross the country make grid electrification in many areas of Bangladesh both difficult and expensive. As such, off-grid renewable energy was the only near-to-medium-term option left for millions of people in the remote areas of the country.

people in remote, rural areas have access to clean and renewable energy.

Since 2012, the Second Rural Electrification and Renewable Energy Development Project has helped more than 5.4 million people in remote rural areas gain access to electricity through solar home systems (SHS). They would otherwise depend on expensive kerosene lamps, which are a source of indoor air pollution. With an SHS, a household can operate three to four lights and a television for at least four hours a day. The project has also supported solar mini-grids, solar irrigation pumps, improved cookstoves and biogas digestors to provide access to clear energy solutions to 1.9 million people.

The original RERED II Project, financed with a $155 million credit from the International Development Association (IDA), was approved in September 2012. Two additional financings were approved in 2014 and in 2018 in the amount of $78.4 million and $55 million, respectively. The World Bank’s multi-donor trust funds including Energy Sector Management Assistance Program (ESMAP) and Asia Sustainable and Alternative Energy Program (ASTAE) also provided resources to supplement the Bank’s implementation support.

The Infrastructure Development Company Limited (IDCOL) is the project’s key implementing agency. IDCOL was established by the Government of Bangladesh in 1997. IDCOL plays a major role in bridging the financing gap for developing medium- to large-scale infrastructure and renewable energy projects in Bangladesh. IDCOL has played a key role in facilitating coordination among the World Bank and development partners and channeling multiple streams of development finance effectively through its renewable energy programs under the project.

The Bank has helped mobilize financing from other development partners, including the Global Partnership on Output Based Aid (GPOBA) for $30 million, the United States Agency for International Development (USAID) for $7 million, the Bangladesh Climate Change Resilience Fund (BCCRF) for $10 million, and the Green Climate Fund for $20 million.

The project continues to support the Government’s goal to achieve universal access to electricity by 2021 and 100 percent coverage of improved cookstoves by 2030 as envisioned in the National Action Plan for Clean Cooking. In line with the rapid expansion of electricity grid in the country, the project will focus more on providing solar irrigation pumps and clean cooking solutions through improved cookstoves and biogas digestors, building on the successful implementation model of engaging with a strong network of local entrepreneurs and rural supply chains for a sustainable market-driven approach. 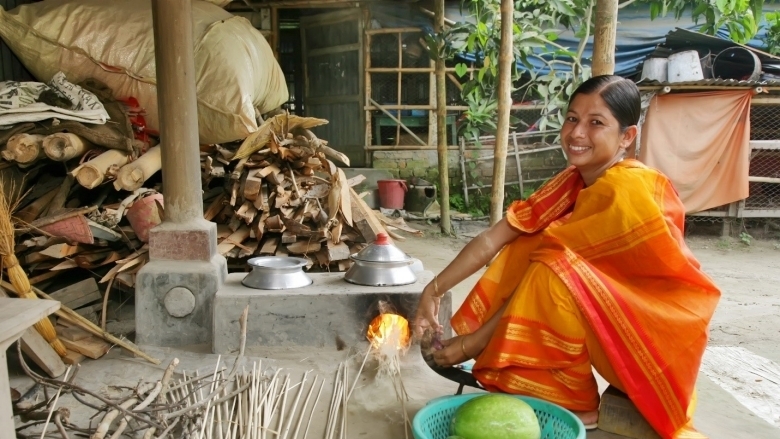 Ms. Nasrin Akter, from Satkhira in Bangladesh: “My cooking time has reduced because of the improved cook stove. I am able to spend time with my children before they leave for school.”