Increasing Access to Quality Secondary Education to the Poorest Districts: Ghana’s Experience with Results Based Financing in Education 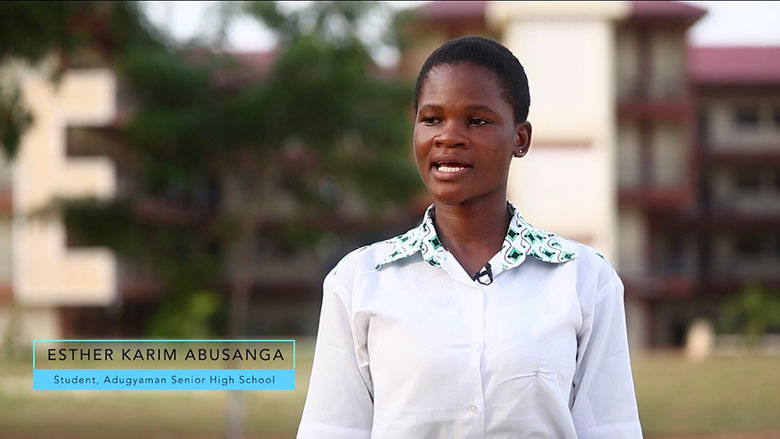 Esther Karim Abusanga is a student at Adugyama Senior High School in the Ashanti region of Ghana.

The Secondary Education Improvement Project has since 2014 helped deliver quality secondary education to nearly 568,000 children in Ghana. It has also provided scholarship and bursary support to over 20,000 children, 60 percent of whom are girls. This has helped increase transition rates from lower to higher secondary schools in the poorest districts from 39 percent in 2014 to 72 percent in 2019, and more than doubled improved learning outcomes for girls.

While Ghana has achieved near universal access to primary and lower secondary education, the gross enrollment rate in higher secondary education was below 45 percent in 2014, with large gender and regional disparities in access. The poorest students from the most deprived districts, or from rural areas, were five to six times less likely to access secondary education. Increasing completion rates at the basic education level had led to increased demand for secondary education but supply had not kept pace. In the West African Senior School Certificate Examination only 50 percent of students had passed integrated sciences and 37 percent had passed mathematics in 2014. Girls did considerably worse in these subjects than boys. Generally, most senior secondary schools in rural areas were perceived to have low quality and received much lower demand for places compared to the top 100 secondary schools. Without adequate interventions, increasing demand threatened to exacerbate low learning outcomes even further.

The Secondary Education Improvement Project (SEIP) is the first World Bank education operation in Ghana using a results-based financing approach. Supply-side constraints to access are addressed through the construction of new schools in districts, which previously had no public schools. Demand-side constraints are addressed with scholarships and bursaries to low-income students, especially girls. Scholarships were modified into bursaries with the introduction of free secondary education in 2017.  The bursaries now finance students’ transportation and school supplies other than textbooks, school uniforms, examination fees, boarding and lodging under the scholarships (tuition fees in public secondary schools have always been borne by the Ghana government). To improve the quality of science and mathematics in schools, teachers have received targeted in-service training. Additionally, performance partnerships have been made with schools for increased accountability. To support learning, Information and Communications Technology (ICT) solutions have been rolled out as well. Specific criteria were applied in selecting beneficiary schools to ensure pro-poor targeting.

The SEIP has supported the following improvements in education since project inception in 2014:

The SEIP is financed with a total International Development Association (IDA) credit of $196 million. This included $156 million at project approval in 2014 and additional financing of $40 million approved in 2017 at the request of the government of Ghana. Specifically, the project supports increased access with equity in an amount of $125.1 million and improved quality of education in selected low-performing senior secondary schools with a total of $15 million.  It also supports management, research, monitoring and evaluation with $15.9 million.

There is a strong collaboration among key development partners in Ghana’s education sector, including the United States Agency for International Development, the United Nations Children’s Fund, the Foreign Commonwealth Development Office (formally UK Department for International Development), the Japan International Cooperation Agency, and the Ghana National Education Campaign Coalition. Monthly meetings allow partners to provide updates on their interventions in the sector and to hear from the government on any developments or support required. Quarterly sector working group meetings are held with the Ministry of Education management and representatives from the implementing agencies, including the Ghana Education Service, the Center for Distance Learning and Open Schooling and the National Teaching Council.

The government of Ghana introduced free senior secondary education and free technical, vocational education and training in 2017, which demonstrated a clear commitment to improving access. Additional support to these sub-sectors is essential to ensure that quality improves, while access increases. An educated and skilled workforce is essential to reducing poverty and foster employability.  The Government’s National Coordinated Program continues to support post-basic education and skills development.

Esther Karim Abusanga is a student at Adugyama Senior High School in the Ashanti region of Ghana.  Prior to benefiting from a SEIP scholarship, she used to walk six kilometers to school each day – usually arriving in school exhausted and unable to concentrate.  With the SIEP scholarship, Esther can afford hostel facilities close to her school and now has more time to study and complete her assignments. Esther says benefiting from the SEIP scholarship has improved her academic performance.