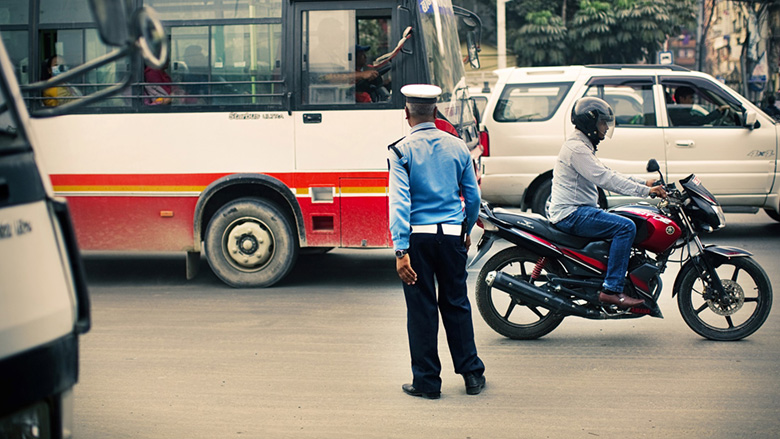 The global impact of the Global Road Safety Facility (GRSF)-led interventions under the Bloomberg Philanthropies Initiative for Global Road Safety (BIGRS) has been profound through road infrastructure and speed management. Over the 5-year program, GRSF partnered with the International Road Assessment Programme (iRAP) to assess baseline safety in existing roads and guide investments. Recommendations were translated into design solutions or infrastructure built for about 1,500 km of improved urban roads and more than 5,000 km at the country level in five countries (Brazil, China, India, the Philippines and Thailand) and ten cities (Accra, Addis Ababa, Bangkok, Bandung, Bogotá, Fortaleza, Ho Chi Minh, Mumbai, São Paulo, Shanghai). Once implemented, it is estimated that these measures will save 7,000 lives in the cities and 23,000 lives in the countries between 2020 and 2030. Since 2007, the entire BIGRS initiative has saved an estimated 312,000 lives and prevented up to 11.5 million injuries. It is estimated that each $1 spent in the projects’ road safety sub-components has leveraged $80 more.

Worldwide, road transport generates 97 percent of fatalities from all modes of transport, being the 1st leading cause of lives lost for young people. According to the World Health Organization, approximately 1.35 million people are killed and 50 million more are injured annually in road crashes worldwide.

These figures place road traffic injury well ahead of malaria and tuberculosis as contributors to the global burden of disease. Most at risk are young adults and vulnerable road users (cyclists, motorcyclists, and pedestrians), with road crashes as the number one killer of young people (aged between 5 and 29) in all regions, and the eighth overall killer worldwide. While representing just 60 percent of the world’s registered vehicles, low-and-middle-income countries (LMICs) account for 93 percent of road deaths globally. In LMICs, lack of safe infrastructure in combination with growing motorization rates and high-speed travel have largely contributed to the burden of road deaths.

This is the first systematic expansion of the World Bank’s road safety agenda to address the rising issue of road traffic injuries in urban settings across many cities and countries. The Initiative provided the opportunity to adapt and innovate existing technologies to address issues related to urban environments including excessive speed limits, mixed traffic situations as well as concerns for the vulnerable road users.

In addition to saving many thousands of lives, improvements delivered by the BIGRS program –through better speed management– also provide co-benefits by reducing transport related greenhouse gases, air and noise pollution, as well as improving efficiency and inclusion.

Over the 5 year program (2015-2019), GRSF partnered with iRAP through a Recipient Executed Trust Fund (RETF) to assess baseline safety in existing roads, completing 2,700 km (of road carriageway length) at city level, as well as national level assessments totaling around 12,600 km. Recommendations were translated into design solutions or infrastructure built for about 1,500 km of improved urban roads, and more than 5,000 km at the country level.

An impressive over 10,000 professionals were trained in road safety techniques and policy under the BIGRS program. Moreover, as part of this project, GRSF enhanced road safety management capacity in relevant institutions, by providing new technologies to collect and analyze crash data, through the World Bank developed Data for Road Incident Visualization, Evaluation and Reporting (DRIVER) open-source system.

The GRSF-BIGRS partnership was fully funded through a Trust Fund (TF) from the Bloomberg Philanthropies. This grant supported 24 World Bank-financed loans and advisory services, which have a total dollar value of almost $8 billion, as of end of 2019. It is estimated that each $1 spent in the projects’ road safety sub-components has leveraged $80 more.

During this program, all their activities were coordinated together with colleagues from World Bank Country Offices and under the guidance of the World Bank Country Management Units (CMUs). A good example of this collaboration is the Shanghai Pilot Project, where through extensive discussions with Yangpu district officials, three roads and one network totaling 100km in the District were selected for iRAP assessments and later on upgraded with local funding, integrating all safety recommendations and reaching a 5-star road safety assessment, the highest.

In addition, the engagement under this partnership led to a road safety dedicated US$1.8mil. Reimbursable Advisory Services (RAS) in the Philippines, which built on pilot activities and capacity building started under BIGRS.

The GRSF team has also engaged numerous local organizations and individuals to lead delivery of activities. Through this practical experience, they have now developed capacity to deliver assessments and training in the future. The organizations include Labtrans at the Universidade Federal de Santa Catarina (BrazilRAP); Chulalongkorn University (ThaiRAP); Research Institute of Highway (ChinaRAP); and the University of Transport and Communications in Vietnam.

In in the new BIRGS 2020-2025, GRSF plays a key role in engaging governments to support the initiative’s efforts to adopt safer road infrastructure designs and improve existing road networks to accommodate all road users, by conducting assessments of high-risk roads, providing recommendations for safety improvements, providing technical guidance on speed management, and supporting governments to adopt crash data management systems. The initiative builds from the success and impact of 12 years of investment under the BIGRS 2015-2019.

“The iRAP activities through the BIGRS definitely created an impact of improving local capacity. With their assistance together with the World Bank, we established Thai Road Assessment Program (ThaiRAP) and it is now being recognized in the country. The star rating methodology is being adapted by the government (…) Collaboration between international experts and the locals is one of the key factors leading to the success of the project. We appreciate the BIGRS and hope to collaborate under a similar kind of project again in the future.” – GRSF partners from the Chulalongkorn University, Thailand. June 25, 2020.