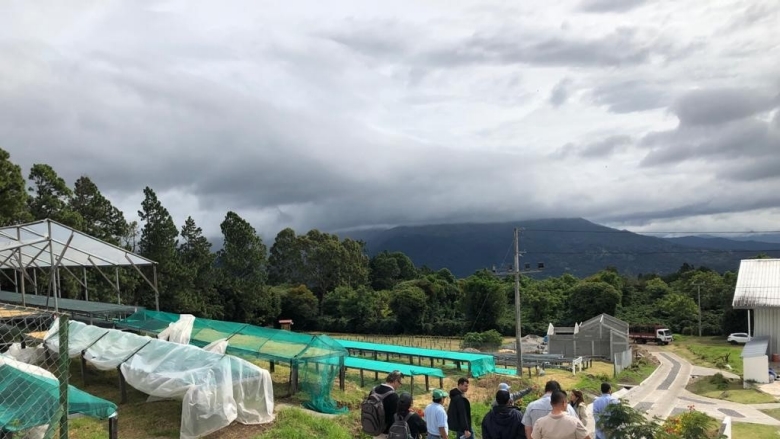 From 2014 to 2019, building on a strong foundation of conservation and sustainable production projects going back to 1998, Panama has addressed habitat fragmentation and other biodiversity threats by increasing its Protected Area conservation efforts to provide environmental benefits and sustainable, enhanced livelihoods for the nearly 200,000 people living in these areas’ buffer zones.

Panama, situated on the isthmus linking Central and South America, is located in the world’s most biodiverse region, according to the United Nations Convention on Biological Diversity, and boasts one of the highest percentages of forest coverage in the world, covering 60.4 % of the country's total area. The country has unique relevance for the flora and fauna of three different bodies of water (the Caribbean Sea, the Gulf of Chiriquí, and the Gulf of Panama), and its forests provide critical biological corridors for species migration.  Conservation of this biodiversity and the country’s natural resources more broadly has long played a significant role in economic growth and reduction of poverty and inequality: Major contributors to the country’s GDP, including the Panama Canal and tourism, depend on conservation. It is estimated that two thirds of Panama’s forest coverage are in Indigenous Peoples’ (IP) traditional territories and that close to one million hectares of the indigenous territories have dual tenure, meaning they are simultaneously both indigenous territory (comarcas or claimed lands) and protected areas. However, the critical biodiversity contained in Panama’s System of Nationally Protected Areas (SINAP) has long been threatened by habitat fragmentation due to pressures on their buffer zones from productive activities. These include agriculture and ranching, often by rural and Indigenous communities living in the buffer zones, which have some of the highest poverty rates in the country and are the most affected by environmental degradation. Habitat fragmentation from such activities also threatens the broader efforts in the Mesoamerican Biological Corridor to maintain connectivity along cross-border biological corridors. Additionally, Panama ranks 14th among countries most exposed to multiple impacts from climate change based on land area. Fifteen percent of its total area and 12.5 % of its total population are vulnerable to two or more hazards. In addition, Panama ranks 35th among countries with the highest percentage of total population considered at a relatively high mortality risk from multiple hazards. The canal region has already seen a temperature rise of an estimated 1.1 C, and this could reach up to 3.6 C by 2100, posing large impacts on water runoff and extreme droughts. Expected impacts from climate change include among others: increased incidence and intensity of crop failure; increased intensity of heat stress on crop production and vulnerable population; loss of biodiversity and forests; reduced water quality and quantity; and increased incidence of climate-related human health impacts.

The Sustainable Production Systems and Conservation of Biodiversity (SPCB) Project was designed to address habitat fragmentation and other biodiversity threats by furthering Protected Area conservation efforts undertaken by previous World Bank–financed projects, investing in mainstreaming biodiversity-friendly practices in the buffer zones, and introducing innovation to help ensure the long-term technical and financial sustainability of achievements made. Moreover, the project was designed to contribute to knowledge and awareness of the value of biodiversity more broadly and to support enhanced corridor integrity and connectivity, contributing to regional and global biodiversity conservation efforts.

During its active period, from 2014 to 2019, the Sustainable Production Systems and Conservation of Biodiversity Project achieved the following results:

The World Bank, through the Global Environmental Facility (GEF), provided a recipient-executed trust fund grant in the amount of US$9.57 million to support the project. The Bank also provided critical support for project design preparation and for supervising its implementation. In particular, the Bank played a critical role in shaping the vision for the Endowment Fund according to international best practice as well as the capitalization requirements of the Bank, GEF, and the Panamanian government. The Endowment Fund thus became operational within the project’s timeframe and grew more quickly than anticipated; at project closing in December 2019, it had a capitalization of US$10.4 million and US$20.3 million in its revolving fund.

The project was also supported financially with counterpart contributions from the government of Panama (US$9.4 million), private companies (US$4.16 million), and beneficiary contributions (US$1.23 million). Beneficiary organizations such as cooperatives (including, among others, COCABO, COOBANA, APRE, GORACE, Solarys, and Nalu Nega Women Artisans Network), local tourism authorities, and private organizations (National Network of Private Reserves) played a significant role in designing activities for project investments in the productive buffer zones.

The current preparation of a follow-on Bank-financed project (Panama Sustainable Rural Development and Biodiversity Conservation Project), which aims to strengthen biodiversity management and improve the economic opportunities and climate resilience of targeted beneficiaries, attests to the prospects for sustainability of the SPCB project. Through the Endowment Fund, currently with capital of US$20.3 million, the project contributed significantly to the financial sustainability of Protected Area management in Panama. Another strong indicator of the project’s sustainability is the Ministry of Environment’s intention to extend a conservation model piloted by the SPCB project, the National Network of Private Reserves, through a decree to legally establish the reserves as Protected Areas.