Between 2014 and 2019, the Sierra Leone REDiSL project supported over 1,800 schools to improve the quality of education through performance-based financing and helped more than 1.2 million students and teachers during the Ebola crisis. This was achieved through the provision of remote education (radio) during lockdowns, and accelerated learning activities during the recovery phase. REDiSL also established the first structure for effective deployment and management of teachers – the Teaching Service Commission.

The education sector in Sierra Leone has experienced significant increases in enrollment rates, but there are important inequities in access.  Further, learning outcomes remain low, among the lowest in the region, and there are high repetition and drop-out rates. A 2014 Early Grade Reading Assessment found that 87 percent of Grade 2 students could not read a single word. In public examinations, only 50 percent of Basic Education Certificate Examination candidates received a pass in English or mathematics. For those fortunate enough to stay in school, the low quality of education services is driven by poorly trained teachers, an inadequate teaching and learning environment, insufficient teaching and learning materials, and an inadequate student assessment system. Together, these issues are further exacerbated by weak governance and management of the sector.

The Revitalizing Education Development in Sierra Leone (REDiSL)  project aimed to improve the learning environment in targeted schools and establish systems for monitoring of education interventions and outcomes while building the foundation for better management and efficiency within the sector. The project had a two-pronged approach: (i) supporting the most disadvantaged schools; and (ii) strengthening the education systems. Despite operating in an environment with a difficult political economy and in a context of limited and unequal access, poor retention and poor quality, the project contributed to addressing key challenges and laying the foundation for the sector.

The REDiSL aimed to support the Education Sector Plan – particularly its aims of decentralizing education service delivery through Performance-Based Financing (PBF). The PBF sought to increase educational equity by targeting those local councils with the lowest educational outcomes and highest poverty levels. It also aimed to improve the learning environment whilst strengthening the capacity of school management committees in managing the school grants and capacities of the local councils, district education staff, and heads of schools in the administration of the grants.  Thus, the financing addressed several aspects of the education system. Examples of PBF indicators included: percentage of students assessed regularly by teachers; percentage of teachers found teaching (during school visits); and percentage of students achieving grade level competency. REDiSL also supported innovation through the use of technology, including the digitization of the country’s annual school census, digitized monitoring of the performance-based assessments for school grants and the use of remote learning during the Ebola crises. This application of technology is important given the lack of systematic data in the sector and for timely and accurate data for decision makers. Through these activities, REDiSL facilitated the flow of information from the school level to the local and central levels and allowed communities to receive information on their progress in a timely manner. 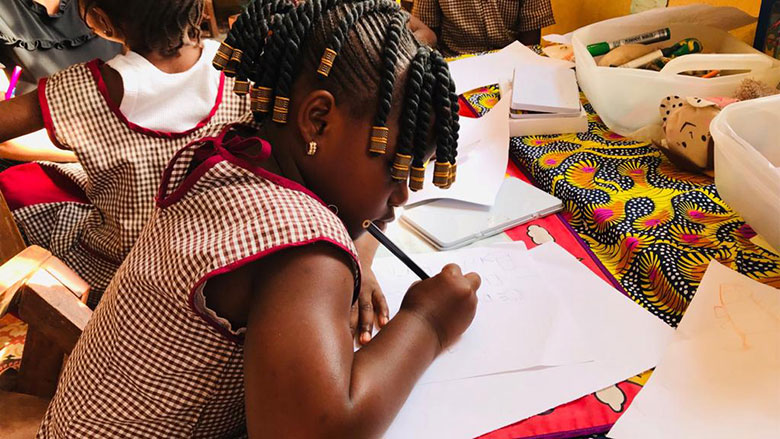 In addition to being the grant agent of the Global Partnership for Education, the World Bank provided an additional US$10 million in financing through the International Development Association (IDA) to scale up support to primary schools and to further strengthen the newly established Teaching Service Commission. On the knowledge and learning agenda, analytical and advisory services support included: (i) The Quality and Management Teacher Study; (ii) the testing of low-cost reading pilots using a community of practice teacher training models with funding from the Results in Education for Children Trust Fund; and (iii) Early Learning Platform trust fund, which provided technical assistance to support capacity building on early childhood development (ECD) by upgrading course content and supporting materials for delivery of ECD courses, as well as the piloting of an ECD coaching system.

REDiSL was financed by several development partners, including:

Building on the REDiSL project, the World Bank recently approved the Free Education Project financed through a $50 million IDA grant and approximately $15.6 million through a Multi-donor Trust Fund with commitments from the European Union, Irish Aid and the UK Foreign Commonwealth and Development Office. The project will ensure that the outcomes achieved under REDiSL are maintained and incorporates lessons learned to the greatest extent possible, to further strengthen human capital outcomes.

Susan is a student in primary school benefitting from PBF in the Kenema district. Her teacher noted that “since the start of the PBF scheme, the community, teachers and students are happy. We as community teachers are able to get some support and provide our students with basic learning materials. It has been very good. We hope it continues”

Michael is a student in the newly constructed pre-school in Mabruka, Tonkolili district. His teacher noted, “It has been great having the pre-school. The children are learning through play and learn.  This school has changed the community.”