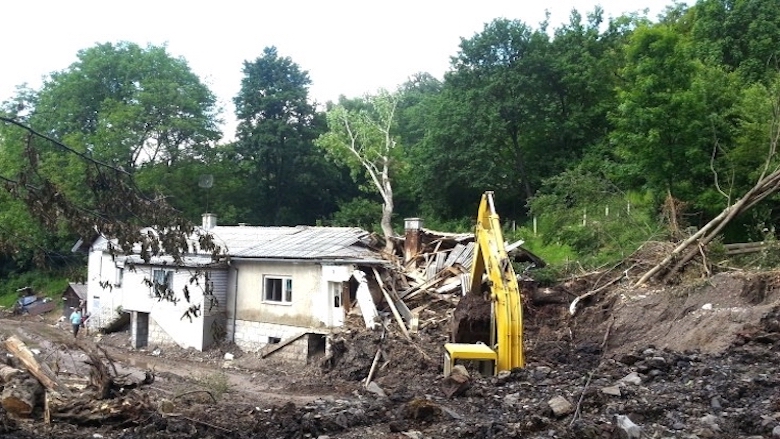 As much as 20% of Serbia's entire population has been impacted by the worst floods in the country's documented history. Landslides - such as this one in Krupanj - triggered by unprecedented rains have left many people homeless.

The World Bank’s Floods Emergency Recovery project supported Serbia after the devastating floods of 2014. The project helped Serbia to build back by restoring its power system and bringing back a reliable electricity supply, recovering agricultural production to pre-flood levels and strengthening the country’s capacity to respond to future climate events. In addition, by end 2019 the project rehabilitated flood protection infrastructure, protecting from future floods over 360,000 people, of which 30 percent are women.

Unprecedented heavy rainfall in the spring of 2014, in Serbia, resulted in fatalities and caused significant economic hardship for much of the population: 51 people died, nearly 52,000 people lost their jobs, 110,000 households were cut off from the electricity supply, and an estimated 125,000 individuals fell below the poverty line. Vulnerable groups such as elderly farmers – which account for Serbia’s poorest 40 percent - were hit the hardest. About 20 percent  of the country’s entire population had been impacted by the floods.

The most affected sector was mining and energy, as the country’s biggest open-pit coal mine and primary source of fuel supply was flooded. The damages in the energy sector were estimated at €488 million, and the power shortage was estimated at 15 percent of demand over the winter season.

Agriculture was also affected significantly by the floods: farmers suffered nearly €230 million in losses, with the floods rendering some 12,000 hectares of crop area no longer useful for agricultural production and resulting in more than €90 million in lost income from damaged crops. The flooding also damaged essential flood protection infrastructure, such as drainage, which left the country more vulnerable to future floods.

The project aimed at helping Serbia restore its growth following the devastating floods.

The immediate phase entailed urgent recovery and reconstruction efforts in the hardest-hit sectors of the economy – energy and agriculture, as well as the rehabilitation of critical flood protection and drainage infrastructure. The latter phase entailed investments in strengthening flood protection infrastructure across Serbia and building the technical capacity of government agencies in flood prevention for longer-term resilience.

The project also aimed at helping Serbia to “build back better” by designing sustainable recovery interventions such as boosting agricultural productivity and improving energy efficiency, while also rehabilitating critical agricultural and energy assets.

The project sought to build upon the Bank’s experience in employing multi-sectoral recovery approaches. Its design provided an integrated and sustainable solution by combining interventions across energy, agriculture, livelihoods, and disaster risk management sectors.

The Floods Emergency Recovery project has delivered critical outcomes to help Serbia build back after the devastating floods of 2014:

By ensuring continued energy supplies to meet demand, compensating for the lost income of farmers, improving protection for the population’s livelihood and assets from future floods, and strengthening the capacity of government partners, this project improved the conditions for economic recovery in Serbia. In 2015, GDP growth bounced back to 0.8 percent.

A Recovery Needs Assessment placed the total value of the effects of the disaster at nearly 2 billion euros – more than 4 percent of Serbia’s Gross Domestic Product (GDP).

The World Bank, through the International Bank for Reconstruction and Development (IBRD), provided a loan of US $300 million to the Floods Emergency Recovery Project for Serbia.

The project brought together the following partners:

The project also built a strong partnership with the European Union and the United Nations, which focused their support in the reconstruction of housing since this was also one of the worst-hit sectors. Coordinated support helped to increase the momentum for reconstruction efforts while promoting sustainable interventions.

Moving forward, the Bank is committed to incorporate the lessons learned from the Floods Emergency Recovery Project, including on multi-sector interventions and partnerships that have supported Serbia’s recovery.

The project’s long-term resilience-building efforts are being scaled up by other Bank-financed projects. One such example is Serbia’s Competitive Agriculture Project approved in 2019, which among wider measures on boosting agricultural productivity, is focusing on introducing climate-smart agriculture approaches to improve the resilience of farmers to future calamities.

Over 100,000 farmers living in the flood-affected areas received critical income support through grants delivered by a World Bank-financed Farm Incentives Program during the project duration

The project improved flood protection infrastructure across the country, benefitting around 25,000 households – or 360,000 people by 2019.