Benefiting, 3.6 million out of 4.5 million rural citizens, including 2 million women, the Second Rural Investment Project (2012-2019) improved infrastructure and livelihoods by empowering communities to decide on and implement their own micro-projects to address their needs. It capacitated low-skilled rural women who faced multiple barriers to set up their own businesses which led to the formation of the first association for rural women in Azerbaijan. This level of local participation is remarkable given the centralized nature of the state.

Challenges
After independence, though Azerbaijan saw a remarkable reduction in poverty by boosting resource led economic growth, the benefits from this growth were not evenly distributed and 65 percent of the population, including 54 percent  in rural areas, remained vulnerable to shocks and at the risk of falling back into poverty, Spatial disparities persisted with rural areas falling behind with regard to basic infrastructure (e.g. roads, water, energy), services (e.g. health, education) and economic opportunities. The rayon or district executive authority representing various line ministries and elected officials at the municipal level lacked the financial and institutional capacity to support community driven rural development.  Rural women with limited opportunities to improve incomes faced multiple constraints in participating in the marketplace due to economic and social challenges. These included traditional gender norms, lack of skills, mentors, networks, access to finance and assets and markets. They also lacked the ability to influence decision-making in their communities.

Approach
The  Second Rural Investment Project in Azerbaijan (AzRIP-2) built on the successful implementation of the preceding project that supported community driven development, which allows community groups to take charge of their own development decisions and resources. The second project expanded considerably in scale and scope covering all the 58 rural districts of the country and introduced a livelihood component responding to strong demand from communities. The project gave space to all social groups (women, youth, and the vulnerable) to take the lead in solving problems facing their community through 1,512 microprojects, that invested in the construction and/or rehabilitation of economic and social infrastructure and through 26 livelihood micro- projects. Strong emphasis was placed on women’s empowerment through customizing the self-help group model introduced in the Europe and Central Asia region for the first time. The self-help group model has three decades of experience and learning behind it and has been supported by the World Bank in South Asia, East Asia and Africa. This model provided low skilled rural women with the tools, skills and networks to set up their own businesses and to access finance and markets along while strengthening their ability to exercise leadership. A rural business incubation and development system was set up by training local youth to provide business development services at source to the businesses owned and managed by rural women.

Results
Key results achieved from 2012 to 2019 were the following:

Bank Group Contribution
The World Bank, though the International Bank for Reconstruction and Development provided initial support of $30 million, and was increased to $80 million through additional financing in 2014. The Government’s contribution was $50 million while $10.07 million was provided by beneficiaries. The total project cost was $140.07 million.

Partners
The second project benefited from a strong partnership with the Government of Azerbaijan (GoA) and complemented its strategic vision and development priorities. The Bank team worked with a project management unit (PMU), well-trained in Bank operations, within the Agrarian Credit and Development Agency of the Ministry of Agriculture. The Bank facilitated south-south exchanges with India and Bangladesh to study innovations in rural and local development.   The visit to India resulted in the introduction at the request of government, of a women’s economic empowerment pilot based on the self-help group model. Technical assistance was provided by Government of India (GoI) under a technical exchange program with GoA, to train the PMU and to pilot the first WDEGs in Azerbaijan.  In addition, GoI provided resource persons to train local youth as Community Business Promoters. A cadre of business savvy youth in rural areas now support the businesses of rural women and the first rural business incubators in Azerbaijan that deliver services at source were set up. This resulted in a unique partnership between young people and women.  In addition, local beneficiaries provided cash and in-kind contributions for each microproject, while the 110 businesses were seed funded by the women’s own group savings.

Moving Forward
AzRIP-2 was a flagship program of the government and lessons learnt from the project were used to design and implement a component modelled on AzRIP 2’s community-based infrastructure provision in GoA’s ongoing Integrated Rural Development Project funded by the Islamic Development Bank. Staff from the AzRIP PMU are helping to implement this component. The WDEGs continue to be sustained by ARWA. The association is partnering with FAO and USAID projects supporting rural women in Azerbaijan to increase its reach. WDEG members are an active part of the coronavirus response in their communities and have by stitched and distributed masks and food and other supplies to vulnerable members of their community. Building on the results of AzRIP and in accordance with the government’s vision to be an innovation led competitive economy, the Bank laid the groundwork of a Smart Villages Program as a second-generation program that will apply technology and innovation to rural development. Based on a presentation made by the World Bank in July 2018, pilots of Smart Villages have been included by government in the State Program for Socio-economic Development of the Regions, 2019-2023.

Beneficiaries
The project was had a deep and lasting impact on rural women enabling them to take on a greater role in society and the marketplace. Their economic contributions and support to their communities are greatly appreciated by local authorities and communities. They have tackled many issues like preventing child marriage, constituting a private fee-based system to collect household waste from residences ecetra. Municipalities and rayon authorities actively seek their help in solving local issues like reducing the consumption of water by citizens.
“I now feel confident and strong. I was not like this one year before. Nobody knew me in my village. I now have a profession” said Gulshan Huseynova, Barda rayon, Azerbaijan.

The creation of the Geographic Information System (GIS) map that geo-located and provided information on each microproject providing transparency regarding how government projects are funded elicited positive responses from communities and government counterparts.
“In all my time in government, I have not seen anything as powerful as the GIS Map. Now the public can see exactly how the government spends the funds of the project”, said Adalat Aliyev, Ministry of Finance, Government of Azerbaijan. “I can now check out all the projects in each community in the country and can ask my local authorities to carry out similar projects” wrote Bashir Hasanov from Ismailli rayon. 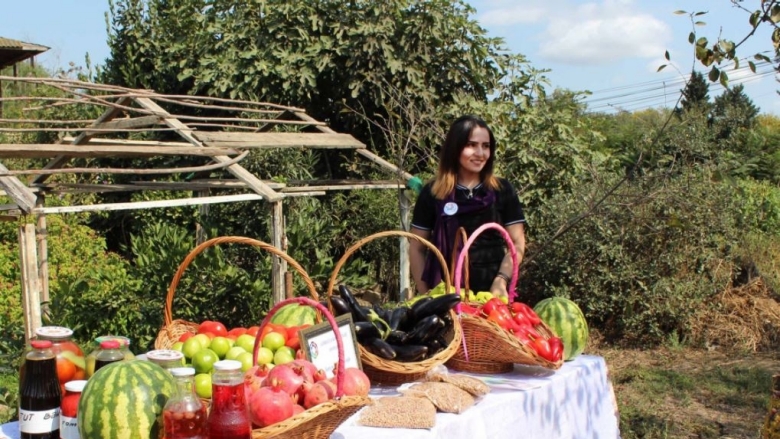