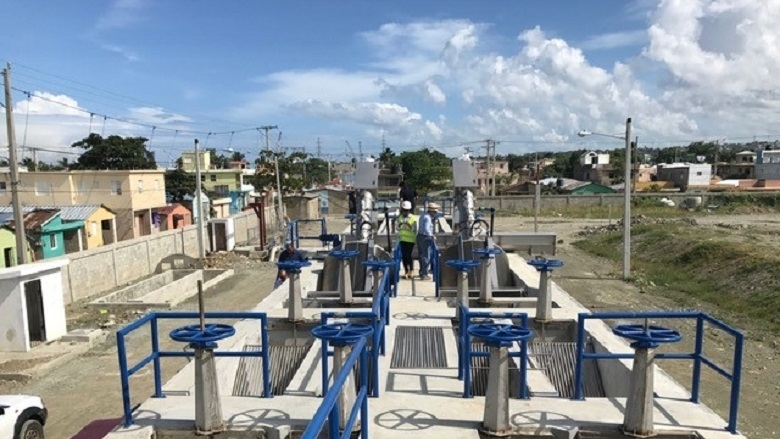 The Dominican Republic has improved the quality of sanitation services for 142,952 people through investments in new sewerage, wastewater treatment, and disposal infrastructure based on an innovative submarine outfall. Expansion of the sewerage network specifically benefited 3,679 people in the poorest neighborhoods of the city. In addition, the project enhanced the operational and financial performance of three regional water utilities working toward better service delivery.

The Dominican Republic has impressive coverage of basic water and sanitation service: 95 and 82 percent, respectively, mirroring regional statistics. Yet high coverage does not translate into high quality services. Only 15 percent of the inventoried water systems practiced chlorination, and discontinuity of water supply and rationing is reportedly common, ranging from 1.5 to 10.5 hours per day. Only 53 percent of the water treatment plants and 26 percent of the wastewater plants are operating adequately.

The poor quality of services derives to an extent from lack of clarity in the institutional and legal framework with respect to policy making, financing, tariffs, and service provision. Despite some modernization efforts intended to create a lead agency and a new water law, benefits have been slow to materialize. Additionally, the lack of wastewater treatment poses a threat to water resources used for human and agricultural consumption and for recreation in tourist areas.

The World Bank Group, through the International Bank for Reconstruction and Development (IBRD), provided a loan of US$ 27.5 million toward total project costs of US $35.4 million. The Bank supported project preparation and provided analytical tools for the design of the project’s normative and operational processes, providing advice to the government based on international experience and previous lessons learned.

The project received US$ 7.9 million in counterpart financing, which came from the national government. The project was led and implemented by the Ministry of Economy Planning and Development (MEPyD) and its executing unit. In addition to MEPyD, the main implementing partners for utility improvements and infrastructure works were the regional water and sewerage corporations, including CORAAPLATA, CORAAROM, and CORAAMOCA. The National Drinking Water and Sewerage Institute (INAPA) also played a coordinating role on sector reform efforts.

Direct and indirect beneficiaries of the project include:

·       CORAAMOCA has 196,000 and CORAAROM has 183,000 people in their service areas who benefited indirectly from operational improvements.

The water supply and sanitation sector in the Dominican Republic is undergoing a gradual transition. Continued support to the sector is needed as the country contemplates reform efforts to transition INAPA, the country’s single largest service provider, to a regulatory entity and to decentralize service delivery to autonomous regional utilities similar to CORAAPLATA, CORAAMOCA, CORAAROM, and others. The experience provides excellent opportunities for peer-to-peer learning in which service providers share their experiences with others elsewhere in the country. In coastal areas receiving heavy tourism, utilities similar to CORAAPLATA, such as Boca Chica Aqueduct and Sewer Corporation (Corporacion de Acueductos y Alcantarillado de Boca chica), are interested in sanitation solutions such as deepwater submarine outfalls to help protect coastal recreational water bodies from pollution. The World Bank’s Water Global Practice envisions continued engagement with the sector to support continuing improvements in the efficiency and quality of water supply and sanitation services in the Dominican Republic.