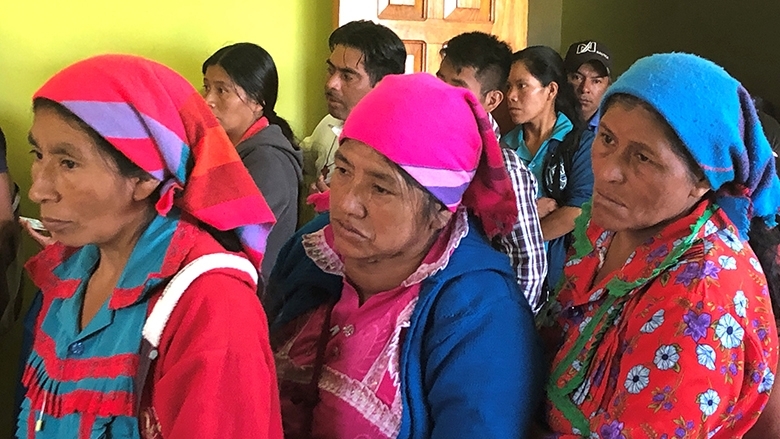 Honduras’ modest economic growth over the past 40 years could not keep pace with population growth, resulting in high levels of poverty and inequality. In 2010, Honduras was deemed one of the poorest and most unequal countries in the region, and it was threatened by global financial and internal political crises that exacerbated poverty levels and further affected poor households’ ability to smooth consumption and invest in human capital. Between 2005 and 2009, poverty rates were reduced from 65 to 59 percent, and extreme poverty rates were reduced from 45 to 36 percent, but high levels of poverty continued. Households in extreme poverty faced difficulties smoothing consumption, leading them to use negative coping strategies, such as taking children out of school and encouraging them to work or reducing health care visits, which affected their human capital development. Similarly, stark inequities were observed in children’s health and education indicators: 43 percent of children under five in the poorest quintiles experienced malnutrition, while only 5 percent of children under five in the richest quintiles did so; school enrollment among children ages 12 to 14 was 65 percent for the poorest quintiles, but 92 percent for the richest.

Under the Social Protection Project, the World Bank supported the establishment of Honduras’s conditional cash transfer program as well as the Unique Registry of Participants. The Conditional Cash Transfer Program (initially named Bono 10,000 and later renamed to Bono Vida Mejor), provides cash to extremely poor households, with the amount provided dependent on the number and age of children in the household. As of 2015, the estimated transfer received per household was L 5,500 (US$ 225 equivalent) per year, with a maximum of L 10,000 (approx. US$ 500 equivalent). Health grants were provided to children ages newborn to five years old who completed childhood immunizations, and education grants were provided to children to attend primary and lower secondary school. The program also established systems essential for its successful delivery, including a management information system (MIS); a compliance verification mechanism; the social registry for poverty targeting, known as the Unique Registry of Participants; a grievance redress mechanism; and an improved payment mechanism.

Establishment of the robust social registry known as the Unique Registry of Participants led to the registration of 4.6 million individuals by December 2019, surpassing the target of 4.3 million registrations. The creation of that registry helped support the following results over the project’s implementation period from 2010 to 2018:

The World Bank, through the International Development Association (IDA), provided credits totaling US$ 72.72 million. The original Social Protection Project, approved on June 29, 2010, was financed by IDA credit in the amount of US$ 35.82 million. That project received two additional credits from IDA: the first for US$ 11.9 million, approved on August 8, 2013; and the second for US$ 25 million, approved on March 31, 2015.

The Program is implemented by the Sub-Secretary of Social Integration under the Ministry of Development and Social Inclusion, while the Unique Registry is managed by the National Center for Information on the Social Sector. In addition, the Bank collaborated very closely with the Inter-American Development Bank (IDB), which co-financed the program. All recommendations, policy discussions, and technical assistance provided by the World Bank was developed jointly with the IDB, leading to an effective and impactful engagement with the government.

Regarding the impact of the conditional cash transfer program on their living conditions in Paraíso Zamorano, Cortes y Comayagua, participants in focus group discussions offered the following comments:

“We now have a better life; we have improved our living conditions.” — Participant in a focus group in Cortes

“Before, the floor of my house was made of mud, but now we have a ceiling, a floor made of cement, as well as a latrine.”  — Participant in a focus group in Comayagua

Hondurans continue to experience the impact of rural poverty on human development outcomes. Honduras has a Human Capital Index (HCI) of 0.49, a ranking of 103 out of 157 countries, among the lowest in the Latin America and Caribbean region. This HCI means that a child born in Honduras today is expected to achieve only 49 percent of his or her full potential productivity by age 18.

In November 2018, the Government of Honduras issued an executive decree committing to annually allocate 10 percent of the Solidarity and Social Protection Fund for the Reduction of Extreme Poverty (Fondo de Solidaridad y Protección Social para la Reducción de la Pobreza Extrema) to the program, an amount expected to cover approximately one-third of the annual cash transfers. (The amount of this allocation is proportional to the value-added taxes collected, so the annual amount is not fixed; 10 percent of the fund is estimated to be approximately US$ 20 million  to US$ 25 million a year).