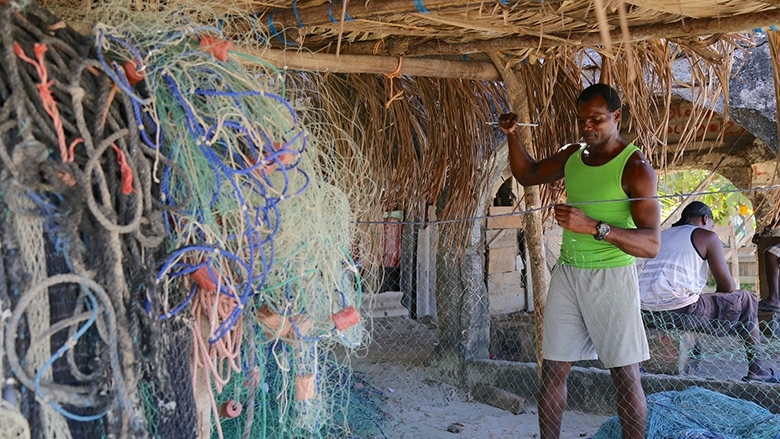 Despite Honduras’s multiple strengths, its progress in poverty reduction has been marked by considerable volatility over the past 30 years. The nation has undertaken a social and economic development agenda to improve basic public services and enhance competitiveness for the rural poor and Indigenous peoples, with important results in agricultural productivity, gender empowerment, water and sanitation, and key drivers of migration.

Honduras is Central America’s second-largest country, with a population of more than 9.2 million and a land area of about 112,000 square kilometers. Honduras possesses multiple strengths that can propel the country toward faster growth and shared prosperity, including its strategic location, a growing industrial base, ongoing efforts to diversify its exports, and a young and growing population. Over the past 30 years, however, Honduras has experienced modest economic growth marked by considerable volatility. The country has the third lowest per capita income in Latin America and the Caribbean. It is among the poorest countries in the Western Hemisphere, and a large share of its population is vulnerable and exposed to regular shocks. Although modest gains were made during the global economic expansion of the mid-2000s, these were wiped out during the final years of the decade, when the impact of the global financial crisis was magnified by Honduras’s domestic political instability. This represented one instance of an unfortunate pattern: it was the fourth time since 1990 that sudden shocks have undone years of progress toward reducing poverty.

Nearly one in six Hondurans (16.5 percent) live on less than US$PPP 1.90 per day, one of the highest poverty rates in Latin America. In 2018, using national official poverty lines, 48.3 percent of the population of more than 9.2 million lived below the poverty line, and 22.9 percent lived below the extreme poverty line. Official data for 2018 shows that rural poverty increased, with 60.1 percent of the rural population living below the rural poverty line. The rural poor rely largely on low-productivity agricultural activities for income, have limited access to basic services, and are highly vulnerable to natural and macroeconomic shocks.

In response to these challenges, World Bank Group (WBG) programs in Honduras have focused on targeting the vulnerable poor in rural areas by supporting activities that boost competitiveness and foster inclusive growth. The WBG has been a major partner in increasing social protection targeting and coverage; supporting local communities with social and economic opportunities, particularly in the agriculture sector; and improving access to markets and credit as well as to basic infrastructure services. The WBG has also advocated for strengthened development roles for women and Indigenous peoples, including managing agribusinesses and leading citizen security initiatives. Engagement in Honduras also includes efforts by the International Finance Corporation (IFC) and the Multilateral Investment Guarantee Agency (MIGA), which work closely with the Bank to explore synergies and deepen the impact of ongoing and future programs in the country.

The Rural Competitiveness Project (COMRURAL) has helped to increase productivity and competitiveness among small-scale producer organizations by facilitating their engagement in productive alliances. The project has contributed toward making value chains not only more competitive, but also more inclusive for vulnerable groups such as youth, women, and Indigenous groups, creating new and higher-skilled employment opportunities. From 2008 to 2020, this WBG-financed project has supported 89 business plans, strategic investments needed to improve competitiveness, and linkages in productive alliances. These investments have resulted in an estimated 28 percent increase in incomes among producer organizations, benefiting 7,200 rural families, of which 49 percent are Indigenous to the Lenca and Maya-Chorti ethnic groups.

The COMRURAL Project goes beyond improving production, however. Other results achieved include the following:

From 2006 to 2016, the Rural Infrastructure Project improved access, quality, and sustainability of basic infrastructure services, including 113 water and sanitation projects and 4,893 latrines, benefiting 20,751 families in 112 communities. In addition, 8,550 rural electrification projects were financed, of which 98 percent were solar photovoltaic energy systems, and 844 kilometers of power lines were rehabilitated, benefiting 282 communities (approximately 84,220 people). The project also contributed to the rehabilitation of 666.93 kilometers of rural roads and provided adequate routine maintenance mechanisms for 593 kilometers.

In supporting the government’s efforts to strengthen capacity for integrated disaster risk management at the municipal and national levels, from 2013 to date the Disaster Risk Management Project has benefited more than one million people and contributed to the design and adoption of disaster risk management and emergency response plans by 18 participating municipalities. The project also supported 34 cities in improving livability, sustainability, or management.

By supporting the government’s efforts to improve governance and transparency in land administration, from 2011 to 2017 the Second Land Administration Project worked to strengthen property rights and secure land tenure by upgrading the Unified Registry System for land titling, reducing the processing time for registration of land titles, and issuing more than 50,000 land titles in rural areas. Setting a historic precedent, three collective land titles were granted to territorial councils of the Miskito people (Katainasta, Auhya Yari, and Finzmos), securing the property rights of 78 Miskito Indigenous communities.

Enhancing the Capacity of Local Governments to Deliver Services

As of November 2019, the active World Bank Group portfolio in Honduras equaled US$ 1.07 billion. The International Development Association (IDA) portfolio consists of six projects, totaling US$ 258.95 million (including US$ 228.95 million in IDA commitments, plus US$ 30 million from the GAFSP). The portfolio spans a number of sectors, including social protection, rural competitiveness, and disaster risk management and is complemented by trust funds and analytical and advisory services focused on governance, education, and climate-change resilience. The IFC’s  active committed portfolio totals US$ 403.54 million (US$ 190.07 million from IFC’s own account, and US$ 213.47 million mobilized from other lenders and investors, including IFC’s asset management company). Most of IFC’s activities have focused on the financial and infrastructure sectors, particularly in renewable energy. MIGA has US$ 265.42 million in gross exposure in three projects, focusing on renewable energy and transport.

development challenges. A number of partnerships foster close collaboration in various sectors, including: (i) coordinating with the Inter-American Development Bank (IDB) to support the conditional cash transfer social protection program Bono Vida Mejor, which benefits more than 270,000 extreme poor households nationwide; (ii) leveraging with USAID and partnering with the GAFSP to implement a trust fund benefiting 12,000 households as part of the Alliance for the Dry Corridor; (iii) partnering with Swiss Cooperation and the Food and Agriculture Organization to finance and support COMRURAL in strengthening agricultural value chains and diversifying rural economies; (iv) supporting Open Government Initiatives, particularly the Construction Sector Transparency Initiative and Open Government Partnership, to work with government, civil society, and USAID; and (v) partnering with the Global Partnership for Education in developing the 2017–2030 Education Sector Strategy. The WBG also engages with the donor community to examine how best to support the government’s initiatives to strengthen protection of Indigenous peoples’ rights.

Omar Rodríguez is from the municipality of Las Capucas, Copán, where one of the best-known coffee cooperatives in the country, recognized not only for the quality of its product but also for its export capacity, is located. For many small producers like Omar, the improvements made thanks to COMRURAL’s support have changed their lives. “All of this is a dream come true.” The coffee cooperatives participating in COMRURAL have increased exports by 12.8 percent (equivalent to US$ 6.2 million); and with the support of the project in obtaining Fair Trade certification, investments in social responsibility activities, such as medical care, schooling, and reforestation of forests and watersheds, have increased by over US$ 620,000. “Coffee improves producers’ incomes, quality of life, and education,” comments Omar. “I was born in a generation where most of the producers studied until the sixth grade. Today, many of our children reach high school. We have to continue working so that in the future they can make the leap to university.” The World Bank, through its support to COMRURAL, will continue to work toward this goal.

María Eulogia Izaguirre lives in San Miguelito, in the department of Francisco Morazán. Before participating in PROSASUR, she and her neighbors had little knowledge or resources to improve their children’s growth and nutrition. As she describes, “The household hygiene plan is a really nice program; the volunteers come on the 13th of every month to weigh the babies, to see if our children are gaining weight or staying the same, to make sure they’re growing. It might seem insignificant, but that has a huge impact because none of us have scales in our homes; we don’t have any way to know. The project is quite necessary. They also teach us how to make sure our children keep growing, how to give them fluids if they need them, how to prepare their food the right way, and it’s really beautiful.”

Rita Batres lives in San Francisco de Yojoa, in a neighborhood that experienced flooding with every rainfall. “It was really worrisome whenever it rained here—because our houses would flood every time.” The work of the Disaster Risk Management project and its implementing unit, the Permanent Contingencies Commission (Comisión de Permanentes Contingencias, COPECO), supported the town’s community-led Local Emergencies Committee in designing and executing a plan to construct a protective barrier on the banks of the Chiquito river. The project directly benefited 1,500 people and indirectly benefited an additional 1,000 people. As Rita declared, “We’ve never had a project like this . . . and now we’re happy that we achieved what we set out to achieve. Now we can sleep peacefully every time it rains.” The World Bank through its support to COPECO will continue to help Honduras’s most vulnerable communities prepare for and mitigate the effects of disasters.

The WBG will continue its partnership with Honduras in line with the Country Partnership Framework 2016–2020 to support government efforts to foster social inclusion, improve conditions for growth, reduce vulnerabilities, and enhance resilience, with crosscutting themes of building institutions and gender equity. The current and new IDA portfolio will continue to address development priorities through investments that build on successful operations in rural competitiveness, water and sanitation, disaster risk management, social protection, and education. This support will be complemented by technical assistance, advisory services, and knowledge products across sectors. The IFC will continue to support the financial and infrastructure sectors, particularly renewable energy, and MIGA will continue its engagement in the renewable energy and transport sectors. The WB, IFC, and MIGA will continue to coordinate closely with each other to explore synergies and catalyze solutions for key development issues, such as renewable energy, transport, and competitiveness.