Strengthening Conditional Cash Transfers and the Single Registry in Brazil: A Second-Generation Platform for Service Delivery for the Poor 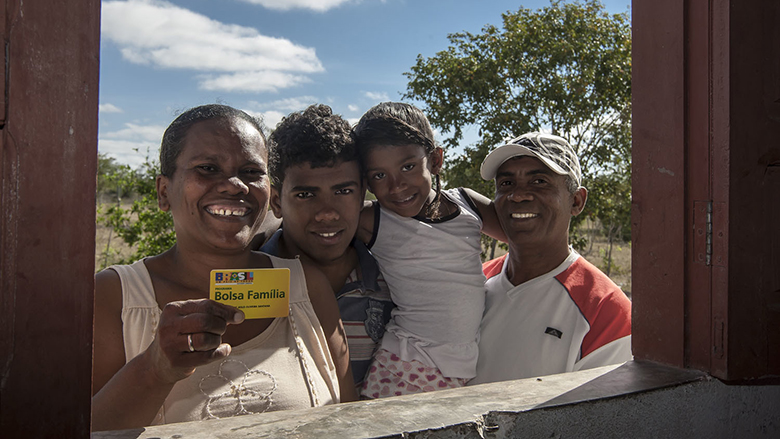 Before the 21st century, Brazil faced one of the world’s highest levels of income inequality and a steep gap between the poor and nonpoor in access to basic human development services. These inequalities, in turn, resulted in gaps in human development outcomes, such as education achievement and nutrition. In 2003, the Brazilian government merged several social programs into one unified conditional cash transfer program: Bolsa Família (BFP). Remaining concerns included the need for (i) further systematization of conditionality monitoring, delivery at the municipal level, and customization to local conditions and special populations; and (ii) a platform to connect beneficiaries with additional services, such as rural and urban productive inclusion, early childhood development, and financial inclusion.

From the inception of Bolsa Família, the World Bank supported it and helped build the capacity of its delivery institution. The Second Bolsa Família Project aimed to improve BFP’s overall governance by enhancing basic program management, as well as through oversight and control functions, in three axes: the registry of beneficiaries (Cadastro Único), management of benefits, and electronic monitoring of compliance with education and health conditionalities. To this end, project financing was used (i) to train and provide technical assistance to state and municipalities to support the use of Cadastro Único as the main mechanism for selecting BFP’s target population; (ii) to create municipal- and state-level delivery units to support BFP design and monitoring and to interact with social service providers, including transfer of dedicated resources to serve the BF population; and (iii) to configure Cadastro Único to allow multiple public agencies to select beneficiaries from its database of low-income families.

The project’s main objective was to strengthen the BFP’s ability to achieve its objectives of reducing poverty and inequality and promoting human capital development. The following outcomes were observed:

• Estimates show that social transfers, including both Bolsa Família and Social Pensions (Benefício de Prestação Continuada, BPC), accounted for a 58 percent decline in extreme poverty, a 30 percent decline in poverty, and a 41 percent fall in inequality between 2004 and 2014.

• BFP increased its coverage and improved its monitoring of conditionalities. By the project’s closing in December 2018, BFP was reaching its highest number of beneficiaries to that date: a total of 46.9 million people.

• Furthermore, by the end of the project, all states harmonized their own cash transfers with Bolsa Família.

• By the end of the project, in addition to Bolsa Família, 24 other federal programs used Cadastro Único to identify poor or vulnerable beneficiaries. School attendance by BF beneficiary children (a condition for receiving the benefit) reached 91 percent during the project’s life, the highest level since the program’s introduction.

An array of external studies validated the positive impact of the project on human capital outcomes:

• BFP conditionalities (implementation of which the project strengthened) were shown to have positive effects on education indicators, such as higher levels of school enrollment and school progression and lower dropout rates.

• Evidence indicates positive impacts on the health, nutrition, and survival of targeted individuals, including significant reduction in the under-five mortality rate and decreases in the incidence of low birth weight among beneficiary children.

The World Bank, through the International Bank for Reconstruction and Development (IBRD), provided a loan in the amount of US$ 200 million. This loan covered two components: (i) US$ 185 million in co-financing for a small share of the Bolsa Família cash transfers to poor families (BFP transfers more than US$ 10 billion per year); and (ii) technical assistance and project implementation (US$ 15 million).

The Government of Brazil provided US$ 7.5 million to co-finance technical assistance activities. In addition, to complement the Bank-financed project, the Ministry of Social Development (MDS) independently took advantage of other partnerships, particularly with the UN system (Food Agriculture Organization, United Nations Education, Social, and Culture Organization, and United Nations Children’s Fund), to conduct specific technical assistance activities in areas such as agricultural development programs and early childhood development intervention design. The World Bank also partnered with MDS, the United Nations Program for Development, and the Institute for Applied Economic Research to run the Brazil Learning Initiative for a World Without Poverty, a parallel activity to showcase for other countries Brazil’s innovations and experience with BFP design and implementation.

Bolsa Família, the primary program supported by the project, benefits more than 42 million citizens, most of whom are children living in the bottom income quintile. About a third live in rural areas and more than half in the Northeast Region, which exhibits the nation’s highest poverty rates. Women represent about 88.8 percent of direct cash transfer recipients, since transfer payments are made directly to the mother of beneficiary children whenever possible. The transfer represents only 13 percent of the average income of beneficiary families. In addition, about half the Brazilian population is enrolled in Cadastro Único, which was strengthened in design and roll-out through the project. Cadastro Único families have per capita incomes below half of the minimum wage; by registering, they can access a suite of means-tested programs.

By December 2018, 24 social programs, both within and outside MDS, relied on the enhanced Cadastro Único to identify vulnerable families at different income eligibility thresholds. This includes not only complementary cash transfers, but, more importantly, services and in-kind transfers, such as utility tariff discounts and other forms of fee waivers. Based on the results achieved with the project, the government is now working to develop real interoperability between Cadastro Único and other public registries to facilitate updating information and to provide real-time beneficiary status information across services. Bolsa Família reached full institutionalization within Brazil’s social protection system. While specific design elements and eligibility criteria continue to be intensely debated by the public, the program’s existence is broadly accepted and Bolsa Família now serves as a platform to deliver complementary interventions.