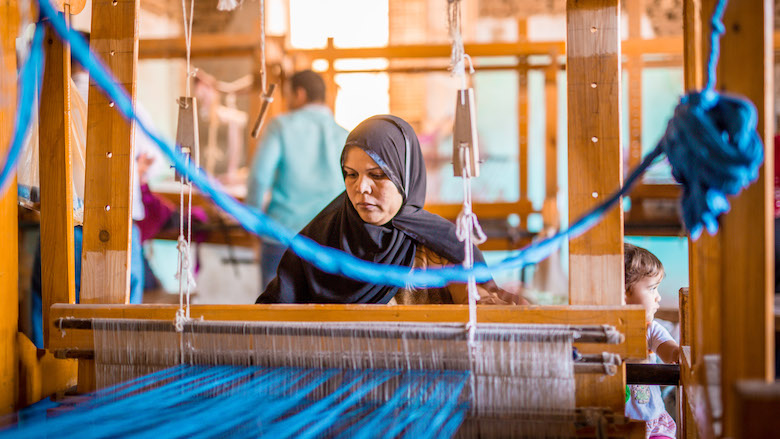 Through US$300 million of International Bank for Reconstruction and Development (IBRD) financing for 5 years, the Promoting Innovation for Inclusive Financial Access Project has enabled 174,588 entrepreneurs to start their businesses, 73,856 of whom were women. Implementation has been highly impactful and has been successful in reaching out to under-served governorates (40% of beneficiaries in lagging regions), as well as creating 302,937 job opportunities.

Despite being integral to the economy’s development and recovery from the economic slowdown following the 2011 revolution, Egypt’s micro, small and medium enterprises have been suffering from the lack of facilitated access to funding that is needed to launch businesses, which reached its peak in 2014. This challenge was mainly attributed to the lack of financial intermediaries to which MSMEs can resort to for funding requests, as well as the lack of tailored financial products offered to MSMEs.

Due to the unstable economic conditions at the time, banks were reluctant to lend to MSMEs, especially young and new ones, due to the perceived associated risk. At the same time, MSMEs faced problems obtaining finance from other capital market vehicles. Venture capital and angel investors had a limited, although growing presence in the Egyptian market.

As a result, MSMEs often resort to alternative sources of finance, relying on personal savings or inheritance to raise capital, while only a minority of SMEs had access to the formal market.

To facilitate SMEs’ access to funding, the project provided a line of credit to the Micro, Small, and Medium Enterprises Development Agency (MSMEDA), formerly the Social Fund for Development (SFD), the apex institution for financing MSMEs. The funding was provided to micro and small enterprises through eligible participating financial institutions (PFIS) (i.e: Banks, Leasing companies and Microfinance Companies, and NGOs).

MSMEDA was responsible for communicating the features of the loan to the financial institutions; appraising, negotiating, overseeing implementation of contracts with banks/non-banks, and monitoring the quality of their portfolios. PFIs provided credit, equity participation, and/or convertible debt to Micro and Small Enterprises according to the nature of the PFI. MSMEDA reviewed funding proposals and identified which institutions to lend to.

The project provided a wide variety of funding mechanisms and tools to cover the needs of all entrepreneurs. The mechanisms/tools included: a line of credit for non-governmental organizations and microfinance institutions, a line of credit through financial leasing companies, and equity investments via venture capital companies (VCs).

Over its 5 Year lifetime (2014 – 2019), the implementing Regional MSME Development  Facility focused on three main pillars in the Egypt program, namely: (i) developing the enabling environment for Micro and  Small Enterprises  through supporting policy, legal, and regulatory reforms to facilitate their access to finance; (ii) providing advisory services to financial institutions that serve Micro and Small Enterprises  to attain a more inclusive system, focusing on youth, women and regional disparities; and (iii) building the capacity of MSMEs through entrepreneur networks, mentoring, and business incubator-type services.

Throughout its life time (April 2014- December 2019), the project benefitted thousands of Egyptian entrepreneurs – through the provision of micro and small loans through intermediaries whether Banks or Non-Banks such as NGOs and Leasing Companies as follows:

This IBRD-funded project was a continuation of the World Bank Group’s contribution to develop the  micro and small enterprises and Entrepreneurship ecosystem. This project built on the design and lessons learnt from the “Enhancing Access for Micro and Small Enterprises in Egypt”, a $300 million operation that closed in December 2015.

Between 2012 and 2018, through the Facility, the IBRD and IFC delivered nearly 90 technical assistance projects to government organizations, financial institutions, and MSMEs in Egypt, Jordan, Lebanon, Morocco, Tunisia, and the West Bank and Gaza, all focused on strengthening the provision of finance to MSMEs, allowing the sector to grow towards its potential as an engine of job creation and inclusive economic growth.

Building on the project’s success, the US$200 million “Catalyzing Entrepreneurship for Job Creation” program was declared effective on January 15, 2020. This new program builds on the Promoting Innovation for Inclusive Financial Access Project’s success and aims to  address the major obstacles that entrepreneurs face when launching new businesses.

This project will channel US$145 million mainly through non-bank financial institutions offering loans to MSMEs. The project will also fund coaching opportunities for new businesses through the entrepreneurial lifecycle to build the necessary skills and capacity for success. To build up the early-stage investment ecosystem in Egypt, the project will invest US$50 million in privately managed risk capital intermediaries, such as angel funds, accelerators, VC funds, and investment companies.

The project also aims to increase the supply of seed, early-stage, and venture capital going to riskier and innovative start-ups and young  micro, small and medium enterprises with high potential for growth and job creation.

“I got married at the age of 19 and got a divorce shortly after while 7 months pregnant” said Nour Al Hayah from Upper Egypt. “The first thing that occurred to me after giving birth to my son was that I had to complete my education, so I got my high school degree. After that I thought to start a business through the micro-finance loan program. I got a loan, bought one sewing machine and with it other necessary materials, and began my tailoring business.”

Nour now owns 30 sewing machines and provides vocational training to her village’s widows and divorced women, enabling them to support their families.