Toward Better Economic Opportunities for Women: Lessons from Malaysia 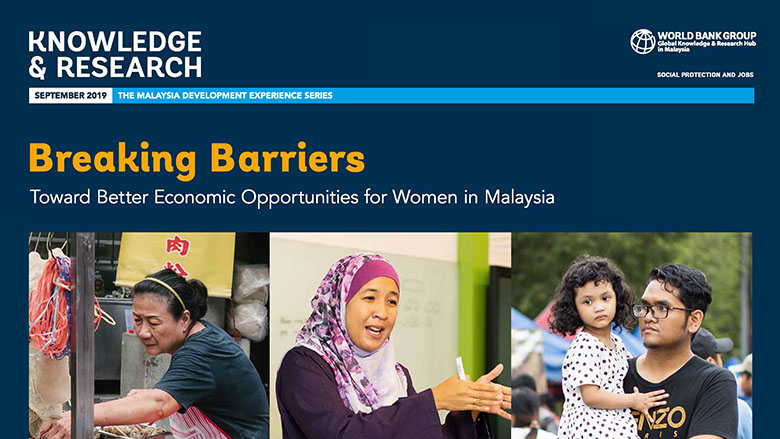 Following in-depth analytical work by the World Bank, Malaysia has moved toward improving economic opportunities for women through increased allocation of about US$7 million for child care in the 2020 Budget, the introduction of an incentive to encourage female labor force participation and enhanced efforts to revise the Employment Act and introduce a Sexual Harassment Act to improve support for parents in line with international legal norms.

As birth rates in Malaysia have been dwindling and life expectancy has been increasing, the share of Malaysia’s working-age population is expected to start shrinking in 2020. That demographic change has made it imperative to move to a growth model that relies more on the efficient use of land, labor and capital. Malaysia has the third lowest female labor force participation rate in the Association of Southeast Asian Nations (ASEAN) at 55.2 percent, which is also lower than its peers at similar income levels. At the same time, Malaysia also has a reversed gender gap in school enrolment at all levels and in educational attainment. In this context, increasing the number of women who are able to access productive jobs has been a core development objective in its own right, but also holds the promise for Malaysia’s continued economic growth.  Macroeconomic simulations have implied that closing gaps between men’s and women’s economic opportunities could boost Malaysia’s income per capita by 26.2 percent—an average annual income gain of about US$2,230 for each Malaysian.

The report combined quantitative, qualitative and legal research and was undertaken jointly with researchers from local and international universities. Close outreach and engagement with government counterparts during all stages of the preparation and dissemination of the report was critical, as was engagement with a broader set of stakeholders such as non-governmental organizations, civil society organizations, the private sector, and the judiciary.

Creating better economic opportunities for women is now front and center of Malaysia’s development efforts, as evidenced by

More specifically, the creation of better economic opportunities for women was one of the main themes of the Budget Speech 2020, one of the most important political events of the year in which the Minister of Finance presents the Government's plans concerning fiscal, economic and social policy to the lower house of Malaysia’s parliament. Citing the World Bank study on the topic, The speech made explicit reference to the study and included a number of crucial policy recommendations made in the study, including increased investments in child care (i.e., an additional allocation of about US$7 million), the introduction of an incentive to encourage female labor force participation (i.e., through the Women@Work initiative which provides about US$120 per month for two years for women returning to work, and a corresponding hiring incentive for employers of up to US$70 per month for two years) and enhanced efforts to revise the Employment Act to increase maternity leave from 60 days to 90 days, introduce new provisions on discrimination based on gender, and improved protection against sexual harassment.

Following the Budget Speech, the Government has moved quickly to implement these initiatives. In particular, it has constituted an interministerial working group on improved childcare provision and invited the World Bank to join this working group as a technical advisor. In addition, revised versions of the Employment Act and other labor laws and a new Sexual Harassment Act are expected to be tabled in Parliament soon.

More broadly, there has been significantly increased awareness that the promotion of economic opportunities for women is one of the most promising avenues for Malaysia’s future development. This is evidenced by various speeches on the topic by the Deputy Prime Minister, the Minister of Finance, the Minister of Human Resources and others (all directly citing the Bank’s engagement). In addition, the launch event for the Bank report drew a diverse audience of about 300 attendees, many of them high-level, and resulted in more than 20 local and international media citations, and requests for briefings by Members of Parliament and other top decision makers, for TV, radio and newspaper interviews, and for and follow-up dissemination events inside and outside of Malaysia (e.g., at INSEAD and ISEAS in Singapore).

The Bank’s analytical and advisory engagement on women’s economic opportunities in Malaysia was implemented by a cross-sectoral team comprising the Social Protection and Jobs Global Practice and the Gender Focal Point for Malaysia. It was financed through the broader Malaysia program of research and analysis on Boosting Social Protection and Jobs Outcomes, which has the broader objective to enhance effective knowledge sharing of Malaysia's development experience in boosting social protection and jobs outcomes. In turn, this program has been financed through an Office Support Agreement (OSA) between the Government of Malaysia and the World Bank.

The report Breaking Barriers – Toward Better Economic Opportunities for Women in Malaysia was implemented jointly with researchers from local and international universities. In particular, the Bank collaborated with a team of researchers from the Tun Fatimah Hashim Women Leadership Centre at Universiti Kebangsaan Malaysia for the implementation of qualitative field research, in partnership with an experienced international consultant from a university in Germany. This partnership contributed to both the collection of the high-quality localized qualitative evidence and capacity building among the academic community in Malaysia.

It is expected that the significant Government efforts currently underway to improve women’s economic opportunities will address all the main policy dimensions highlighted in the Bank’s study. In particular, an inter-ministerial working group is tasked with expanding the availability, quality and affordability of child care to enable more women to stay in the labor market and to work in more productive jobs. In addition, pilots are under way to strengthen the protection of informal workers and the productivity of workers and business owners to harness women’s full economic potential. Finally, the Government is pursuing planned reforms of the legal environment and improving support for parents, in line with international legal norms.

The Bank’s work also highlighted the importance of improving the availability, quality and affordability of elderly care. Given rapid demographic change, this recommendation garnered a lot of interest from Government counterparts and led to a request for a follow-up study on aging in Malaysia. This study is currently under preparation and will document the relevant context and state of preparedness, investigate key policy areas (i.e. labor market policies and pension policies in addition to aged care policies), and develop actionable policy recommendations.

Beneficiaries are all women – and men – in Malaysia. As evidenced by the qualitative research implemented by the World Bank and Universiti Kebangsaan Malaysia, women have faced significant challenges in accessing child care. One 36-year old says “I live in [a social housing complex]. We do not have any kindergarten there. […] So, many of our children are not able to attend one. […]. [Even if we had a kindergarten], they would not accept children of the age of 4 or 5 years. It is kind of difficult for us.” Increased investments in child care directly addresses these challenges.