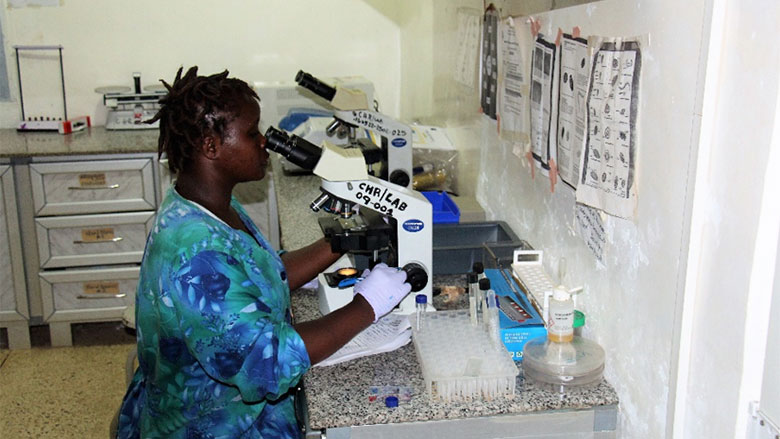 Since the end of the conflict, the World Bank program in Liberia has mainly financed the revitalization of key infrastructure (energy & roads) which are vital for economic growth. Enhancing human capital in health, education and youth development has been financed mainly through trust funds although recently approved International Development Association (IDA) programs will increase support in these sectors. Across the portfolio, at least 50% of project beneficiaries are women.

Liberia is a fragile state with a history of two devastating civil wars (1989-2003) that severely disrupted the economy and destroyed vital infrastructure (electricity, roads, water & sewage). Re-building road and electricity infrastructure has been a daunting task. Liberia still has one of the lowest electrification rates in the world where only 18% of the population has access and of which only 5% are covered by the grid with the rest connected to diesel generators. In roads, only 42% (2015) of the population had access to an all-season road within an approximate two-kilometer walking distance. Today, the economy remains fragile and has in recent years been hit by multiple shocks arising from a sharp decline in global commodity prices, dwindling donor inflows, the slowdown in foreign direct investment, and the Ebola crisis (2014-2016). The projected GDP growth in 2019 was revised downward from 0.4% to -1.4%, compared to a growth of 1.2% in 2018. Inflationary pressures persisted during the first half of 2019, coupled with continued depreciation of the local currency. Economic growth in recent years has been driven mainly by modest performance in the mining sector, namely iron ore and gold. Private sector engagement in key productive areas including agriculture, fisheries, and forestry, will be necessary to ensure sustained economic growth in the long-run. Moving forward, renewed growth will require an inclusive approach that emphasizes the development of human capital. Liberia’s Human Capital Index is 154 out of 157 countries, with a Human Capital Index of 0.32 implying that a child born in Liberia today will be 32% as productive compared to a child who has enjoyed complete education and health. Inclusive growth will also require engaging large segments of the population into the national economy including unemployed youth, and the growing urban population.

IDA programs have focused on developing policies and reforms to strengthen governance and institutions in: land administration, health systems, quality of education, enhancement of public sector, road management, statistics capacity, and fisheries reform. In transport, a new public-private partnership (PPP) financing model aims to leverage significant funds from the private sector to build the national road network, which would complement existing programs that finance the rehabilitation of key road corridors, policy reform and capacity building of technical staff. In the energy sector, the Bank-supported national electrification strategy will help identify least cost options and investment requirements in the country towards the goal of achieving universal access to electricity. Capacity building in statistics, financed the collection of data that has contributed to national dialogue and development planning including the country’s first twelve-month household income expenditure survey of 2016. In all sectors, IDA programs have been strategically designed to leverage funding from trust funds to increase the development impact. Since 2007, the Liberia Reconstruction Trust Fund has raised close to $218 million in support of roads, and waste management programs.

A total of 246 kilometers of road connecting the Monrovia-Gbarnga-Ganta-Guinea corridor were rehabilitated, reducing travel time by 50%, and improving access to the port of Monrovia. In addition to rehabilitation, the roads program has financed capacity building activities including: on the job training on different technical areas, design of key policies (the National Road Fund Act, the Road Act and the Road Agency Act), development of a multi-modal transport plan together with a strategic investment plan, and road safety analysis coupled with road safety training for technical staff. Of major importance is the technical support for the operationalization of the newly established National Road Fund (2018) which is designed to allocate up to 40% of annual revenues towards road rehabilitation projects. Institutionally, operationalization of the Fund would also include the proposal of critical reforms within the sector and the development of the human capital necessary to transition the Infrastructure Implementation Unit into a future road agency.

The Bank has supported electrification in Liberia with a programmatic approach aimed at scaling up grid and off-grid options. A 10 Megawatts thermal plant was financed at a time when the main hydropower plant was undergoing rehabilitation. Heavy fuel oil (HFO) storage tanks, and associated facilities, were financed to help the transition from high cost diesel to lower cost HFO. Along key corridors, the Bank has extended electricity to 15 communities and connected 46,500 households and 450 commercial customers (to date: 30,000 customers have been connected). To ensure the sustainability and efficiency of these connections, the Bank has also prioritized the expansion and rehabilitation of transmission and distribution. Beyond the main urban center, Monrovia, 16,200 people in remote rural areas of the country have benefited from stand-alone systems including: solar lanterns and small solar home systems. On the policy level, the Bank has supported the development of an optimization hydropower study to link Liberia to the regional energy market allowing it to switch from a seasonal supply to a year-round hydropower/solar based supply of electricity.

The health program in Liberia has financed the construction of critical infrastructure and capacity building. In infrastructure, a new hospital, the Redemption Hospital is under construction and will be the largest referral center for maternal and child care in the country. In addition, the Bank has also financed the construction of: (i) 48 isolation and ebola treatment centers centers and maternal-child health centers; (ii) staff housing; and (iii) two student dormitory buildings (total capacity of 96 students) that include 2 classrooms buildings and a mini-lab for undergraduate medical students. In capacity building, training has been delivered to different health providers, including 28 post graduates in medicine, pediatrics, obstetrics and surgery, and mental health care providers (first time in country). Financing has also supported comprehensive maternal health care at seven hospitals and one health center; and referral systems in targeted areas. A performance-based financing model has been adopted and launched in 8 hospitals across three counties. After and during Ebola, the disease surveillance has been a key priority under the World Bank program including coordination with in-country partners to reduce the impact of any future outbreaks that may be devastating to the country.

Since 2017, the Youth Opportunities Project has enrolled 8,144 youths, 50 percent of which are women. Through a productive public works and life skills support activity, the Project has enrolled 7,344 beneficiaries in hard to reach communities in rural Liberia. Beneficiaries of this component have cultivated over 8,000 acres of farmland with a variety of food crops. The second component, household enterprise support, has helped to establish 99 small businesses with training and business startup grants. The Project was recently in the news highlighting the graduation of 440 youth from a Business Startup training.

Some sector/country briefs might have some results linked to IDA and others to IBRD activities, please highlight IDA results separately below.

Note: Almost all of our programs have a mix of IDA and trust fund resources, hence it is difficult to separate the results to only IDA, as the results can be attributed to a combination of sources of financing.

As of August 2019, the active portfolio is composed of 19 projects, financed from multiple sources including IDA (national & regional) and sector specific/thematic trust funds. The value of the portfolio, including all sources of finance is just over $1 billion ($1,093.7 million), 80% ($873.5 million) of which consist of IDA resources (Nat & Reg). Contributions from development partners to active projects through single and multi-donor trust funds account for close to $220 million. As of August 2019, 53% of the portfolio has been disbursed mainly towards the support of key infrastructure sectors (roads & energy), health systems strengthening & disease surveillance (Ebola), agriculture, youth development, waste management, and water supply.

In 2018/19 the World Bank was the co-chair of the Consultative Partners Group (CPG), an in-country donor coordinating body formed by heads of agencies. The CPG is a forum formed around key development challenges in the country whereby financing is coordinated with an aim to enhance development impact. In addition, the Liberia country program has received significant contributions from development partners. The Liberia Reconstruction Trust Fund has been financed by Germany (KfW), the United Kingdom (DFID), the European Union, Sweden (Sida), Irish Aid and Norway in support of: transport, energy, and waste management. In the areas of governance and human development, our key partners are the United States Agency for International Development (USAID), the African Development Bank (AfDB), the European Union, and Sida. In health and education, major multi-donor trust funds like the Global Financing Facility (GFF), the Global Environment Facility (GEF), and the Global Partnership for Education (GPE) have provided seed funding for core work in these sectors. Also in health, the GFF leads the dialogue (and convening joint missions) with development partners committed to the country’s investment case for maternal, child and adolescent health (USAID, Global Fund, United Nations Children’s Fund (UNICEF), World Health Organization (WHO), the United Nations Population Fund (UNFPA), the Government of Japan, The Vaccine Alliance (GAVI), the German Federal Ministry of Economic Cooperation and Development (BMZ), International Planned Parenthood Federation and Last Mile Health). In productive sectors, Norway has been the only financier of the World Bank program, and in agriculture, a close partnership with the International Fund for Agricultural Development (IFAD) could double the recently approved STAR-P IDA program.

The recent Country Partnership Framework (CPF) (Fiscal Year 2019 - Fiscal Year 2024) strives to achieve pro-poor, private sector-led growth underpinned by human-capital development, institutional capacity-building, infrastructure development, and economic diversification. The CPF identifies weak governance, inadequate economic and social inclusion, breakdown of social cohesion, youth unemployment, gender inequality, and regional disparities as key drivers of fragility and conflict. The CPF pillars are: (i) strengthening institutions and creating an enabling environment for inclusive and sustainable growth; (ii) building human capital to seize new economic opportunities; and (iii) narrowing the infrastructure gap to foster more equitable nationwide development. Specifically, in health, Liberia has some of the highest maternal mortality and teenage pregnancy rates in the world. The future IDA health program will focus on addressing key binding constraints in: human resource management, drug procurement & supply chain management systems, public financial management & efficiency, bringing citizen voice into health governance, and improving transparency & accountability at all levels of the system. In the energy sector, with the rehabilitation of the main hydropower completed recently, Liberia now has adequate capacity to meet the demand during the rainy season (from May to December) through low-cost hydropower allowing for opportunities to expand the network. However, meeting the dry season needs (from January to April) requires expensive thermal plants. To replace the costly thermal power, Bank support is helping to connect Liberia to the neighboring countries offering Liberia access to a cheaper and more reliable electricity supply. In addition, the future Cote d'Ivoire, Liberia, Sierra Leone, and Guinea (CLSG) line aims to: (i) increase the supply of cost-effective electricity during the dry season, (ii) increase revenues for the national utility, (iii) expand electrification to remote areas, and (iv) open access to larger markets nationally and regionally.